The Assembly of the People of Kazakhstan is a structure uniting over 100 ethnic communities, which plays an important role in our republic’s development. Besides, the Assembly promotes Kazakhstan’s interethnic policy globally.
28.11.2014 06:41 3373 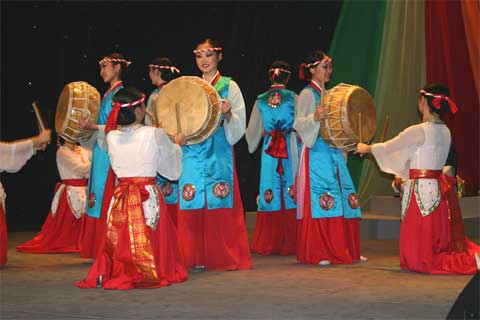 The Assembly of the People of Kazakhstan is a structure uniting over 100 ethnic communities, which plays an important role in our republic’s development. Besides, the Assembly promotes Kazakhstan’s interethnic policy globally.

Today, it consists of 394 members. One of them is the Korean community. Koreans arrived in Kazakhstan in the course of migration from the Russian Far East in 1937. Like other ethnic communities, Koreans contribute to the development of the country that has become their Motherland. Being active in every sphere of public life, the Koreans have been part of the literary progress.

The Department for Korean Literature of the Writers’ Union of Kazakhstan was founded in 1977. Korean authors wrote their books to present the sophisticated interrelation of their ancient national literature and modern trends.

Kim Dyun (1900 – 1980), poet and writer, is believed to be one of the most outstanding representatives of the community. He is the author of the poem “Aliya”, which is dedicated to a brave Kazakh girl, A. Moldagulova (1969, Korean), the novel “The Case of Fifty Thousand Wons”, which depicts the struggle of Korean patriots. He has staged over 100 plays by Korean authors at the Republican Korean Theater since 1937. Plays by Kazakh writers have been presented in Korean as well. They included “Karagoz” and “Kobylandy” by M.Auezov, “Kozy Korpesh – Bayan Slu” by G.Musrepov, and works by O.Bodykov and K.Mukhamedzhanov. Works by Korean authors residing in Kazakhstan have been published in compilations titled “Korean Poetry” (1958), “The Steppe Tulip” (1973), “Motifs of the Syr Darya” (1975), and “Sunflowers” (1982). Besides, epic books by Kim Dyun, works by Yen Sennen, and other Korean writers have been published in Korean. They include “The Land of Happiness” (1988), “Blossom, Steppe” (1988), and plays by Han Din (1988).

Yen Sen Nen (1909–1979) was born in East Russia. He was one of the founders of the Soviet Korean Theater. Besides, he was the author of many Soviet Korean songs. From 1932 till the end of his life, he worked as a stage director at the Korean Theater. His first play “Victory and Love” (1924) brought him the first prize at the Far East Krai Competition.   He wrote 14 plays. The play “Chun Hyan Den” has been staged by the Korean Theater since 1944. He also wrote numerous poems, for which he was awarded the First Lenin Kichi Prize in 1970. In 1952, Yen Sen Nen was conferred the title of a Merited Artist of the Kazakh SSR. He was awarded the medal “Veteran of Labor”.

Pak Ir Petr (1912–2001) was born on May 1 in the Far East, in the village Yanchikhe. After teaching courses, he was working as a teacher in 1930–1937; in 1941, he graduated from N.K.Krupskaya Leningrad Pedagogical Institute, where he studied part-time, to teach in schools and higher education establishments in Osh, Ozgen, Frunze, and Almaty. For some time, he worked as an associate professor at Kursk Pedagogical Institute. In 1968, he became an Associate Professor of the Department for   Philosophy and Logic, Kazakh State University, and Candidate of Philosophy. Pak Ir Petr translated fiction from Korean and Russian. His major works include “Korean Sextains” (1956), the Korean book of poems: Desen Sidib” (1958), “Five Colors of Clouds” by Pak Inno (1962), “Wild Rosemary Flower” by Kim Sovol (М., 1962), “Song at the Lake” (Medieval Korean Lyrical Poetry (М., 1971), “Wild Rosemary in the Steppe” (Poems by Kazakhstani Korean Authors, 1973), etc.

Thai Dyan Chun (1911–1960) was born on September 10 in Dyafigou in the Far East. He graduated from the Philology Faculty of Vladivostok Pedagogic Institute. He worked as an actor and Head of the Literary Department at the Republican Korean Theater. Thai Dyan Chun is the author of several theater plays. His first play titled “The Line” was written in 1934. In total, he wrote about ten plays on various subjects.  His play “South from Parallel 38” translated by I.Shtok was staged by Moscow Theater and a number of theaters abroad. He was awarded the title of Merited Artist of the Kazakh SSR.

Kim Kwan Hen (1919–2002) was born on December 27 in Putilovka, Ussuriysk  Oslast, Primorsk Kray, Russia. Graduate of the CPSU Central Committee Higher Party School. He covered the long way from a copyreader at the Lenin Kichi newspaper to an editor.  In 1956, his poem “Oknan” appeared in the newspaper; later, such works as “The Thoughts of a Man Walking to Work” (1964), “Sprouts” (1976), “Stargazing” (1970), the ballad “Our Pride”, the short stories “Lying on the Road” and “It turned out…” were published. The Republican Korean Drama Theater staged several of his plays, translated. He translated the plays “In the Name of Revolution” by A.Shatrov, “The Blue Handkerchief” by V.Katayev, “Beu, Kyzdyr Ay” by K.Bayseitova and K.Shangytbayev, selected poems by A.Tvardovskiy, Zhambyl, and other autors into Korean.

Kim, Victor was born on September 17, 1929 in Vladivostok, Russia. Victor’s real surname is Li. When his father was repressed in 1933, it was changed to his mother’s name. After school, he entered the Law Faculty of Kazakh State University to graduate in 1959. Lawyer. He began to write in 1984. His book “The Life of a Man Who Left Chunchoido” first appeared in 1993. He is also the author of the novelette “After Victory” and the novel “White Chrysanthemums”.

Han De En (1931–1993) was born on August 17 in Pyongyang. In 1958, he graduated from the Script Writing Department of All-Union State Cinema Institute. He worked as an editor at the Kazakh Television Studio, a copyreader at the Lenin Kichi interrepublican newspaper, the Head of the Department for Literature at the Republican Korean Theater, and the Literary Council for Korean Literature in the Writers’ Union of Kazakhstan. His first short story, titled “The Starling”, appeared in 1961. His first play, written in 1963, was staged by the Republican Korean Theater. Later, his plays “The Life of a Contract Soldier”, “The Legend of Yanbay”, “Kim Sen Dar”, “The Gray Hair of Mother”, “The Living Buddha”, “The Hair’s Adventure”, and “You to Me and Me to You” were published.

Han De En translated plays by M.Moliere, W.Sakespeare, Sh.Aytmatov, and M.Karim into Korean. He was awarded the Prize of the Writers’ Union of Kazakhstan.

Yan Won Sik (1932–2005) was born on May 19 in Andyu, the Republic of North Korea. In 1953, he was sent to Moscow by DPRK. Having graduated from All-Union State Cinema Institute in 1958, he did not return to his homeland but stayed in the Soviet Union as a political emigrant.  In 1987, he graduated from the Faculty for Journalism, Kazakh State University. In 1958-1960, he worked as a film director and camera operator for Volgograd Television. In 1960-1984, he worked as a film director and camera operator for the Kazakhfilm Stuido; in 1984–1993, he was the Head of the Department for Korean Literature and Art at the republican Korean newspaper Lenin Kichi, in 1993–2000, he worked as a deputy chief editor, later a council for the Korey Ilbo newspaper. Yan Won Sik became a member of the Cinema Workers’ Union of the USSR in 1979. In 1996, he became a Candidate of Philosophy.He translated “The Instruction” by Abay and the book by N.Nazarbayev “When Centuries Meet” into Korean.

Son, Lavrentiy was born on February 2, 1941 in Karatal District, Almaty Region. He left secondary school in 1958, in Nukus (Karakalpakstan), and then graduated from A.S.Popov Radio Engineering College in Yekaterinburg (Russia) and All-Union State Cinema Institute (1963). He started his career at a radio-engineering factory in Barnaul and continued to work at the Mathematical Institute of the Academy of Sciences of the Kazakh SSR. In 1967, he began to work as a scriptwriter and film director at the Kazakhfilm Studio. He wrote screenplays for nine films, such as A Special Day, Family Album, The Choice, Salt, and Serikkul’s Days and Hours.

As for theater, he is the author of the plays “Spring Wind”, “Birthday”, “Consciousness”, “Choking with Anger”, “Country Idiot Wedding”, “The Man Who Came from Ushtobe”, etc. In 1989, he acted as an art director for the film You and Me arranged by writers, scientists, and cinema scholars; shot several documentaries about small post-Soviet ethnic communities (CIS) as a scriptwriter and a director. The studio, which had been reordered to the Song Cinema Private Cinema Company, was awarded many prizes at international ethnographic documentary festivals in 1999. In 2001, he was awarded the title of a Merited Artist of the RK.

The President’s speech at the opening ceremony for awarding the State Grant to literary and cultural workers contained the following words, “Nowadays, the Russian reader of Kazakhstan has a vague idea of authors who write in Kazakh. It might be reasonable to consider developing the translation sphere. The people of Kazakhstan should take pride in their national writers. I have already raised the issue of interregional cultural exchange. From now on, interregional Days of Culture should be held on a regular basis. The Kazakhstani patriotism expressed in literature and arts should be implemented in important historical events. Any work of art, whether it is a film or musical work, an animated film or a drama piece, regardless of the genre, should promote the idea of unity, patriotism, and prosperity. It is our primary mission. Over the years of Independence, our country has achieved a lot, and its achievements are based on the unity and concord of all Kazakhstani citizens. We should bear it in our mind.” According to the Head of State, works by Korean writers are an evidence of a well-developed translation sphere.

The future of our country is our future. The Head of our State, N.Nazarbayev, said, “Once, people of many nationalities were destined to come to the Kazakh land. Today, they are one and equal regardless of their origin; they share one dream in spite of the different blood in their veins.  People who want to unite under the colors of one country and glorify it have one life. Thus, the future of our country is based on three words, which are like a pot trivet – “one nation, one country, one life.” May our age-old friendship last forever!