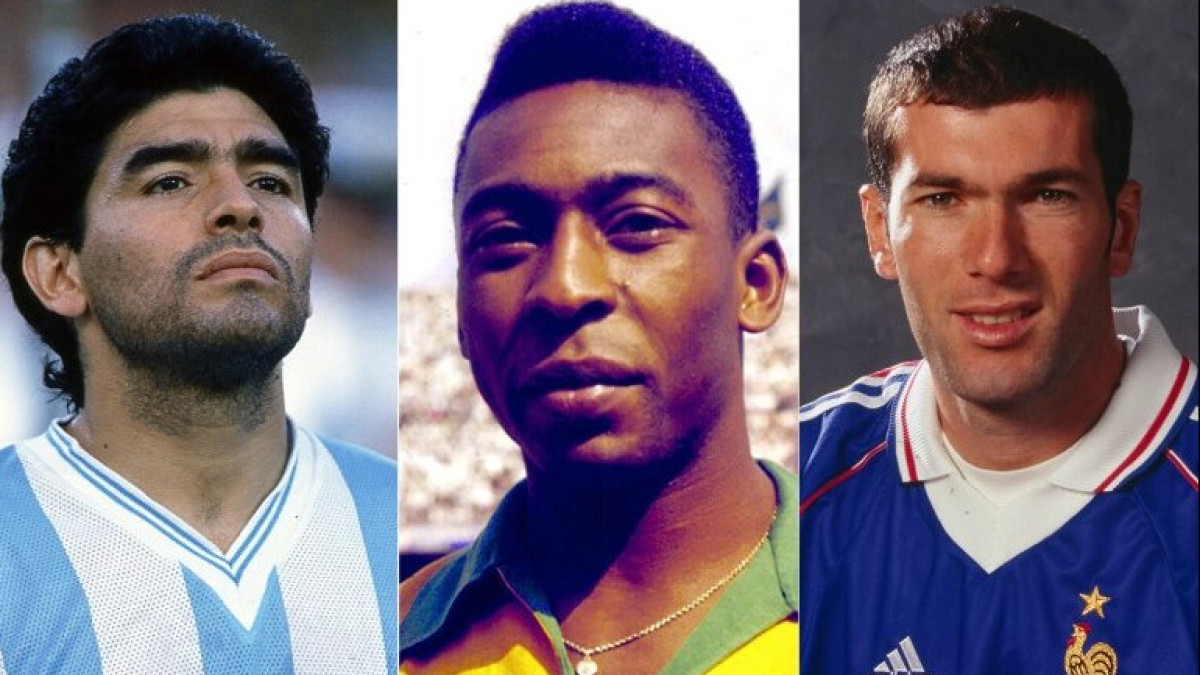 On the eve of the 2022 FIFA World Cup in Qatar, The Aljazeera Agency has published the Top h10 largest players who played at the World Cup.

One of the greatest, and most controversial, players of the game, Zidane won the 1998 World Cup for France at home, scoring twice in the final.

Injuries kept him largely out of France’s short-lived 2002 World Cup campaign, but he went on to be named player of the tournament at the 2006 edition – despite the infamous head butt that sent him off in the final. Thousands of fans lined the streets of Paris chanting Zidane’s name when the team returned home.

Having scored 31 goals in 108 matches for France, his talismanic leadership shaped the national team into something much greater than the sum of its parts.

As a coach, he went on to win three Champions League titles and La Liga twice with Real Madrid.

Not even the great Bobby Moore – whose statue greets supporters arriving at Wembley Stadium – was as loved by the everyday English fans as Jimmy Greaves.

Already a star at home, Greaves gained international recognition after rescuing a pitch-invading dog that had evaded the Brazilian greats during England’s 1962 World Cup quarter-final. Brazil’s Garrincha took the dog home and Greaves became known in Brazil as “Garrincha’s dog-catcher”.

Greaves was part of the 1966 World Cup-winning squad, but a savage injury inflicted by France’s Joseph Bonnel that required 14 stitches kept Greaves out of the final.

Greaves scored six hat-tricks in an England shirt, a record that still stands.

The 1966 campaign continues to be a focal point of English identity, the squad universally adored, and Greaves became a broadcaster, welcomed into the nation’s living rooms for decades.

Puskas was captain of the Mighty Magyars, Hungary’s golden team, which flourished under the influence of Jimmy Hogan’s Total Football.

He scored 84 goals in 85 matches for Hungary and made four appearances for Spain. Hungary were so dominant under Puskas that the 1954 World Cup final was the only game they lost in the entire decade.

He scored 702 goals from 705 career games. The giant of European football was a vocal supporter of the 1956 Hungarian Revolution and defected to Spain while on tour after the Soviet Army killed 2,500 of his countrymen while crushing the uprising.

The only German to be named FIFA World Player of the Year, Matthaus holds the record for most World Cup games (25). His natural leadership gave him a commanding presence on the field, and his technical ability combined with his tactical awareness gave him an unstoppable dominance on the pitch.

The bullish Diego Maradona called him the toughest opponent he had ever faced.

It’s rare that you get prizes just for being a good guy, but Germany’s record goal scorer, the somersaulting Miroslav Klose, has a handful of them. With a career hallmarked by fair play and decency – he famously refused to accept a penalty awarded to him during a club match because he knew the referee was mistaken – Klose scored in four world cups, finally lifting the trophy in 2014.

A physical powerhouse of a forward, his stature belied his speed. He scored 71 goals in 137 matches in a German shirt. He also scored 16 World Cup goals. No one has ever scored more. He was prolific, and a good guy.

“The Phenomenon” reinvented the role of striker while playing for Brazil in 98 matches and scoring 62 goals. He lifted the 1994 World Cup trophy at the age of just 17.

Four years later, he was named Player of the Tournament after steering Brazil into the final, only to suffer a convulsive fit just hours before the game. He scored twice in the 2002 World Cup final to add to his six in the competition earlier, once more lifting the trophy.

But it was the way in which he did it that set the world on fire: Speed, control, vision, total mastery of the ball, explosive runs, juggling the ball past defenders with acrobatic flicks and tricks and the goals.

No compilation of World Cup heroes could omit Franz Beckenbauer, one of only three men – along with Didier Deschamps and Mario Zagallo – to lift the World Cup trophy both as a player and a manager. Despite playing as a defender, Beckenhauer scored 14 goals in his 103 appearances for West Germany, captaining the 1974 winning side.

After playing in the 1966 World Cup final loss to England, he got revenge four years later, scoring a searing goal to knock the English out and send West Germany to the semi-final.

But three World Cup appearances weren’t enough for him, and as Germany marched towards reunification and a new era, Beckenbauer guided the national team as manager to win the 1990 World Cup. In later years, he led Germany’s successful bid to host the 2006 World Cup, a campaign that was later investigated by FIFA over alleged corruption.

The three-time Ballon d’Or winner, one of the most influential figures in the sporting philosophy of Total Football, brought a new level of sophistication to the game.

Football for Cruyff wasn’t just an athletic sport, but a blending of mind, body and artistry – an exercise in simplicity and beauty.

A creative playmaker with a unique understanding of the geometry of players’ pitch positions, he led his team like the conductor of an orchestra. The Netherlands never lost a game in which he scored. And he scored a lot – 33 goals in 48 international matches.

Cruyff led the Netherlands to the final of the 1974 World Cup, scoring twice against Argentina and knocking out then-champions Brazil. It was only the defensive heroics of Franz Beckenbauer that frustrated Cruyff’s efforts on goal and kept the Dutchman from lifting the trophy.

Cruyff didn’t play in the 1978 tournament after a kidnapping attempt led him to reassess his priorities on football’s global stage. But his was a revolutionary legacy, not only at Ajax and Barcelona, where he both played and managed, but also for the Dutch national team and for the future of the game itself. Total Football, “tiki-taka”, the Cruyff turn – all speak to his mastery of the way football should be played.

The drug-addled “Golden Boy” is widely regarded as one of the greatest players in the history of football. His 60-metre dribble past five England players in the 1986 World Cup quarter-final led to the “goal of the century”, yet its mastery followed the sport’s most famous unpenalised handball – the goal that became known as “the hand of God”.

That game epitomised the two sides of Maradona: the raw, prodigious talent of the Argentinian captain, mixed with an absolute disregard for rules, the shameless arrogance of a genius born in the slums, the belief that one’s innate talent sets you apart from – and above – the mere mortals around you.

Argentina went on to win the 1986 World Cup, 10 years after Maradona had made his first appearance for the national side aged just 16. He earned 91 caps and scored 34 goals for his country, but no one can know in how much more glory he could have basked were it not for his 1991 arrest for cocaine possession as his off-field life started to spiral. He played in four World Cup tournaments but did not finish the 1994 tournament after testing positive for ephedrine, a banned substance.

Has there ever been a more successful football icon than Brazil’s Pele?

In 1958, when he scored his first World Cup goal – the result of a scuffed mishit that ended Wales’s World Cup dreams for the following seven decades – could anyone have known the giant he was to become?

With either foot, Pele could produce the sort of magic that inspired generations. Off the pitch, as one of the first truly global Black sports superstars, his outspoken support for improving the lives of the poor made him a national hero.

Pele lifted the World Cup three times: 1958, 1962 and 1970. He remains Brazil’s leading goal scorer with 77 goals in 92 games. He was so famous, so beloved all around the world that in 1969, both sides in Nigeria’s brutal civil war agreed to a ceasefire so they could watch Pele play in an exhibition match in Lagos.

A prolific goal scorer, he could play from any position on the field with vision and flair. He was never selfish, linking with other team players to produce generous assists. His charismatic leadership on and off the pitch led to a legacy lauded by figures as diverse as Nelson Mandela and Henry Kissinger.

Subscribe to our Telegram channel and be the first to know the news!
Next news
TikTok celebrity from Lebanon delights Kazakhstanis by cooking beshbarmak
Photo day
Kazakhstan wins bullet shooting competition in Indonesia