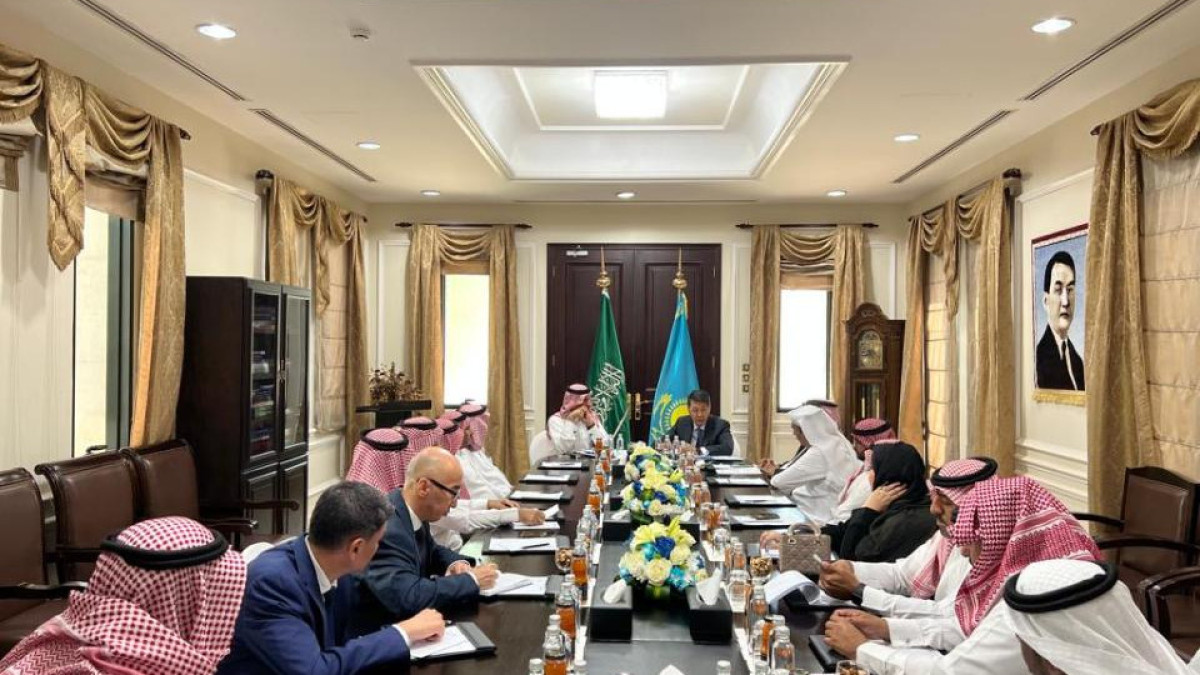 The Embassy of Kazakhstan to Saudi Arabia, in cooperation with the Center of Information and Arabian-Russian Studies (CIARS) and the Center for Research and Intercommunication Knowledge (CRIK), hosted the round table entitled “Kazakhstan after the 2022 presidential election”, El.kz cites MFA.

The round table was attended by Majed Al-Turki, the Chairman of CIARS, scientists and leading experts of CRIK, Imam Mohammad Ibn Saud Islamic University, CIARS, and other Saudi research centers.

Ambassador Berik Aryn has briefed on the election campaign in Kazakhstan and the results of the early presidential election, where a convincing victory was won by Kassym-Jomart Tokayev, who gained more than 81.31% of the vote. At the same time, he noted that according to international observers, the elections were held as transparently as possible following the requirements and norms of international law and the legislation of Kazakhstan.

The Kazakh diplomat paid particular attention to the fact that the elections demonstrated the will of the people of Kazakhstan and broad popular support for the political course of President Tokayev.

In his speech, Aryn also briefed on the key directions of the course of President Tokayev on building a “Just and Fair Kazakhstan” and the democratization of society, as well as on the main aspects of the implementation of complex socio-political transformations and constitutional amendments, which were adopted at the nationwide republican referendum in June, 2022.

In his turn, the Chairman of CIAR Majed Al-Turki, congratulated President Tokayev and the people of Kazakhstan on the successful holding of elections. He noted the importance of strengthening Kazakh-Saudi cooperation in various fields, including trade and economic, cultural, humanitarian, and investment spheres.

He also mentioned that in many aspects, Kazakhstan holds a leading position in Central Asia, which is mainly due to the country's leadership's far-sighted, open and pragmatic policy. Today, against geopolitical turmoil in the world arena, Kazakhstan, maintaining stability and harmony in society, is entering a new phase of its development by transforming political and public life.

In his speech, the expert of CRIK, Amin Suleiman Al Sido, noted that Kazakhstan today plays an important strategic, trade, and economic role not only in the region but also in the entire Asian continent. In the short historical period of its independence, Kazakhstan has achieved impressive results and taken its rightful place in the world community. The country's balanced and multi-vector foreign policy course has allowed Kazakhstanis to build good neighborly relations with all regional countries and significantly contribute to maintaining stability in Central Asia.

Kazakhstan's constitutional reforms and political transformations have aroused great interest among the Saudi expert community. Saudi experts and media representatives were given comprehensive answers to questions regarding the process of building a balance between the institutions of power, including the transition from a super-presidential form of government to the classical model of a presidential republic with a “strong parliament and an accountable government,” the electoral system, the democratization of the country's party system, etc.

The participants of the round table highly appreciated the political and social reforms implemented in Kazakhstan, the organization of presidential elections, and the initiatives of the President, including the adoption of 6 constitutional laws in the socio-political and civil law spheres, and also expressed confidence in the successful implementation of all tasks.

Within the framework of the round table, the experts also discussed the results of the official visit of President Kassym-Jomart Tokayev to Saudi Arabia, which took place in July this year. In the context of the development of Kazakh-Saudi relations, they noted that President Tokayev's re-election would positively impact bilateral relations and the implementation of agreements reached at the highest level. According to experts, today, thanks to mutual support and strong political will of the leaders of both countries, friendly and trusting relations are progressively developing between Riyadh and Astana.

Participants paid particular attention to the development of cultural and humanitarian cooperation and tourism. They noted that this year, the tourist flow between Kazakhstan and Saudi Arabia had increased significantly due to the opening of direct flights.

In general, the participants of the round table highly appreciated the historical role of the President Tokayev in the further development of Kazakhstan, strengthening its authority among the world community, as well as restarting the political life of the country. The guests congratulated the Head of Kazakhstan on his re-election for a new term and wished him success in his multifaceted state activities to benefit the prosperity and well-being of the people of Kazakhstan.

The round table participants also shared their views and made several specific proposals to intensify bilateral Kazakh-Saudi cooperation.

Subscribe to our Telegram channel and be the first to know the news!
Next news
Ministry of Energy to limit export of certain petroleum products outside EAEU
Photo day
Number of tourists increased in Kazakhstan