Political and socio-economic reforms in Kazakhstan presented in Vienna 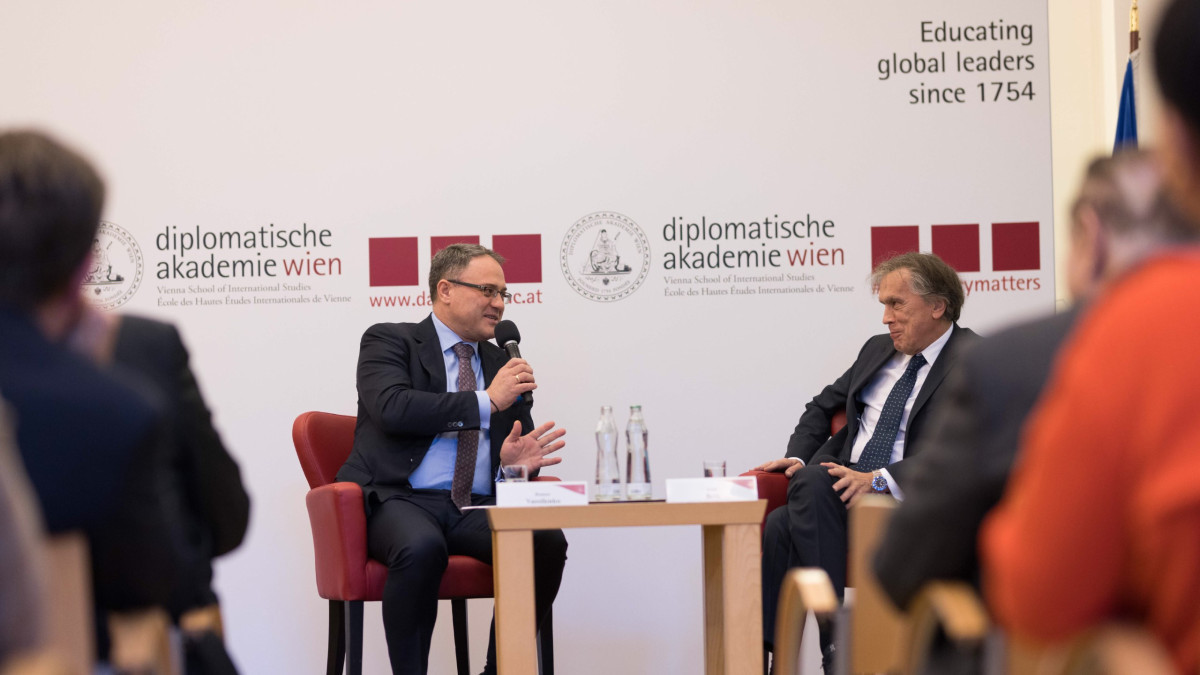 On December 7, the Diplomatic Academy of Vienna hosted an international conference on the theme “Central Asia: the age of reform” with the participation of the Deputy Minister of Foreign Affairs of Kazakhstan, Roman Vassilenko, Secretary General of the Austrian Foreign Ministry, Peter Launsky-Tieffenthal, representatives of state bodies and leading think tanks in Europe and the USA, El.kz cites MFA.

Director of the Diplomatic Academy of Vienna, Emil Brix, opening the event, emphasized the importance of the event in the face of international turbulence and increased interest in the Central Asian region.

In turn, Mr. Launsky-Tieffenthal noted the course of reforms being implemented in Kazakhstan under President Kassym-Jomart Tokayev, expressing the hope that the ambitious reform program in Kazakhstan will serve as an example for the region as a whole. The Austrian diplomat also stressed that his country supports the EU policy aimed at assisting the Central Asian states in the implementation of reforms and the process of regional integration.

The Secretary General of the Austrian Foreign Ministry also announced the growing interest in Central Asia from the European Union. In this context, he mentioned the recent visits of the EU leadership to the Republic of Kazakhstan, the CA-EU summit in Astana, the ministerial meeting, and the conference on interconnectivity in Samarkand in the EU-CA format, and also noted that the topic of Central Asia was one of the most important at the meeting of the Foreign Ministers of the G7 countries in November this year.

During the discussion, Mr. Vassilenko thoroughly acquainted the participants of the conference with the political and socio-economic reforms in our country through the concept of “Just and Fair Kazakhstan”. Furthermore, the Kazakh diplomat emphasized the country's commitment to a multi-vector, balanced and pragmatic foreign policy, in which the Central Asian region is one of the most critical priorities.

Within the framework of the event, the Director of Central Asia and Caucasus Institute at the American Foreign Policy Council, Svante Cornell, and a Senior Research Fellow of the Center for International Relations and Sustainable Development (CIRSD), Stefan Antić, made the presentations of their reports. Mr. Cornell's report was focused on the ongoing social reforms in Kazakhstan and the geopolitical context of these reforms, while Mr. Antic's analysis was on the topic “How reforms facilitate Central Asia’s rise to international prominence”.

The experts elaborated on the stages, goals, and objectives of the reforms being carried out in the countries of Central Asia, in particular, Kazakhstan and Uzbekistan. There was also a discussion regarding the influence of internal and external factors on the region. It is noted that an essential stage of transformation is taking place in these states, and the population's standard of living and the region's degree of involvement in international processes will depend on the success of the reforms.

Among the speakers of the event were also Yulian Chifu, Foreign Policy, Security, and Strategic Affairs Advisor to the Prime Minister of Romania; Christine Muttonen, a former member of the Austrian Parliament, ex-President of the OSCE Parliamentary Assembly and Special Representative for Central and East Asia, Vuk Jeremić, President of the Center for International Relations and Sustainable Development (CIRSD), Velina Tchakarova, Director of the Austrian Institute European Policy and Security Policy (AIES) and Aidar Kurmashev, Head of International Studies Department at Kazakhstan Institute for Strategic Studies (KISS) under the President of the Republic of Kazakhstan.

Giving an upbeat assessment of the “strong President - influential Parliament - accountable Government” model being implemented in Kazakhstan, the speakers of the panel session were unanimous in their opinion that it is necessary to build and strengthen the balance of power institutions.

According to the general opinion of the conference participants, the European audience had an excellent opportunity to get acquainted with the reform processes in the countries of Central Asia, as well as with the region's growing role in the context of global shocks.

Subscribe to our Telegram channel and be the first to know the news!
Next news
Kazakhstan's trade turnover with EAEU countries amounted to $ 23 billion - Tokayev
Photo day
2nd Kazakhstan rescue team arrives in Türkiye