About life and traditions of Polish people in Pavlodar 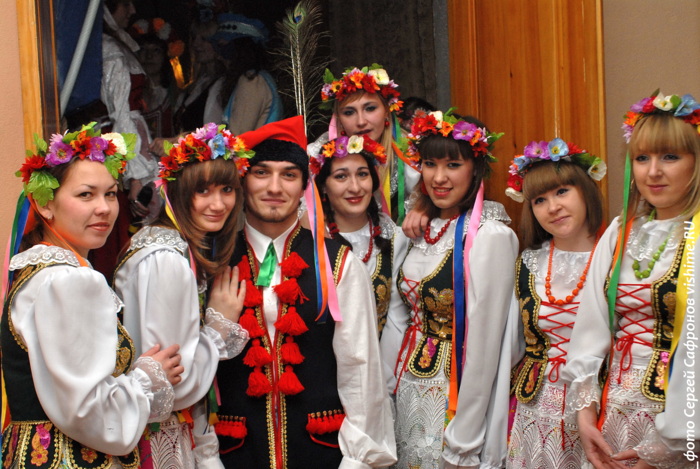 Pavlodar Regional Society of Poles "Polonia" was established in 1996. The first chairman of "Polonia" was Voronina Yulia Romanovna. From 1998 to the present day the chairman of the Polish centre is Vitaliy Zifridovich Swintsitsky.

The main goals and objectives of the Polish Centre are cultural and educational work, revival and preservation of language, customs, traditions and culture, establishing ties with its historical homeland. During the existence of the society many useful things have been done. Polonia is fully developing within the Assembly of People of Kazakhstan of Pavlodar region. Pavlodar Poles take an active part in social and political life of the Pavlodar region, among them there are well-known journalists, doctors, scientists and businessmen. Much is being done to preserve the national traditions and culture of the Poles in Kazakhstan. Religious holidays like Easter and Christmas are marked with great joy in "Polonia". It is on these holidays that you can learn in detail about the national Polish traditions and customs, hear beautiful Polish speech from not only the older generation, but also young people, watch small performances in Polish on religious topics, try Polish national cuisine and just feel the spirit of politeness. The Polish Association "Polonia" takes the most active part in all events connected with significant state dates of the Republic of Kazakhstan, holidays held by the authorities of Pavlodar, Assembly of People of Kazakhstan of Pavlodar region. "Polonia" maintains relations with other national and cultural centres of the city of Pavlodar and participates in various festivals and youth meetings. A huge role in the formation of young people in the Polish ethnos of Pavlodar plays the Polish branch of the School of National Revival. For almost fourteen years, students of the Polish branch of the School of National Renaissance have been studying in higher educational institutions of the Republic of Poland. In addition, the youth of Pavlodar "Polonia" are also studying in educational institutions of Kazakhstan. Every summer children of the Polish branch and children of non-Polish origin studying at the School of National Revival rest in summer camps in Poland together with children living in Poland. In addition, the youth wing of the Polish association has the opportunity, thanks to the Embassy of the Republic of Poland, to rest in the recreation area Bayanaul and Borovoe. For seven years now, the young people of the Polish centre have been travelling to the competition for readers of Polish poetry by Polish authors. Young readers from many countries take part in this competition. The representatives of Kazakhstan, for the last seven years, have been representatives of the Polish diaspora in the city of Pavlodar. Every year the guys achieve success, taking first, second or third place. 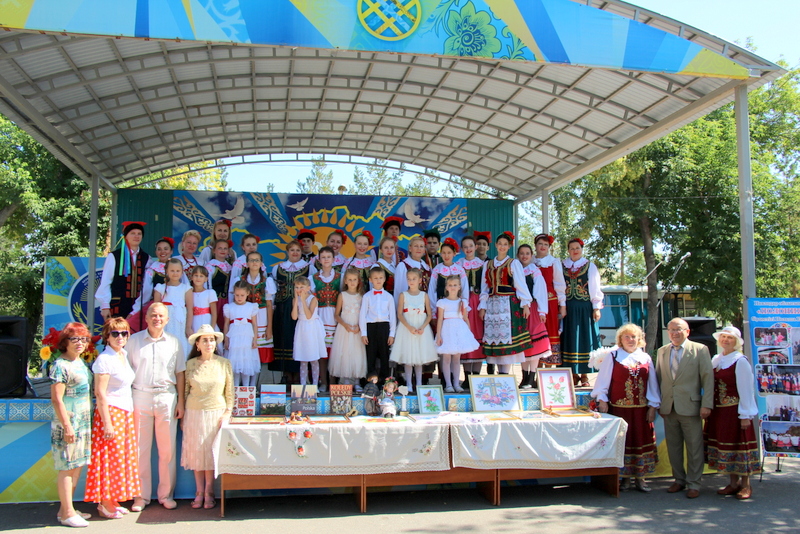 "Polonia" conducts great work on assistance, development and perfection of interethnic relations on principles of equality of the people. Pavlodar Poles take an active part in the socio-economic, social and political life of the region. Among them there are well-known doctors, scientists, businessmen. "Polonia" actively promotes folk art during various events. One such outstanding event is the Days of Polish Culture, which aims at restoring the continuity of cultural and spiritual traditions, educating young people about love and respect for the history of the people, learning and promoting the language, culture, customs and traditions of the Polish people.

For Poles in Kazakhstan that year was marked by another date, the 80th anniversary of the deportation of Poles to Kazakhstan. In 1936-1939, about 190 thousand ethnic Poles were deported to Kazakhstan. The exiled Poles suffered many misfortunes and hardships. Documents confirming that the local population met the expellees very kindly have been preserved, and this has led to the fact that the destinies of many Poles in Kazakhstan, their dreams and plans are connected with this land. In speech, Vitaly Zifridovich Svintsitsky, Chairman of the Union of Poles of Kazakhstan, noted that Poles remember the goodwill of Kazakhs and remember those who gave them a helping hand, heated in his yurt, shared bread. He also shared that on August 23, 2016 the First President N.A. Nazarbayev took part in the Kazakh-Polish business forum in the Republic of Poland. Addressing the audience, the Head of State stressed that Kazakhstan considers Poland as a reliable political and economic partner in the European Union. It is pleasant that on the eve of visit of our president the female vocal group "Syreny" of public association "Polonia" has visited with creative trip on the historical Native land, under the invitation of the management of Polish city Luban. The participants of the group studied the Polish language, visited historical monuments and sights. And, of course, our artists prepared a large concert program as a gift to the residents of the city, a fragment of which was offered to the guests of the festival. The organizers offered a rich concert program for the guests of the festival. There were performances of youth vocal and choreographic group "Nartsiz", children's vocal group "Yagudki", women's vocal group "Syreny".

Poles have always been famous for their beautiful dances: polonaise, krakowiak, amulet, kuyaviak. Choreographic ensembles in their performances managed to show not only the skill of performance, grace and plasticity, but also the beauty of costumes.

"Polonia" showed that she is rich in talents. It has already become a good tradition of "Polonia" to surprise spectators with mass music and choreography compositions. In the repertoire of creative collectives of ethnocultural associations there are folk ritual songs in modern arrangement, one of them, wedding song "Siadaj nie gadaj" was performed by participants of youth ensemble "Nartsyz". Among the ethnocultural talents with confidence can be attributed to the soloist of the ensemble "Syreny" Elena Kritskaya, who was able to conquer with her voice even a sophisticated Polish audience. Everything was repeated this time too. For a long time the stormy applause after the song in Polish - "I see your image" performed by the singer did not stop.

As the chairman of the Polish ethnocultural association of Pavlodar notes, the most important factor of interethnic harmony at one time was that people began to be put next to each other in different national costumes. In the Soviet time they also did it, but then, as a rule, not all ethnic minorities showed it: people of more than 100 nationalities live in the country, and on photos and posters only representatives of 15 union republics in the costumes of 15 peoples were shown - other ethnoses were deprived of this possibility. When they showed a picture of people of different nationalities standing next to each other in a quiet "Kazakh way", including those who once conflicted with each other, there appeared a serious basis of stability and harmony in society.

However, now we need to promote the ideas of the Assembly of People of Kazakhstan more widely. Our organization still has a lot of unrealized. Why we, for example, do not work with educational institutions and do not show to pupils culture of ethnic minorities living in region and country? We in fact were not going to go on an American way. Another very important thing that the Assembly gave people was the opportunity to have a free faith. It was through the Assembly of People of Kazakhstan that many people were able to meet the need for faith and its expression, because the state began to talk about the diversity of the confessions represented in its society. Nursultan Nazarbayev noticed that confessions globally reconcile people living on the planet. I think it was also one of the achievements of the Assembly. Yes, as long as there is a debate about whether or not to teach the basics of religion at school. But it's just a matter of time.

And another, no less important achievement of the Assembly of People of Kazakhstan, we have been given the opportunity to communicate with our historic homelands: both representative (we go there with concerts and to participate in various forums), and technically (we cooperate with different countries through embassies), and organizationally (we keep in touch through the Internet with other countries, exchange experiences). In Soviet times it was not possible to go there as a tourist, but not more. I remember the story that the late Kanat Bolatovich Darzhuman, former Deputy Chairman of the Regional Assembly of the People of Kazakhstan, told me. One day he went to France on the Komsomol route, and he really wanted to see how the French live, why they are so praised. But it was impossible to go somewhere or to break away from the group because they were accompanied by a representative of the State Security Committee” Chairman of Polish association said.

The vocal and choreographic ensemble "Nartsyz" and the female vocal group "Syreny" of the Polish ethnocultural association "Polonia" have existed since 2000. The repertoire of the bands includes ethnic Polish songs, folk-rock and modern variety. They often perform together, using elements of theatricality, choreography, live sound of musical instruments: flutes, guitars. Some compositions such as "U boru", "Guralskaya suite", "Chervone yablushko" are performed together. The collectives participate in all events, ethno-festivals and concert programs of Pavlodar House of Friendship, as well as events of city and regional level, charity programs, tour around Kazakhstan. They actively participate in the life of the Polish ethnocultural association "Polonia".

Subscribe to our Telegram channel and be the first to know the news!
Next news
Preserving Traditions Through Generations
Photo day
Kazakhstan wins gold of World Cup on bullet shooting