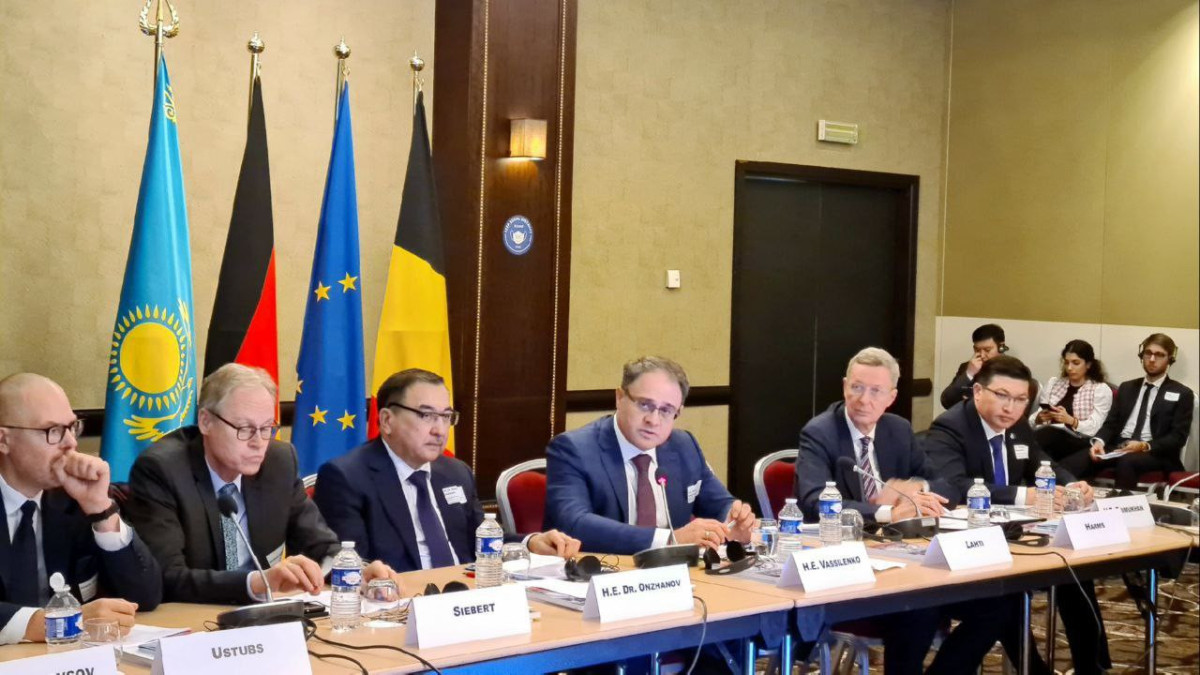 arious aspects of cooperation of Kazakhstan and the European Union in the transport and logistics sector, as well as of social modernization in Kazakhstan were discussed by the participants of the 35th meeting of the Berlin Eurasian Club (BEC) held in the EU capital, El.kz cites MFA.

The event was organized by the Eastern Committee of German Economy and the embassies of Kazakhstan in the Federal Republic of Germany and the Kingdom of Belgium.

The meeting was arranged in the format of two sessions dedicated to the topics of Global Gateway: Opportunities for Joint Projects in New Realities and of Social Reforms Agenda in Kazakhstan: View from Europe.

Underlining at the opening session the role of the BEC as an important expert platform for discussing specific issues of diverse cooperation between Kazakhstan and the EU, the Kazakh Deputy Minister of Foreign Affairs Roman Vassilenko, informed the participants of the session about the course of comprehensive political modernization initiated by President Kassym-Jomart Tokayev in his country and aimed at transforming the entire model of public policy, expanding the participation of citizens in political processes and strengthening human rights protection mechanisms. In addition, he stressed Astana’s interest in developing additional routes for transporting commodities between Europe and Asia, including the so-called Middle Corridor. “We see a reciprocal serious interest on the part of our European partners to strengthen mutually beneficial ties and we count on productive joint work to achieve our common goals,” the Kazakh diplomat said.

Kazakhstan’s Ambassador to Germany Nurlan Onzhanov emphasized that during the 10 years of its functioning, the BEC has proven its effectiveness as a platform for informal dialogue with the participation of government agencies, business and experts from Kazakhstan, Germany, and other European countries. According to him, given the high dynamics of trade and economic turnover with European partners, Kazakhstan is interested in the successful implementation of projects under the EU’s Global Gateway program, which would help strengthen the transport and logistics capacity of all stakeholders and provide mutually beneficial outcomes on a win-win principle.

Peteris Ustubs, Director for Middle East, Central Asia, Asia and Pacific in the European Commission’s Directorate-General for International Partnerships, noted the high level of interconnectedness between various aspects of economic development, environmental protection, digitalization, and social policy, including through continued investment and innovation in the sectors of healthcare and education. In this context, the EU is ready to continue comprehensive cooperation with Central Asian countries, including Kazakhstan, on issues of mutual interest.

Michael Siebert, Managing Director for Russia, Eastern Partnership, Central Asia, Regional Cooperation and OSCE of the European External Action Service, noted the importance of further effective implementation of the Enhanced Partnership and Cooperation Agreement between Kazakhstan and the EU. Underlining the European Union’s support for the reforms in Kazakhstan, he noted the positive dynamics of political contacts and interaction on implementation of specific projects aimed at development of relations in transport, logistic and other areas between Kazakhstan and the EU.

The session’s participants discussed prospects of implementation of the EU Global Gateway initiative on development of transport and logistics infrastructure in Central Eurasia aimed at increasing trade turnover between Kazakhstan, Central Asian countries and China and the EU countries.

Kazakhstan’s Vice-Minister of Industry and Infrastructural Development Almaz Idrisov informed the participants of the meeting of the strategy for the implementation of the transit potential of his country and the development of the trade cooperation infrastructure with international partners, including in the European direction.

Deputy Chairman of the Board of JSC Kazakhstan Temir Zholy national railways company Anuar Akhmetzhanov highlighted the processes of development of the country’s railway transportation industry and promising directions for increasing cooperation with the EU in this area.

At the panel session entitled Social Reforms Agenda in Kazakhstan: View from Europe, experts from Western and Northern Europe exchanged views on the progress made and challenges to meet in implementing public policy to ensure the social welfare of Kazakh citizens.

The President of the Kazakh-German Society, the former Director of the Konrad Adenauer Fund in Kazakhstan Thomas Helm noted that the experience accumulated in Germany and other EU countries in implementing the standards of social development could be very useful for Astana.

The keynote speaker at the session was Director of the Institute for Security and Development Policy (Stockholm) Svante Cornell, who recently issued a report on social reforms in Kazakhstan. In his speech, he focused on the implementation of a number of successful programs in the social sphere during the years of Kazakhstan’s independence and the progress made in education and health care, noting, at the same time, the need to ensure its more even distribution throughout the country, including in rural areas. At the same time, according to him, the change of generations means a fundamental change in the perception of the interaction between state and society, which should be considered when further developing and implementing new packages of social, political, and economic reforms in Kazakhstan.

The Friedrich Ebert Foundation’s Regional Director for Kazakhstan and Uzbekistan Christoph Mohr stressed that the country’s comprehensive transformation opens up new opportunities for supporting and strengthening the partnership between Kazakhstan and the EU in various spheres. In his view, the recent constitutional referendum and the upcoming presidential elections represent important first steps in building a Just Kazakhstan, and the dialogue between state and society, encouraged by President Tokayev, is laying a solid foundation for further transformations. Obstacles on this way, of course, are and will be, but they are surmountable, believes the German expert.

In their turn, the experts from the Netherlands, Norway, France, who took part in the discussion, highlighted various aspects of social reforms in Kazakhstan, the perception of this process in the Kazakh society and in the international community, the unprecedented complexity of the geopolitical context for their implementation. Among the topics discussed were modernization of the energy sector and transition to a green economy and the impact of these processes on the social sphere, problems of single-industry mono-towns, promotion of employment, gender equality, etc.

In general, the discussion showed a significant constructive interest in social reforms in Kazakhstan among European experts, who agreed on the importance of mutually useful exchange of experience in this area, significant both for improving living standards of the citizens, and for a better understanding in the international community of the transformation processes in Kazakhstan, further rapprochement between Kazakhstan and EU countries. The participants noted the need to continue such discussions, as well as of elaborating and implementing joint research projects to study the Kazakh experience of reforms.

The event was attended by more than 70 participants from among representatives of public authorities of the EU member states and the EU structures, businesses, international organizations, and the expert community.

Subscribe to our Telegram channel and be the first to know the news!
Next news
Tokayev congratulates Kazakhstanis on Rescuers’ Day
Photo day
2nd Kazakhstan rescue team arrives in Türkiye