In 1945, speaking at the Alma-Ata Opera House at the celebration of the 100th anniversary of Abay, Mukhtar Auezov spoke about the importance of celebrating anniversaries: it raises the people's spirit, unites them and does not interrupt the ties between generations. Tracing the line of life of the worthy sons of the Kazakh land, we have the opportunity to peer into the common past, to see much of what was not noticed before. For there are the fates of people who add vigilance to the people, and dignity to their descendants. The fate of Mukhtar Auezov himself was one of those, inseparable from the fate of the people. On the day of the 125th anniversary of Mukhtar Auezov, we recall the life path of the Kazakh writer, playwright, scientist, author of the four-volume novel "The Way of Abai", included in the "Library of World Literature". 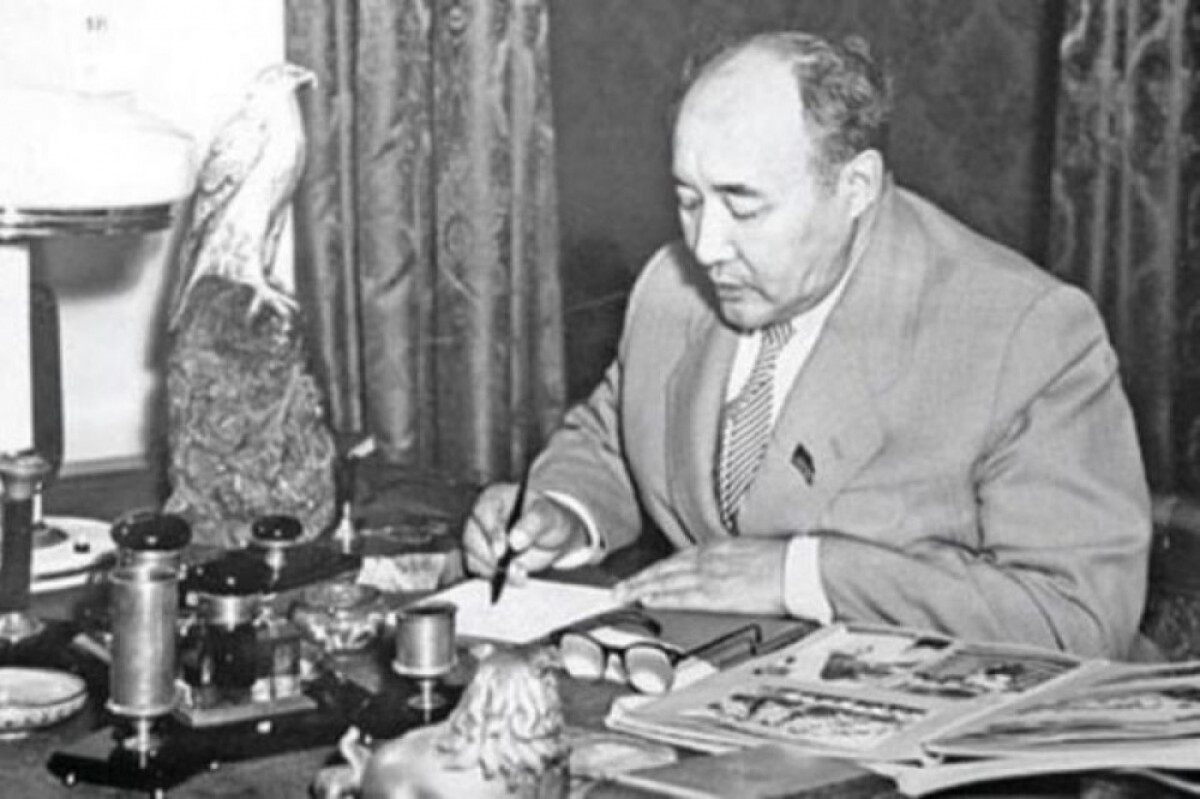 Mukhtar Auezov was born on September 16 (September 28), 1897 in the Chingiz volost of the Semey district (now the Semipalatinsk region). The Auezov family was related to the family of the Kazakh poet Abai Kunanbaev, Mukhtar's grandfather Auez was a friend and admirer of Abai's work. Abay's father Kunanbay was married to Nurganym, the sister of Auez. Abay came to Auez to celebrate the birth of his grandson Mukhtar.

Mukhtar Auezov lost his parents early: father Omarkhan died in 1900, mother Nurzhamal - in 1912. Little Mukhtar is brought up by his uncle Kasymbek, who in 1907, after a year of study in a madrasah, placed the boy in a 5-class city Russian school in Semipalatinsk on a zemstvo scholarship from Chingiz parish. In the 1912-1913 academic year, Mukhtar graduated with honors from the first class of the teacher's seminary, and completed his studies at the Semipalatinsk teacher's seminary in 1919.

Young Auezov, according to teachers, stood out for his impeccable diligence, refined manners, and slender figure. An outstanding athlete played for the city's first football team, Yarysh.

In 1917, in the yurt of Abay’s wife Aigerim, the first play “Enlik-Kebek” written by Mukhtar Auezov was staged as a gift on the occasion of the marriage and seeing off of Akysh, the granddaughter of Abay. The first amateur artists were the grandchildren of Abai and close relatives of the author of the play.

In the summer of 1917, according to an old custom and at the behest of close relatives, Mukhtar married the 15-year-old beauty Raykhan. In 1918, their daughter Mugamilya (1918-2009) was born, and a year later, their son Chokan, who passed away early. In 1920, their marriage broke up, during the divorce, Mukhtar took his daughter, whom he took care of all his life.

Subsequently, Mukhtar became friends with Abai's son Turagul and married Kamil, the granddaughter of the great poet, the daughter of his son Magaui, but this marriage soon fell apart.

In 1918, Mukhtar Auezov and Zhusupbek Aimauytov published the Abai magazine in Semipalatinsk, which, after the release of the twelfth issue, was closed for ideological reasons. On December 1, 1919, Soviet power was finally established in Semipalatinsk. In 1919, Mukhtar Auezov joined the Bolshevik Party and subsequently advanced along the party line to the post of chairman of the Semipalatinsk provincial executive committee and secretary of the KazTsIK in Orenburg (then the capital of the Kirghiz Autonomous SSR), while trying his hand at dramaturgy and journalism.

In the autumn of 1922, Auezov was expelled from the Bolshevik Party for "violation of party discipline" and "manifestations of nationalism", which he had been a member of for three and a half years. He left his post in Orenburg and entered the Central Asian Turkestan University in Tashkent as a volunteer, contributing to the Sholpan magazine.

In the spring of 1923, Mukhtar Auezov, at the suggestion of a prominent ethnographer, historian and folklorist Abubakir Divaev, a graduate of the Orenburg Cadet Corps, took part in a scientific commission to the Chingiz volost of the Karkaralinsky district "to collect and accept the surviving manuscripts of translations of the works of Draper (English) Russian., Lewis, Spencer” and Abay’s original works – philosophical notes and poems. Auezov's companions were former well-known Alash Orda residents Khalel Dosmukhamedov and Magzhan Zhumabaev, later this cooperation served as a pretext for accusing Auezov of involvement in Alash-Orda.

In October 1923 he entered the philological department of the Leningrad State University. There, Mukhtar Auezov met Valentina Nikolaevna Kuzmina, who became his third wife. But after the first course, he returned to Kazakhstan. In the autumn of 1925 he again went to Leningrad and finished his studies in 1928. After graduating from Leningrad University in August 1928, the young family moved to Tashkent, where he entered the graduate school of the Central Asian University. In 1929, their daughter Leyla was born, later she will become a doctor of historical sciences, director of the House-Museum of Mukhtar Auezov.

In 1930, Auezov was arrested on charges in connection with the organization of young Kazakh writers "Alka" and he spent 2.5 years in prison. His wife and daughter returned to Leningrad.

After being released, Auezov taught at the universities of Alma-Ata, continuing to write plays. His friend and poet Ilyas Dzhansugurov advised Auezov to quit politics and study the work of a famous relative. And in 1933, Auezov published the first complete collection of Abai’s poems “Abai Kunanbai-uly tolyk zhinak” (in Latin) in Kyzyl-Orda, prepared the first scientific collection of Abai’s works, and his plays were played in the Kazakh Musical Theater in parallel. The family was reunited, and in 1943 their son Yernar, a future biologist, was born. By the first plenum of the Union of Writers of Kazakhstan, held in May 1937, Auezov was the brightest figure in the literary sky of Kazakhstan. But also the most persecuted: according to the old memory, his works were banned by the local NKVD bodies, removed from libraries, he himself was fired from his job.

With the outbreak of war, Auezov returned to Kazakhstan, worked at the Institute of Language, Literature and History of the KazFAN of the USSR. In 1942 he published the first book of the novel "Abai". Then he lived in a civil marriage with Fatima Gabitova, the widow of his friend Ilyas Dzhansugurov, who was shot by the NKVD in 1937. In 1943, their son Murat was born, later a cultural scientist, founder of the Mukhtar Auezov Foundation.

In 1945, in the year of the centenary of Abai, Auezov wrote the libretto of the opera "Abai", the script for the feature film "Abai's Songs", a new version of Abai's biography and several articles about him. The first book "Abai" was published in Moscow, he was awarded the Order of the Red Banner of Labor. The next year he became a doctor of philological sciences, professor, academician of the Academy of Sciences of the Kazakh SSR. In 1947, the second book "Abai" was published in Kazakh, in 1948 both books were published in Russian.

In 1947, the Decree of the Central Committee of the Communist Party of Kazakhstan “On gross political mistakes in the work of the Institute of Language and Literature of the Academy of Sciences of the Kazakh SSR” was issued, the writer was constantly persecuted, not giving him the opportunity to work in peace. In 1952, the first book "Abai's Way" was published in the Kazakh language, and in the same year, on the pages of Pravda, an accusation was again made of Auezov's lack of civic vigilance. The Pravda article dated January 30, 1952 was reprinted by Kazakhstanskaya Pravda the next day. Professor, academician M. O. Auezov was fired from the university for "bourgeois-nationalist mistakes", removed from the team of authors of the multi-volume "History of the Kazakh SSR". He is again forced, in order to avoid arrest, to secretly leave for Moscow and for two years he lectures on Kazakh literature at the Department of Literature of the Peoples of the USSR, Moscow State University.

In 1954, in Moscow, he completed the Abai's Way tetralogy, joined the editorial boards of the journals Foreign Literature and Friendship of Peoples, made a presentation on Abai's work at a solemn meeting in the Column Hall of the House of Unions and triumphantly returned to Alma-Ata, where he was reinstated in all positions.

In 1955, he was elected a deputy of the Supreme Council of the Kazakh SSR of the IV convocation and began to travel abroad as part of literary delegations, while working on the Anthology of Kazakh Poetry and with translators of the dilogy The Way of Abai.

September 28, 1957 - in the year of his sixtieth birthday - Mukhtar Auezov was awarded the Order of Lenin, as well as the title of "Honored Scientist of the Kazakh SSR". A year later, during the Days of the Kazakh Decade in Moscow (1958), the focus of public attention was M. Auezov's two-volume epic novel "The Way of Abai", published in Russian. In 1959, this work brought him the Lenin Prize. In the same year, he was elected a deputy of the Supreme Soviet of the Kazakh SSR of the 5th convocation.

In the summer of 1961 he went to Moscow for treatment. On June 27, 1961, he died during an operation. He was buried in Alma-Ata at the Central Cemetery.

Subscribe to our Telegram channel and be the first to know the news!
Next news
National Bank to issue new 20 000 tenge banknote
Photo day
President of Kazakhstan sends telegrams of condolence to Pakistani leadership