Zhaldekenov Marat, one of the graduates and the initiators of the construction of a mini-football field, now lives in the city and engaged in small business

In Kyzylkok district of Atyrau region, there is a small village Tasshagyl, which is home to just over 2,000 people. This settlement is one of the most remote points from the regional center. In the village, there is one kindergarten, a secondary school, and a rural district hospital. Public transport, as well as the bus stops,  in the village,  are missing, and external communication takes place via the village road transport.

Local residents here mainly trade in peasant farming and animal husbandry. It should be noted that near the village is one of the oldest sacred sites in Kazakhstan - the shrine of St. Matin-hodja, which many centuries ago came here to spread Islam. People say that next to the place of his burial about 50 years ago from the earth oozing holy oily moisture. Therefore, despite the absence of a normal transport road to the village, pilgrims sometimes visit here in the hope of finding the remains of miracle oil.

Until recently in Tasshagyl, as in many other remote villages, there were some difficulties in terms of engineering and social infrastructure. In recent years, local authorities have started to actively take measures to improve the social conditions of life of the villagers. In particular, the problems are solved electro - and heat supply, drinking water, natural gas, and the gasket asphalt road to the village of the district center.

However, local authorities are not the only ones who make positive changes in the life of local villagers. More recently, in the territory of Tasshagyl comprehensive school began building a mini-football field. The most anticipated among the local boys are the sports ground prepared by the graduates of 1998 on the eve of their 20th anniversary of graduation from this school.

Zhaldekenov Marat, one of the graduates and the initiators of the construction of a mini-football field, now lives in the city and engaged in small business. He recalls his childhood with warmth in his native village and says that this was not a decision for one day.

- Many years ago, when we finished 11th grade, we had 51 graduates in the stream. At that time, we made a promise to each other that in 20 years we will come again here and meet to celebrate this date. The following year, May 25, 2018, will come our 20th anniversary, so now started preparing in advance for the upcoming holiday.

- Tell us, how did you all manage to find each other and unite?

- We have created a group in the messenger, where they invited all of our classmates and those who studied in different years with us, but moved to the 90th, and will not be released together with us. Now we gathered around 78 people. So there was an idea to make any significant gift for the native village. There were several options: first, they wanted to build a large playground, then there was a variant to make an ice rink, and the third option was the construction of a mini-football field. The majority voted, of course, for football (laughs - author's comment). Of course, voting was conducted for reasons of the expediency of construction of these facilities, as well as financial costs. Football is now considered the number one sport in the world. Many children in the village in the dream of the future to become famous athletes such as footballers like Cristiano Ronaldo, Lionel Messi, etc. That means football - is a very popular sport. Therefore, the need for a football field was evident from the very beginning. 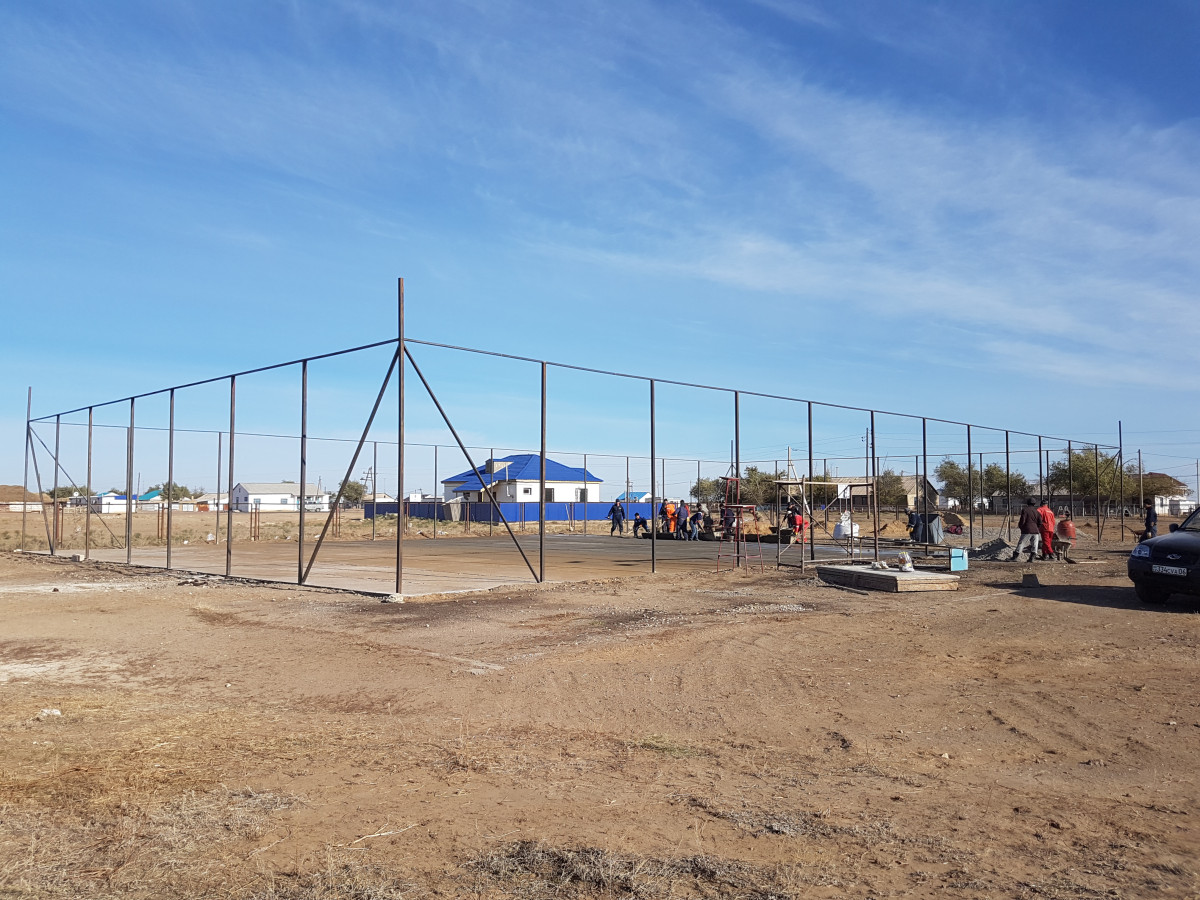 Initiative graduates now set up a mini-football field in the territory of their native school.At the same time, no one provides financial support from them.

- To build a sports ground is half the battle, then the accompanying efforts in the form of care of the lawn, maintenance of cleanliness, illumination, operation, and repair are required. That is, the field should not be left without attention. Therefore, the best option for building a sports ground, we found the territory of our school. The director, of course, supported this idea. Now in the future, there can be schoolchildren during the lessons of physical culture, also outside the school time on the field it will be possible to hold sports events, etc.

It is noteworthy that since we started the construction of a football field, experts on youth affairs of local “akimat”(Town hall) has already amassed a league among those who want to play football.That is, they are also planning to hold sporting events on this site in the future.

Marat Zhaldekenov says that, in principle, many residents of the area Kyzylkoginskogovery fond of sports, and the majority of the Atyrau region in the national team of Kazakhstan in wrestling are the only pupils in the wrestling school district.

- In the district center in the village, Miyali has a secondary school named after Halel Dosmukhamedov. Next to it 2-3 years ago, not so long ago, a football field was also equipped.So, the guys who studied at that school, 1999-2000s, are already playing in the second football league in the city of Atyrau. Therefore, I believe that the positive results of our efforts will not be long in coming. 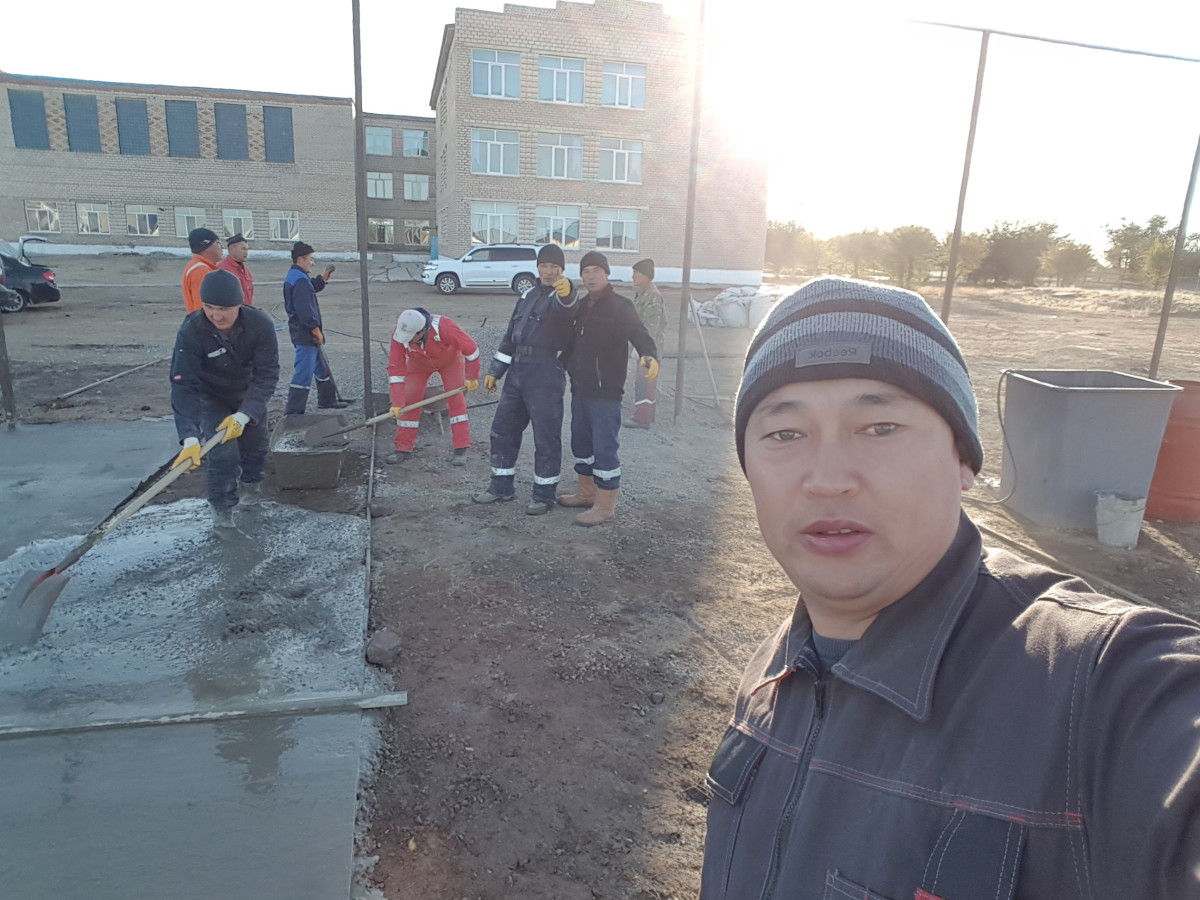 - Marat, tell us how things stand with the financial costs.

- Before the beginning of construction, we studied the price offers from different construction companies. On average, a mini-football field costs somewhere around 8 million tenge. At the same time, most of the financial costs come from the labor force. To minimize these costs, we took over most of the technical work. That is, among us, there are the guys who are already working for many years in various construction and engineering companies. Someone knows how to design and make estimates, and someone helps on the technical side. That is, among us, there are almost all specialists and workers in the construction industry.

Building materials, we are all now joined together and each helps it. For example, the male half of graduates formed 40-50 thousand tenge, while the female half is slightly smaller. We spent about 500 thousand tenge out of the total collected money for excavation. And the fence now calculated the amount in the area of ​​a million tenge. We build this field according to the technical standards prescribed by the FIFA documents.

I can not say that among us there are some rich people or other wealthy officials. But at the same time willing to help a lot among us, even those who have moved at one time and did not finish high school with us. We are driven by the most common affection, love, and respect for our native land, countrymen, and school. Obviously, this is how our native land grew up.Everyone wants to at least something to help.

- And how do you find free time for construction of a sports ground?

- In the beginning, frankly speaking, it was difficult to somehow organize everything and draw up a work plan. But as soon as certain tasks were received to begin construction, this issue quickly resolved. The main thing is desire, and time can always be found. Some of us went to work, and some of them came to help at their weekend. By the way, we have a lot of those who work on a rotational basis, so we have adjusted the schedule of work under their weekend schedules. Well, and accordingly our local guys help us too. We started construction this year.The foundation was already filled and a fence was installed. That is, we plan to complete the basic construction work this year. And in the next, we will install artificial turf.

We plan to complete the construction by May 25, 2018. Then we want to unite rural youth and organize a tournament in honor of the opening of the mini-football field. This will be our gift, which we will do in honor of the 20th anniversary of its release. Our goal is to do a useful job, not just to get together at one table and then break up.

We all know that in the villages there are very few useful facilities for the leisure of young people and, in general, for the villagers. Hence, there are all the resulting problems of society as alcoholism, addiction to deviant behavior, depression, unwillingness to learn, to work, to develop and etc. Work is work, but people should have hobbies, hobbies, places for a pleasant pastime. Therefore, we believe that sport is one of the best tools for attracting the attention of local youth.

It is interesting that the example of Marat Zhaldekenova and his classmates attracts the attention of other people. The businessman said that recently when he was talking with his friend from Shymkent, it turned out that they, too, with their release are preparing for the 20-year anniversary. Those in the beginning, of course, did not believe Marat, saying that in the market a mini-football field costs much more, and they are unlikely to be able to make such a gift to their school. But making sure the photos that people of Tasshagyl really took up this difficult task, while minimizing the financial costs, they reported that they intend to soon also start the same construction, only this time on his native land.