Beluha is a most famous mountain of Altai. In ancient times, people searched for the Shambala heavenly land here – the place of a utopian harmony. Buddhists believed that the “heart of universe” located on this mountain top, from which Buddha went to India. According to Christians, this is a place of divine pacification. Turkic faith considers it the house of Umai goddess, the patroness of women and children. According to the legend, once the man made of snow and ice named “White Ear” lived here. People tried to catch and sell this unusual magical creature. Finally, they killed it but couldn’t lift him up. Since then the mountain shaped like an ear appeared on its place. That is where the mountain’s name came from. Beluha height is more than 4500 meters. It’s located in an eastern part of the Katun ridge, on the border with Russia. 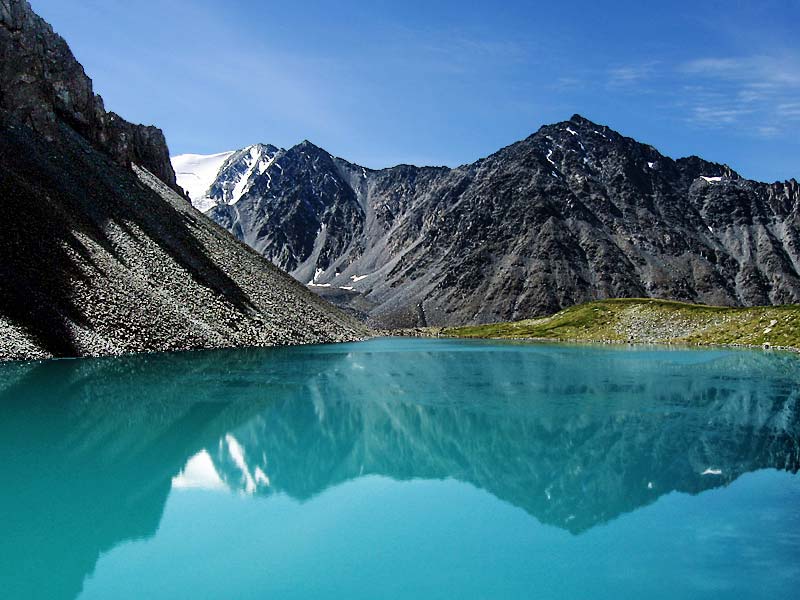 The mountain is a part of the Katon-Karagai national park. Beluha includes two sheer rocky peaks: Western and Eastern. It is covered in an eternal snow and ice – the half of ridge’s glaciers are concentrated here. The whitish mountain is formed from shale and sandy towers, which are going down on the north of the Akkemsk glacier. An opening between the two sharp rocky tops called “Beluha saddle”. Kucherla, Akkem, Idygem and White Berel Lakes flow down from the top into the Katun River. Beluha has two big lakes on its’ territory – Big Kucherlinsk and Lower Akkemsk. This relief is prone to frequent mudflows and avalanches. The motley cedar trees stretch along the mountainous hazelnut soil, especially on the northern tops. The sedge and moss bogs sited there as well. Beluha’s foothill is covered in the coniferous Siberian fir trees. The landscape is full of birches and mountain ashes. Aromatic meadowsweets and honeysuckles, cowberries and currants are hidden somewhere among the Alpine forbs. A lichen dense tundra covers the big territory. Some local remote plants are in the Red Book of Altai – lilac aconites, blue delphiniums, bright radio-gramophones, tulips and Altai onions. Tundra shrews, red-grey and field voles, live in the forest. The right rocky coast of Katun is a habitat for Altai birch mousses and zokors. Mountain goat, lynx and snow leopards live in the vertex. There are many birds here as well – white and tundra partridges, choughs, jackdaws and Himalayan accentors. Local climate is very severe – long frosty and windy winter, and short rainy summer with snow. An average annual temperature of valleys and forests in July is +8,3 degrees, the vertex is only +6,3 degrees warm. In January, it comes down to -48 degrees. First mention of the mountain is dated at the end of eighteen century. One of the first scientists who investigated Beluha was doctor and a traveler Fredrik August fon Gebler . He gathered a medicinal plants, opened Katunsk and Berelsk glaciers in 1835. The first people to climb the mountain were two brothers, Mikhail and Boris Tronov, in 1914. Today it is not only popular among alpinists, but also among tourists.