Remember that we have only few days left to give our votes for the future 100 new faces of Kazakhstan! Don’t be late!

Starting from 18th of October online voting for the participants of the second (and final) stage of the “Kazakhstan’s 100 new faces” project is going on now until 10th of November on the website www.100esim.el.kz.

The project was initiated by the Head of State Mr. Nursultan Nazarbayev in his program article «The Course towards Future: Modernization of Public Conscience».

302 candidates are presented in the poll; all of them are divided into 6 categories according to their activity areas:

It should be also mentioned that all the regions of the country are presented in the list of the candidates, together with Astana and Almaty.

The gender division situation is also interesting as the list includes 99 women and 203 men. However, if one takes a look at the leaders of the voting up to today (the information is placed on the website on the everyday basis), it can be seen that women are not at the last positions at all. For example, among the 10 leading positions by the 7th of November there are 2 women: Bella Gazdiyeva and Lyazzat Aitkhozhina. 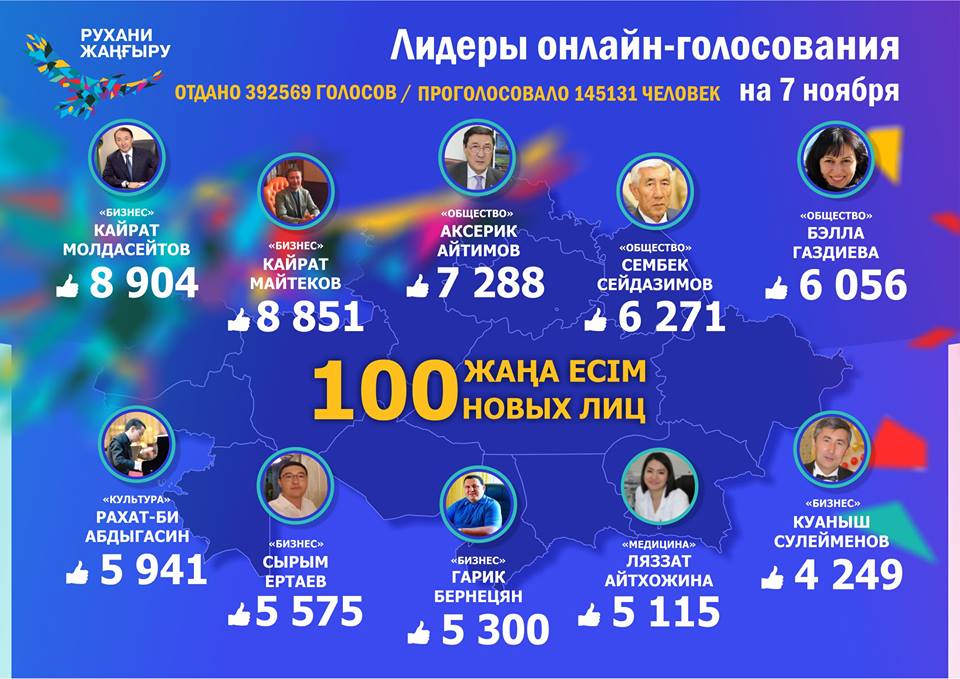 By the way, up to today 392 569 votes are given for the candidates with the total amount of people voted equal to 145 131 persons. The difference between numbers is explained by the fact that every user can give his or her vote for 3 candidates in the every section, therefore every single person can vote up to 18 times. However, the statistics shows that usually a person votes for 2-3 candidates not using all their 18 possible votes.

All the statistics can be seen in the official accounts of EL.KZ in social media as it is an operating administrator of the whole project.

Speaking about the leaders of the voting, it can be easily seen that doctors are beyond competition with the total amount of votes of approximately 50% overall. Such popularity can be justified by two factors: grateful patients and close-knit groups of colleagues that are actively supporting their favorites. For example, one of the leading women – Lyazzat Aitkhozhina – is also a doctor with 5 115 votes given for her. Business is also not far from the medicine sector with their leader Kairat Moldaseitov on the top of the list with 8 904 votes.

However, the administrators of the project appeal for the candidates and voters not to consider the voting as a competition, moreover, using some various tools and mechanisms to increase the number of votes is also strictly prohibited. All the violations of rules can be easily viewed by everyone on the website as the voting is going on online open to everybody. Significant raises of votes are always checked by the administrators so as to prevent cheatings.

We should also tell few words about the registration process which is considered as too difficult by some people. However, everything is done for the sake of the transparency of the whole procedure. The administrators want to elude the possibility of cheat schemes during the voting.

However, the closer look at the process makes everything pretty clear. There are two ways of the registration: (1) through the e-mail, (2) through the social media profiles.

If choosing the e-mail option, one needs to type his or her e-mail address to the Login space, then a person receives an approval of the registration to his or her address and can easily start to vote.

If opting for the social media accounts, the deal is even easier. All you have to do is click on the icon of the media you want to use and you are logged in within a second (taking into account that your browser remembers your passwords).

Additionally, we would like to tell the readers the stories of the youngest and the oldest candidates to be included to the list of 100 new faces of Kazakhstan.

The youngest one is 10 years old Imran Bagdat who risked his own life while saving a life of another kid in a great danger. Imran usually spends his summer vacations at his granparents’ house in the aul. This year he did the same. One day all the children were playing outside as usual. Suddenly Imran noticed that 2 years old Aisultan, the neighbor’s son, had climbed up to the water well with the cap closing badly. Understanding that there was no time to think about it or call somebody to help, Imran quickly approached the kid, grabbed him and took off the well. Imran himself got injured during this but doing good already.

As for the oldest candidate, he is 76 years old doctor of medicine Bolat Abdukarimov whose overall working experience exceeds 45 years. He started being a pediatrician, now being a prominent scholar. Examples like this are always inspiring for the younger generation as they show how working hard can lead us the top.

One more thing to mention here is that the administrators – EL.KZ journalists are not resting relying only on the online voting. Every weekend they conduct offline events on gathering the votes in the big shopping malls attracting people with some balloons and their white T-shirts. Thus, on the 29 October and 4 November the journalists went out to MEGA Silk Way and made a mobile voting platform where everybody interested could learn the stories of the candidates and give their votes to the people they want to see in the final list of 100.

And remember that we have only few days left to give our votes for the future 100 new faces of Kazakhstan! Don’t be late!

Why is vocational guidance important for secondary school students in Kazakhstan?

Teaching As a Calling

Home is the new office: PM Modi reflects on changes in professional life amid COVID-19