Some people come just out of curiosity, but most of them come to cure illness or to ask for offspring

South Kazakhstan region is famous for its shrines. Pilgrims from all over the country and even visiting foreigners, come to these places. Some people come just out of curiosity, but most of them come to cure illness or to ask for offspring. There are many holy places in and around Shymkent. Arystan-Bab is a preacher of Islam and spiritual mentor of Khoja Ahmed Yasawi. Arystan-Bab lived in the XII century. The mausoleum over his grave has been built four times. It was first erected in the XIV-XV centuries. But it had to stand a couple of centuries – the building was destroyed by the earthquake. Two domed building with iwan was built in its place in the XVIII century. But this building had stood until the XIX century. In 1909, the new mausoleum was built on its ruins. Soon the ground water began to wash away this new building. In 1971, the mausoleum was demolished and rebuilt. Although it is difficult to call the present Arystan-Bab mausoleum a historical construction, it has still had great importance for Kazakhstan as an architectural and spiritual value. The most important thing is the burial vault in the mausoleum, which has remained since its origin. 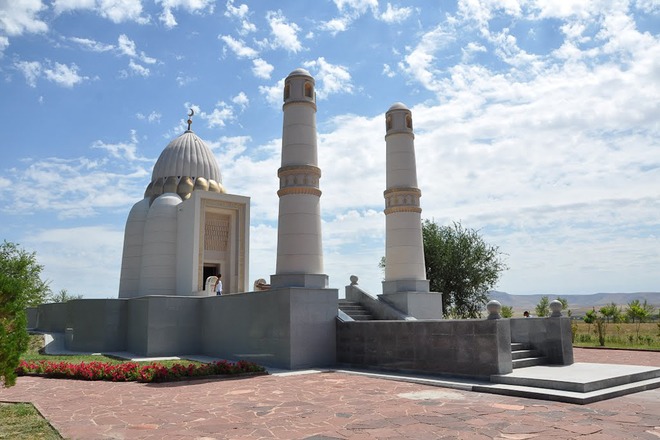 In the valley of the Balabogen River, south of the Karatau Mountains, the magnificent mausoleum of Domalak-Ana, an architectural monument of the XI century stands. It was built over the grave of Nurila Ali Sylankyzy, better known as Domalak Ana. This woman was Governor of Semirechie and Batyr Baidibek Karashuly’s third wife. She was famous for her wisdom, kindness and ability to foresee the future. There are a lot of good legends related to Domalak-Ana, judging by the facts, which are more likely the truth than the fiction. When this amazing woman died, on the orders of her grandson Dulat, the Bucharest master Abdullah Sheri erected a domed mausoleum with four tiers in 1456. For many centuries of the existence of the mausoleum, the building was repeatedly restored and rebuilt. So we cannot judge its original appearance. The current appearance of the building acquired in 1996 after the latest reconstruction. This mausoleum is one of the most revered among the believers.  People come here from all parts of the country to worship this great woman and to ask the offspring.

Sairam village is located10 kilometers away from Shymkent, on the place of the middle aged eponymous ancient city. Centuries earlier, there was Ispidzhab city on the territory of Sairam, which was a major trading city, a part of the Great Silk Road. Now only rare physical evidence remained from these cities on the territory of the village. One of them is Khyzyr Minaret dated to the IX-XII century by the historians. Once there was the mosque of Khyzyr Prophet, which was very revered in the ancient Sairam. The structure did not survive its century, natural disasters and human nature made it happen. But the minaret, in spite of everything, survived and gathers a lot of pilgrims. Once it had the height of 10.5 metres. But now it is a five-meter structure, with the diameter of 2.5 meters. Khyzyr Payghambar was a prophet. Anyone familiar with the Quran, knows the name of Khyzyr on this scripture. There he was mentioned as Musa’s companion. The ethnographer Alexander Gaines in his diary “Journey to Turkestan” (1866) mentioned Khyzyr mosque, which he found safe and sound during his ethnographic tour. In the diary it says: “Here Khazyr was saved in the contemplation of the greatness of Allah, not going out to the light of day for sixty years, then he lived for many more years and was taken alive into heaven.” According to legend, the prophet Khyzyr visits the shrines of his parents, mother Bibigiyas-Ana and father Sylyk Khoja, to honor their remains every Friday after sunset. 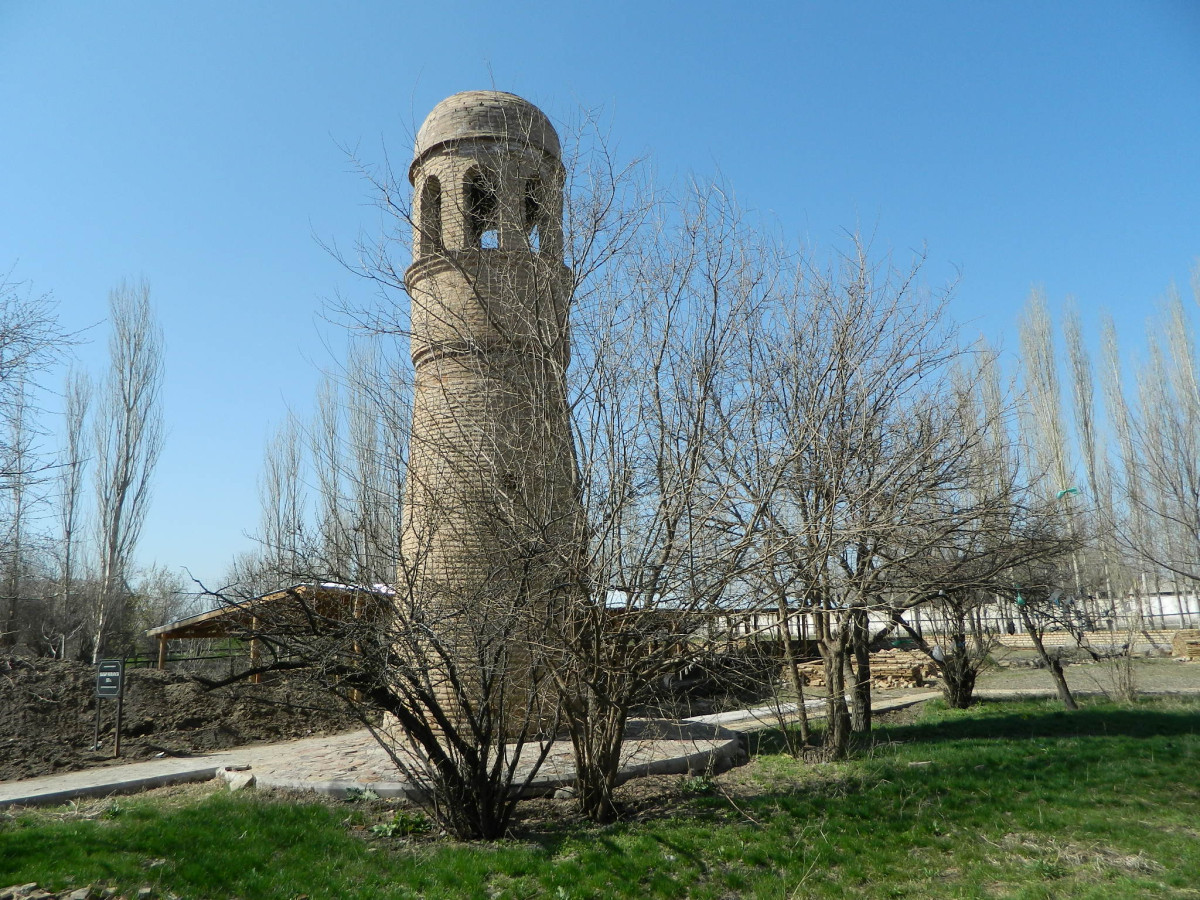 In Sairam village there is a shrine – Ibrahim Ata Mausoleum. Presumably, it was erected in the XI-XII centuries. Ibrahim Ata was Ahmed Yasawi’s father, as well as a famous preacher of those times. The mausoleum, located at the tomb of Ibrahim Ata, also has been rebuilt several times. Firstly, it was ruined due to the time, and then, in the 50s it was partially broken down by the earthquake. The mausoleum was restored, but its original appearance was lost.

In Sairam village, there is another mausoleum of Khoja Ahmed Yasawi’s mother. Her real name was Aisha Bibi, but people called her Karashash Ana. As Aisha Bibi was a noble Musa’s daughter, she got good education, according to that time, and secular upbringing. But despite her status, Karashash Ana always helped the poor and sufferers; that is why she deserved national love. After her death in the XIII century, the mausoleum was erected in her honor. But as all monumental buildings of the time, the mausoleum was destroyed and erected again many times. Besides, it is located in a seismic zone – the earthquake in this region demolished a lot of buildings. Last time the mausoleum was built in the mid-nineteenth century. Due to the fact that during its construction high quality materials were used, the mausoleum has stood until the present day. It has had only the restoration. Not far from the grave of Karashash Ana her relatives were buried: Ibrahim Khoja, Suleiman Khoja, Salim Khoja and Daut Khoja. 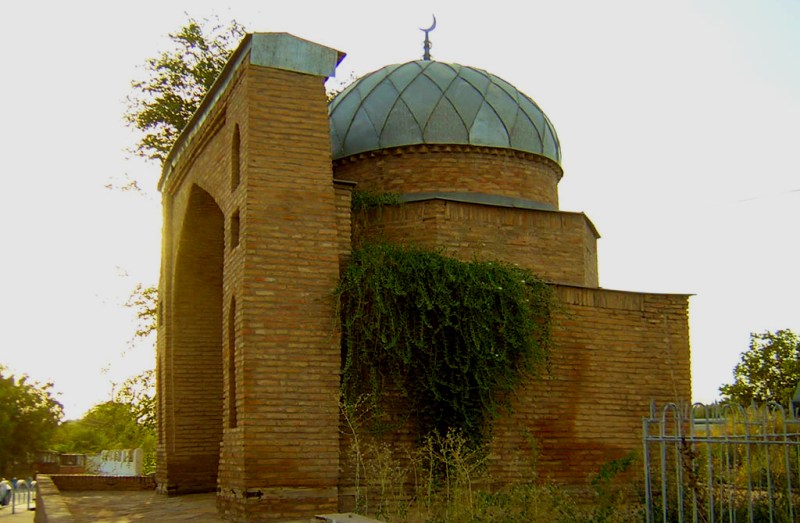