Astana has many unique sights

Astana has many unique sights. They are architectural objects of incredible shapes and sizes, monuments that have become the landmark of the city, a variety of sculptures and monuments. It should be noted that in the capital there are not any vulgar or ridiculous sculptures like the Pig duck in Finland or the naked woman riding on the back of a rooster in Cuba – even something close to resembling the avant-garde. And all because of the visual contents and non-verbal message of all the capital’s monuments and sculptures are on the alert not only city officials, but city residents. 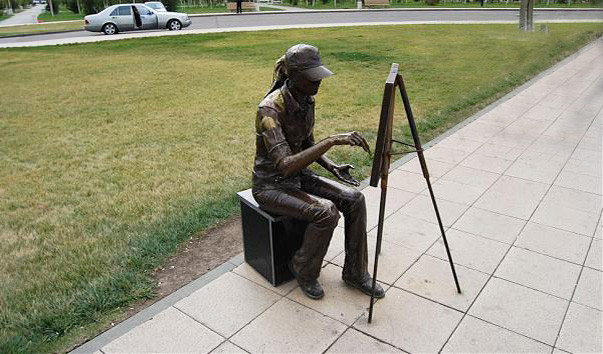 2005 became important for Metropolitan architecture. With the assistance of our President, in Astana a whole series of sculptures were emerged, united by one theme called “Citizens”. Thanks to this series, there is the sculpture of an artist made of bronze on Water-green Boulevard. This interesting monument has become a landmark of the area which tourists and local residents take photos of. And you can write your wish on a bronze easel with chalk. They say that if you strongly believe, it will come true. The sculpture had stood for a decade, delighting passers-by. But in 2015 it fell down for an unknown reason. But “The Artist” was returned to her chair safe and sound the next morning.

A prudish attitude of some citizens to objects of art in our capital is not new. Thanks to such opponents, for example, the art objects displayed in the city center to the Nauryz festival were removed in 2013. People with vivid imagination shared with journalists that sculptures depicting leather bottles “torsyk” resembled something indecent. However, each understands in the light of his depravity. But, to avoid a greater exaggeration of this theme, it was decided to remove the unsuccessful “torsyk” from the city. Now, only the pictures on the Internet recall about this case. 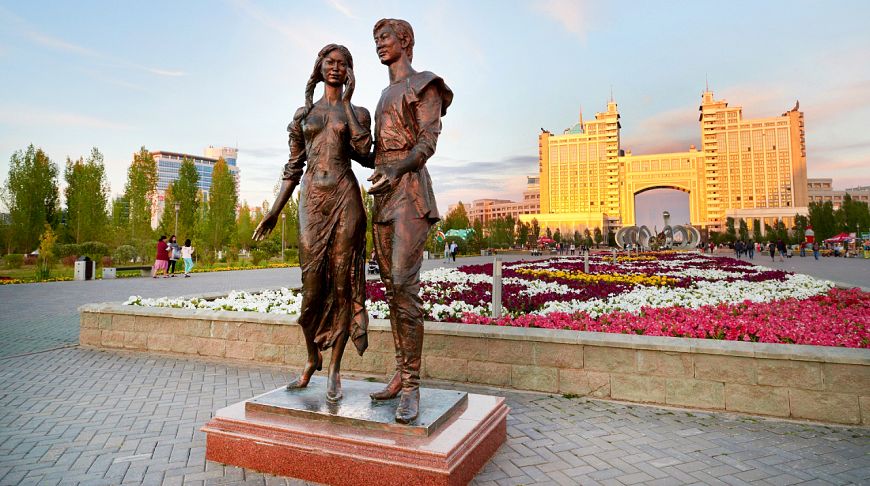 At the Lovers Park another popular sculpture called “My happiness” was set. It depicts a girl and a boy, who, apparently, share the most tender feelings. Everything is good, but the sculptor made this lovely bronze lady in a light sheer dress immodestly-fitting her intimate parts of the body. This is probably the only sculpture in Astana with a hint of erotica. The Chairman of the Union of artists of Kazakhstan said earlier that this technique of the sculptor, created this work, has been used since the time of Ancient Greece.

Sculptors deliberately covered the model with a wet sheet, which was beautifully fitting all her curves to show the beauty of the human body. This beautiful and delicate art object has been adorning the left bank of our city for the past twelve years. And, we hope, it will stay at least as many as it has. And the tourists, in turn, do not miss the opportunity to touch for good luck the bust of the girl or pat her, causing shiny bronze at these places. 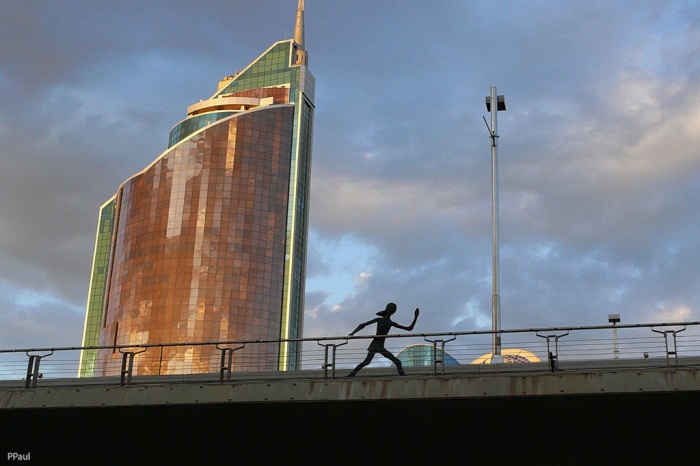 There are other sculptures from the series “Citizens” in the capital, which, at times, can be found in the most unexpected places. For example, on the bridge at the building of “Transport tower” (“Lighter”) a statue of a running girl was installed. You can assume where she is running. Perhaps she is in a hurry on a date or decided to catch the taxi where she has forgotten her purse. The sculpture is unusual and looks very interesting. You can meet another sculpture of the same series, the cyclist who stopped his bike to consider the area. Also there is a couple who is sitting on the stone and chatting.

The theme of lovers is, in general, a favorite theme among Metropolitan artists. They are depicted everywhere. There are also other lovers who are hurrying on a date: a guy is waiting checking his watch, and a girl is in a hurry to meet him. All these sculptures are not in vain called “Citizens”. It seems like real people, who were suddenly found during their occupation and captured in bronze. But it is worth noting that the monuments and sculptures in our city appear and disappear with surprising regularity. And they wander around the city. So if tomorrow you do not meet any of the above mentioned sculptures, do not be surprised! 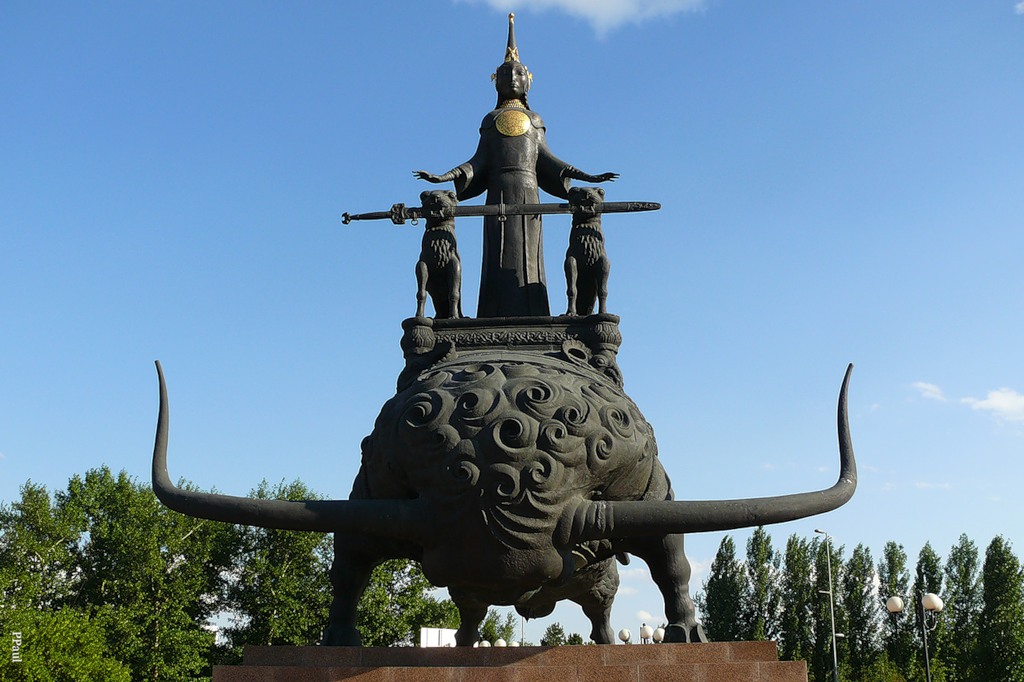 In 2008, near the building of the former Presidential center of culture (now the building belongs to the Military-historical Museum of Kazakhstan) the grandiose monument “Zher-Ana” (Mother Earth) was set. The author of this work of art is the sculptor from Russia Dashinim Balzhanovich Namadkov. The monument depicts the Queen of Saks, Tomiris, standing proudly on a huge bull. Near Tomiris, the two leopard-guards with swords in their mouths seated on a bull. The length of a bull is more than 10 meters, and its horns span is 7 meters. The name “Zher-Ana” suits this monumental statue. Indeed, under the leadership of this militant Queen the scattered tribes were united, who later made the first state on the territory of modern Kazakhstan. The sculpture is still considered one of the most beautiful in Kazakhstan. 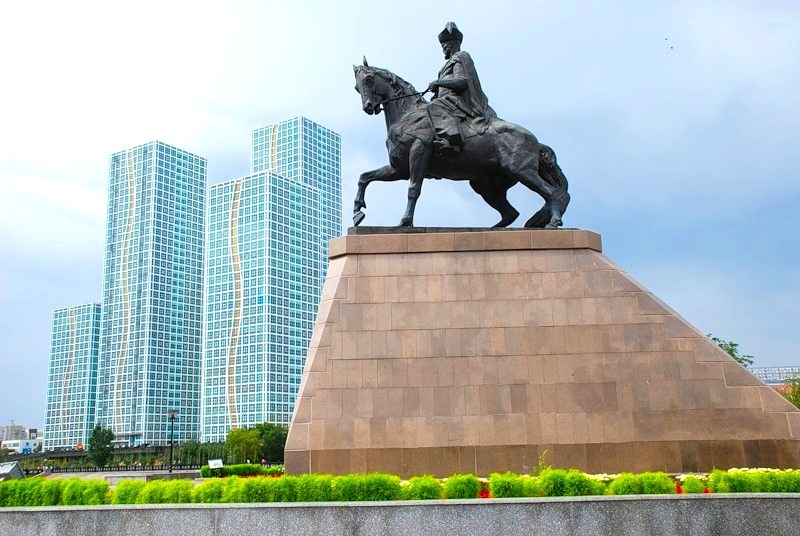 This is another monument of Astana from the category of the most popular. Kenesary Khan monument was inaugurated in 2001 in a picturesque location on the banks of the Ishim River. The sculpture weighs nearly 10 tons and has 11-meter height together with the pedestal. This monument is a symbol of Kazakhstan’s independence, because Kenesary Khan was the instigator of the revolt for the liberation of the Kazakh khanate from the yoke of the Russian Empire and spent his entire life defending the interests of his people. The authors of the monument are the architect Shota Valikhanov and the sculptor Nurlan Dalbay.