I will leave the stage when I cannot sing “Bulbul” 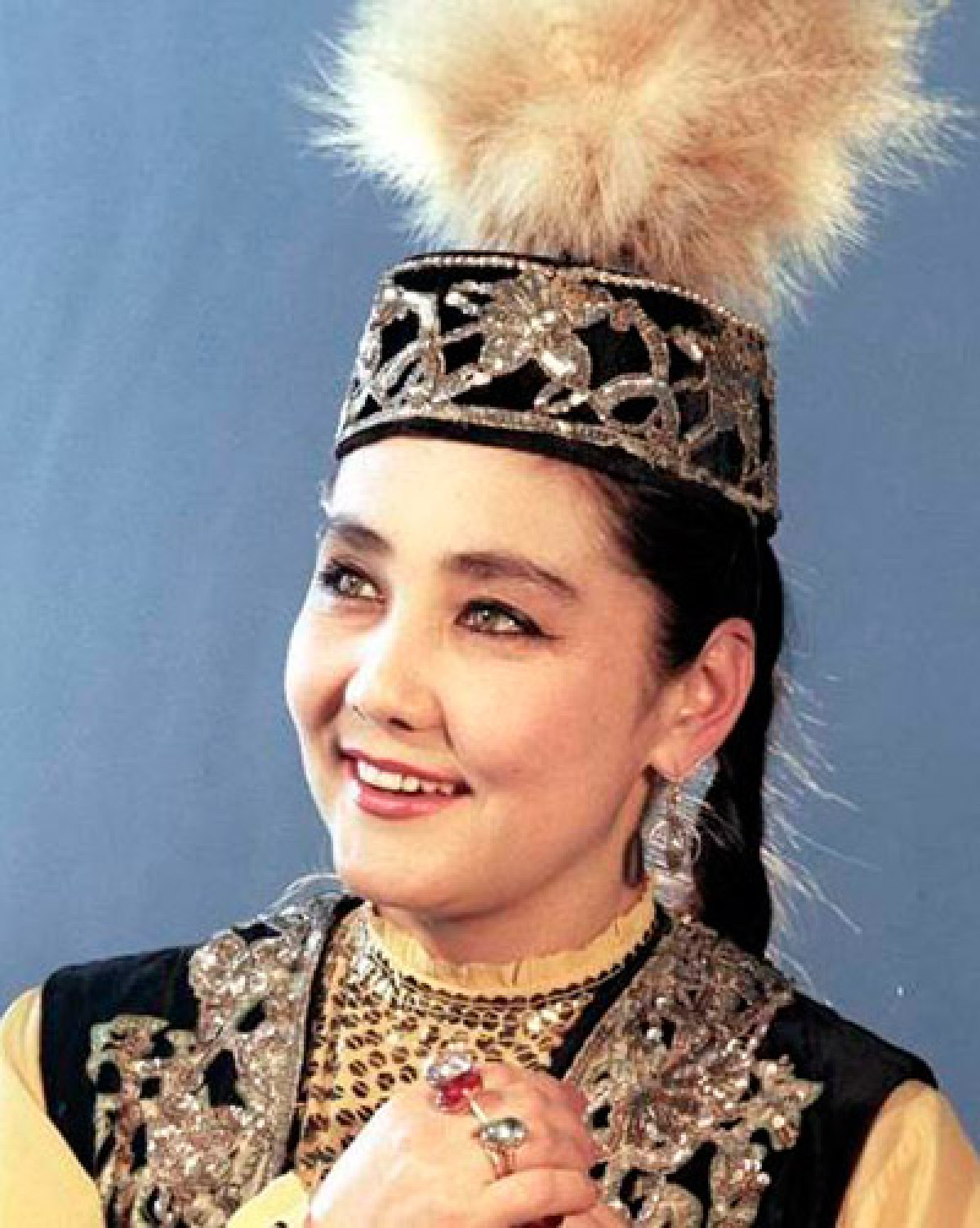 My surname is from relatives on mother side. My father’s uncle on his mother side is Nabi, and his father’s name is Tolegen. In the documents it is written Telegen.

My interest in songs is from my father, and my voice, of course, is from my mother. They met each other because of the song. Once my father was walking in the street in Semey and heard a song from the garden. He was standing for a while listening to the song. It was a young girl’s voice. She was singing song by song. He opened the door and went into the garden… That girl who was singing was my mum. My dad fell in love with her song and at the end he took her to marry (Kazakh tradition).

Our neighbor in the huts of workers of Semey meat plant was a person called Burov (I do not remember his name), he played the accordion, his wife played the guitar and their children could play stringed instruments. In that house there was a “concert” every Saturday evening. My dad and mum did not miss it. My dad used to start with his baritone “Ah you, a wide steppe”, and then my mum joined with her beautiful voice “Strings are sonorous, silvery, you pitch your voice correctly, and you will definitely come to the wedding after the accordion”. Suddenly they asked me to come to the center. I used to stand on the stool and sang high “Why do you need me, my darling, I knew..” I want to cry when I recall those days. Childhood turns out to be the happiest time!

I was also affected by the title “The enemy of the People”. I had never gone abroad until 1965.

I learned a lot in the years of the war. Especially labor, working hard since I was a child has been helping me for all my life. Singing is a troublesome job. The person who wants to be a singer has not to take pity on himself. Kazakh people say “Even you sing, you have to give your soul”. Though, at my current age, I have to practice my voice before visiting someone.  In Russian it is called “распеться” (warm up before singing). I will not be probably asked to sing by people, that will be better, but if yes, it will be a shame if my voice is not ready.

There is a saying among singers “If you do not practice your voice one day, you will notice it, if two days, your neighbors will, if three days, your listeners will.” That is true. Generally, singers are tragical people. If an ordinary person dies once, a singer dies twice. Firstly, he dies when he loses his voice, precisely his song. And then he dies as other people die when they lose their soul. Therefore, we are trying to make our singing life longer.

A voice does not remain unchangeable as you are getting older. If I sing F-minor as I did before, one day I will fall down. Now I am singing “Bulbul” in D-minor. There are some peculiarities and benefits of singing D-minor. I think my audience appreciates this.

…Galina Iosifovna told me “your voice is fantastic. You should study at conservatory”. I said “I have been already working in tin manufactory”. She smiled at me. Because I had thought that conservatory is a place where tins are made.

Galina Iosifovna is a person who changed my life. She was the first person of intellectuals, in its original meaning, who I have met. I have hardly ever met such a kind person. I had vocal lessons with Galina Iosifovna every day. Beginning with diction, articulation, she got my voice back in about 2-3 months. I heard different stories about Shalyapin, Nezhdanova, Sobinov, I felt at first the beauty of Pushkin, Lermontov, Esenin’s poetries by her reciting them, I found out about French revolution, exciting mysteries of Marx’s life. Galina Iosifovna taught me to understand deeply the song lyrics.

When I was working in the tin manufactory, an excellent person called Igor Anatolyevich Lebedev was a manufactory director. He loved my singing. I sometimes used to make a flaw while I was singing loudly. At that time he said mixing his jokes with the truth “Is there anybody to save us from this artist? Let us send her to study.”

Finally, municipal komsomol made a decision to send me to audition in Almaty. It was spring in 1948. I had just been 18 years old. I had never been abroad before and travelled by train. I popped my head out of the window and was looking at columns on the way. I was thinking “Where do these columns go, do they ever finish?

When I was noticed at Republican Olympiad and went to conservatory, I even fought not to study. My thought was to go back to Semey, continue my job in the tin manufactory, earn money and look after my parents and siblings. Eventually, I was taken to Komsomol Central Committee. There was a secretary called Dymshits. He told me “You have to understand that it is not your voice, it is people’s voice, it is our country’s treasure.” Though, he concluded “If you do not study, you will be taken to court.” I was terrified. Later I understood everything.

I remember that there was an abundant apple harvest in 1948. When it was raining, there were a lot of apples falling from mountains. At the intersection of Gogol and Furmanov streets there was a two-storey hostel. But I could not live long there. I got married in my first year. My mum’s words “You are not going to study, you, girl, are going to Almaty to get married” were right..

I was not successful in my marriage life. I have got married three times. I was not happy with all my three husbands. Generally, “Who to blame: a man or a woman?” as it is said, it is hard to say what is the reason of woman’s happiness. Someone finds happiness in family, someone finds it in herself. I have found my happiness in myself, in my talent.

In fact, I am really keen on children. I think I would have at least five children if my marriage life was successful. Thanks to God, all my children have grown up very well. When I was on tours they looked after each other, they brought up each other. I have never gone into any rooms to make my children’s life better, to help them.

The person who got my voice back is Nadezhda Nikolayevna Samyshina. I admired her as “My vocal mother” until she passed away (at the age of 99). She had been keeping me in the regime of a sick person for two years. During these two years I was not allowed to open my mouth. We had been suffering for two years. In return, in the year when I finished the conservatory, she employed me in the opera theatre right away! This is the power of a real teacher.

Since my childhood I have grown up not letting anyone to blame on me. When I was titled as “the enemy of People”, I was hurt by my colleagues, friends’ angry words, but I tried to strike them back.

Artistic environment, Kazakh environment helped me to know all richness of my mother tongue, to absorb fantastic temper of our nation. I was growing up in russian-speaking environment in Semey. Kulash apai said: “Hey, girl, improve your Kazakh”. There was a big contribution of the radio in improving my Kazakh. I asked Nutfolla, Kuandyk, Mukagaly the meaning of these and those words. I used to bother Zhusipbek agai. One of the happiest moments of my life was the saying of Zhusipbek agai after one concert: “My dear, you revived a “Diamond”. I am pleased.”

I think there is no region where I have not been with a concert. I got fame and all medals when I gave my concerts there. People’s artist of Kazakhstan, People’s artist of the USSR, Kazakhstan state prize, the USSR state prize, Order of the Red Banner of Labor, Order of Lenin.. all these came one by one. The main thing is that it was done everything to become a talented singer. In opera you cannot sing other things except your parts. My work in Philharmonic gave me a chance to discover all beauty and lyricism of Kazakh songs. “Bayanauyl”, “Bir biday arpa” (A wheat barley), “Zhalgyz arsha” (Lonely juniper), “Bir bala” (One boy), “Iligai”. “Shili ozen” (River overgrown with cane), Buryltai”, “Ainamkoz”, “Gakku”, “Kazakh waltz”, “Kaiykta” (On a boat), “Terbeldi tyn dala” (Strong steppe swung), “Kuanamyn” (I am glad), “Zhan saulem”.. It is impossible to finish counting.

One day we went on a tour to Shymkent. We gave a concert on an open stage in the park. It was boiling. Bakhyt Ashimova, who performed before me, came to me and warned “I could hardly bear it, do not laugh, there is a swarthy man sitting at the front, who is not just watching, but drinking a jug of water..” When it was my turn, as soon as I came up to the stage I noticed that man. He was really a swarthy man. He had been really sweating. He was not interested in song. Little by little he was drinking water from the jug. Suddenly he did more than Bakhyt had seen: he was pouring water from that jug in his head… I could not bear it. I forgot my song and even laughed.

In opera theater in the first years I performed on the stage Zhibek from “Kyz Zhibek”, Gulbarshyn from “Alpamys”, Enlik from “Enlik Kebek”, Gilda from “Rigoletto”, Violetta from “La Traviata”, Carlina from “Don Juan”.

We should appreciate dignity of independence, value of today’s life. I will leave the stage when I cannot sing “Bulbul”.

Subscribe to our Telegram channel and be the first to know the news!
Next news
How to expand a business through franchising
Photo day
Kazakhstan wins gold of World Cup on bullet shooting