30.06.2020 874
About traditions and culture of Armenian people living in North Kazakhstan 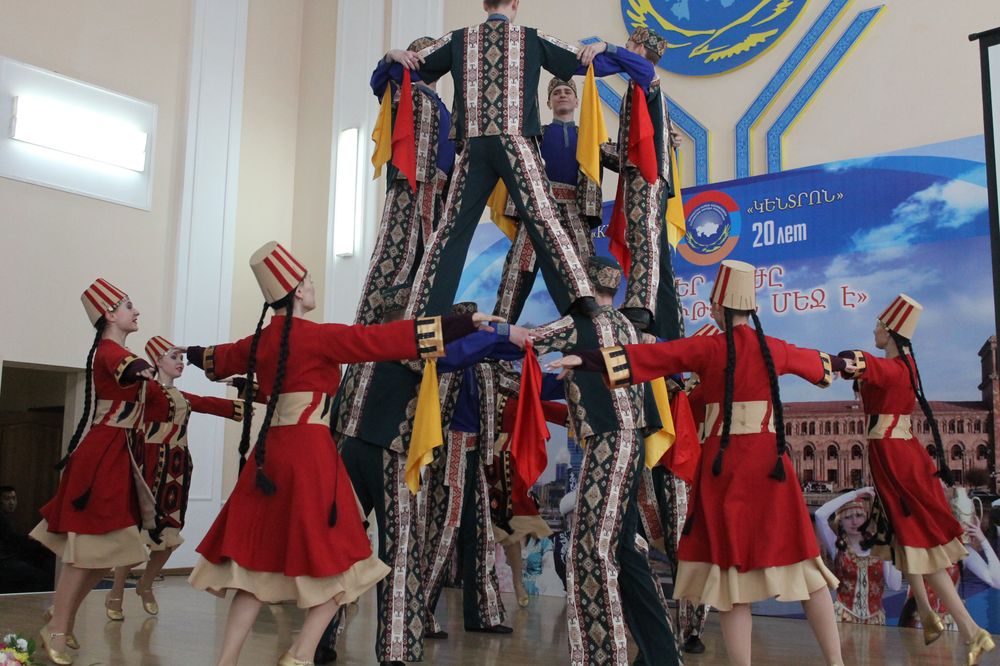 Armenians are one of the oldest nations on earth. The Armenian written language was created over one thousand six hundred years ago in 405 AD. Thanks to it the original culture, language developed, the history of development, its ups and downs was chronicled. The Armenian culture comes from the depths of the centuries, just like the country itself. The talented people of the Armenian land have left our generations a huge cultural heritage and continue to create masterpieces. Since 1997, Kentron Center for Armenian Culture has been functioning in the North Kazakhstan Regional Assembly of People of Kazakhstan. Malkhasyan Gevorg, Arakelov Roman, Gevorgyan Gevorg, Grigoryan Hrachat, Martirosyan Babken, Gevorgyan Vruyr, Baghdasaryan Gor, Kinasov Ruben and others took active part in its establishment. Roman Rubenovich Arakelov has been the permanent chairman for 17 years, who has done a lot for the development of the ethnos and has worthily represented the city of Petropavlovsk in different stages of our country. In 2014 his permanent deputy Gevorgyan Gevorg Vardanovich took over the chairmanship.

"The creation of ethno-cultural associations and their unification in the Assembly of People of Kazakhstan was the only right decision during the hard years of formation of the Kazakh statehood," said Gevorg Gevorgyan. The main goal of the center is to familiarize North Kazakhstanis with the history, traditions, culture, art of the Armenian ethnos, to promote comprehensive mutual enrichment of ethnic cultures of the people of Kazakhstan, including the development of cultural relations between Kazakhstan and Armenia.

Svetlana Malkhasyan and Anush Tsutsulyan make a huge contribution to the development of the Armenian Center. It is they who bring to life all ideas that later become bright and exciting events filled with special meaning, a sense of patriotism and comprehensive love for their historic homeland and the Republic of Kazakhstan. Since its establishment, Kentron Center for Armenian Culture has paid special attention to strengthening inter-ethnic and interfaith harmony, fostering high spiritual and moral qualities in the younger generation, and preserving and promoting the native language, culture, customs and traditions of the Armenian ethnos. The task of the ethno-cultural center is to consolidate and unite the Armenian Diaspora through the development of language, culture, traditions and customs in common with all cultural centers.

"We celebrate especially widely the festivals that have formed over the centuries and have become popular. One of them is the Armenian national holiday Terendez, celebrated annually on February 13 - the main actors of this day are lovers. April 7 is the Day of Beauty and Maternity, accompanied by festivals and concerts for mothers and grandmothers. The Memorial Day of the victims of the Armenian Genocide in the Ottoman Empire, which is celebrated on April 24, is also included in the national memory days," Gevorgyan explained. According to the Chairman of the Center, there are about two thousand Armenians living in the region. Many of them are engaged in business in different directions: they build roads, produce consumer goods, food, grow bread, are patrons of arts and sponsors of events and holidays. "Many have lived here for not a single decade, and Kazakhstan has become our second homeland. Our country has created all the necessary conditions for the activities of ethno-cultural associations, which have initiated and participated in many socially important events. Today the Assembly is a reliable factor of stability, a solid foundation of public consent, a pledge of sustainable development", emphasized Chairman of Kentron Center. One of the organizers of the center, Svetlana Malkhasyan, told about the cuisine of Armenia.

"The cuisine of Armenia is as ancient as its history. No holiday is held without national Armenian cuisine. Armenian culinary traditions date back to ancient times. It is known that Armenians had an idea of fermentation and baking processes as early as 2500 years ago. The traditions of cooking many Armenian dishes remain unchanged. The fame of the Armenian cuisine has long spread outside the country. There is no place in the post-Soviet space where Armenian cuisine is known, loved and cultivated. Juicy smoky shish kebabs, exudes a mind-blowing flavor, baked vegetables - khorovats, soaked with the taste and smell of a fire, melting in the mouth of the most delicate dolma, cooked without a gram of butter," Svetlana Malkhasyan shared. By the way, traditionally Armenians cooked food on fire. The hearth-type clay oven started to be called toner and keeps this name to this day. Armenians also used clay dishes. Bread is baked in toner, porridges are cooked, fish and poultry are smoked, vegetables are baked, soups and other dishes are prepared. Later on, the toner migrated to all peoples of Transcaucasia, becoming an integral part of national cuisine.

"Spicy fragrant spices are popular: pepper, cilantro, fenugreek, black pepper, mint, tarragon, basil, thyme and, of course, garlic and onions. Cinnamon, cardamom, cloves, saffron and vanilla are also popular for confectionery. Traditional Armenian bread lavash is loved all over the world. Armenian cuisine simply does not exist without lavash. It is not in vain to eat, have lunch, breakfast and dinner in the Armenian language that one thing is replaced by ‘eating bread’" added Svetlana Malkhasyan. By the way, Svetlana Malkhasyan has been working since the foundation of the Kentron Ethno-cultural Center and considers the main task of the association to preserve and revive the culture of the Armenian people.

The center holds many events, for example last year the excursion into the culture of the Armenian people was organized by Kentron Center for Armenian Culture public association within the framework of Day of National Culture project, implemented by the Department of the Assembly of People of Kazakhstan at the M. Kozybayev North Kazakhstan State University. In a hall of university to attention of spectators the exhibition of decorative and applied art, fair of national dishes, and also the bright concert program have been presented. Poems and songs were performed in Armenian, and the Deputy Chairperson of the Armenian Ethno-cultural Center Svetlana Malkhasyan spoke about the traditions of the Armenian people. Armenian national dances so ignited the guests of the event that they danced to the sounds of Caucasian lezghinka.

Last year, the Ethno-cultural Association organized a Grape Festival, within the framework of which the guests could get acquainted with the national Armenian cuisine.

The Grape Festival is one of the oldest festivals of the Armenian people. Its appearance is related to the Christian tradition, when on the day of the Dormition of the Mother of God the priest blessed the bunches of grapes brought to the church, and then distributed them to the parishioners. From that day on, the grapes could be harvested both for harvest and for winemaking.

The leadership of Kentron public association invited its friends, representatives of the center, as well as members from other ethno-cultural associations to the celebration.

The main attributes of the Festival were an exhibition of different sorts of grapes, Armenian wines, decorative and applied art. In addition, a master class was organized for the preparation of a traditional Armenian dish - dolma, which is prepared with the help of grape leaves.

As Svetlana Malkhasyan noted, they celebrated this holiday for the first time. “We have tried to convey the respectful attitude towards grapes which all Armenians feel in the historical Motherland. Today, grapes are grown everywhere in Armenia. The most popular varieties are "kangun", "voskehat" and "areni". The harvest of the first grape harvest traditionally opens the wine making season," said Svetlana Stepanovna.

After the tea party, the guests took part in a dance flash mob, where they learned to perform Armenian folk dance movements to the sound of duduk.

The family of Roman Arakelov, former Chairman of Kentron Center, has lived in Kazakhstan for almost 50 years. "In our family the work always stood in the foreground, the father is very sensitive to the performance of all duties, because he was, is and remains an athlete. Now our father works as a vice president of the Kulager Hockey Club. Father has a golden medal from the Assembly of People of Kazakhstan. There are two of us in the family. My older brother works as a builder, and I teach English at school" Roman Aarakelov’s daughter Yelena said.

According to Roman Arakelov, the family honors and remembers the father and grandfather of the Great Patriotic War participant Ruben Babadzhanovich.

"My father, a sergeant-communication officer, went through all the war and met Victory in Berlin, was awarded three orders and many medals, including "For Courage". Life goes on and I am grateful to my children for giving me 4 grandchildren. Kazakhstan is our homeland. Here I and my children received education, work, gratitude for my work and the most important thing is a quiet and joyful life", Roman Arakelov said.

The events held by the Armenian Center "Kentron" have long been loved by the people of North Kazakhstan. Armenian folk songs, dances, rituals, traditions, which reflect the culture and identity of the people attract people of different nationalities, and therefore the concerts are held with great participation of spectators. Young people are also attracted to this ancient art, that is why the youth wing is actively working in the center.