The appearance of a baby in the family is a joyful and exciting event. Many Kazakh traditions and customs are associated with this

In cultures of different nations, there are rituals that are designed to protect newborns from physical effects of the outside world and from the influence of otherworldly forces.
In Kazakhstan, there has always been a cult of the child in the family, which is reflected in folklore. Kazakhs believe that the house, where there is a child, is bright and happy, and the house without children is like a grave. Children's traditions of the Kazakh people are closely connected with folk beliefs and cults. The rituals performed for girls and boys until they reach the age of six are identical.

The birth of a child is a holiday in the family. The person who first notified about this receives gifts.
The most important period in the life of a newborn is the first forty days. The number "forty" has a symbolic meaning for the Kazakhs:
- the Messenger of Allah was 40 years old when the holy verses of the Koran were revealed;
- pregnancy lasts 40 weeks;
- cleansing a woman after childbirth is also associated with this figure.
Kazakh traditions at the birth of a child are designed to protect him from evil spirits and diseases. Therefore, during the forty-day period, relatives lit a lamp at night near the baby's cradle, sewed amulets to his clothes.
At this time, events and rituals were held, designed to strengthen the health of the baby and mother, socialize it - make it a full-fledged member of the community. They are held in the first, third, seventh and fortieth days of the life of the newborn. 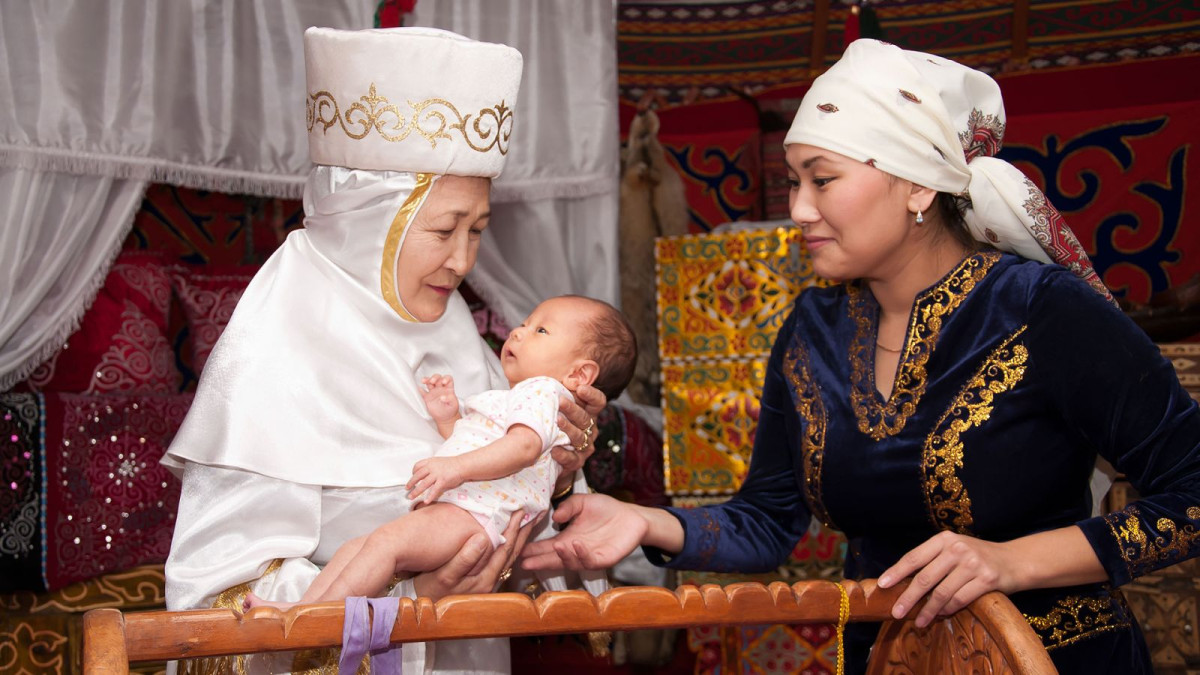 To celebrate the birth of a baby, a shildekhana festival is held. It is held on the day when this joyful event occurred. Relatives, friends, and relatives come to the home of young parents to celebrate the emergence of a new member of the community. They congratulate parents, express wishes to the baby, and in the evening - have fun and enjoy a hearty dinner. The father of the child slaughters the sacrificial lamb and distributes the meat to relatives and friends.
The third day is set aside for a besik-to-ritual. On this day, parents receive a cradle as a gift, and a woman who took birth and cut the umbilical cord (Kindik Sheshe) swaddle the baby, bandages it with specially stitched ribbons, puts it in a besik (cradle) and covers it with a fur hat and a fur coat.

Before that, she fumigates the cradle of herbs to exorcize evil spirits and diseases from there. Above the baby’s bed, they hang a bridle and whip - symbols of the Kazakh people. All actions are accompanied by songs and toasts. Then the guests are served with dishes.

On the seventh day, a feast is again organized, at which the Kindik sheshe the neck of the ram. She cleans it of meat (then the child will be clean), she puts the bones of the vertebrae on a stick so that the baby is strong and holds her head. This charm is stored throughout human life.

When a child is 40 days old, he is officially presented to his relatives, friends, and relatives. This holiday is called “balany kyrkynan shygaru”. The rite has a mystical significance, it is honored in modern urban society.
It is believed that before the expiration of this period, the baby is too weak and unprotected from the effects of the external environment, and especially - the evil forces. Until the end of forty days a newborn is not cut off his nails and does not cut his hair, he is not shown to strangers.
After 40 days from the moment the baby is born, the “Kyrkynan shygaru” is held. The day when this happens is considered the second birthday.

40 days is an approximate term: If a newborn baby is a boy, they celebrate it in 37–38th day, if a girl –6 41st. Kazakhs believe that in this case, the son will grow up brave and powerful, and his daughter - docile and obeying.
For “kyrkynan shygaru” they prepare:
- white tablecloth embroidered with national ornament;
- wooden bowl with a spoon;
- silver coins (20, 50 and 100 tenge) with a total of 40 and the same beans;
- silver jewelry;
- scissors.
Parents prepare clean festive clothes for the child, and relatives bring “korzhyn” (a bag).

The mother of the baby fills the bath with boiled and cooled to 37–40 ° C with clean water.
He pours boiling water on coins (amulets from diseases), beans (a symbol of prosperity and health) and puts them in a wooden container.

In this bowl, senior women pour 40 spoons of bathing water. They express their parting words and toasts to the child and then pour it back into the font. Parents of the baby give these women gifts of coins and jewelry from a bowl.
Kindik sheshe or another respectable older woman bathes the newborn and puts on clean clothes, cuts off his hair (parents keep them as a charm) and nails (burn them). After bathing, you cannot pour out water. It is poured into containers and used when the child is restlessly sleeping or nervously acting. This water wash baby.
The ceremony ends with a feast with abundant food, songs, and fun. Guests present cooked korzhyn salu, thereby emphasizing their attention and a good attitude to the new member of society.

Birth of a child: signs and customs of the Kazakh people

In addition to the rites described, there are rituals that are held at the end of 40 days.
According to the ancient traditions of the Kazakh people, upon the completion of the forty-day-old, the child is officially given a name. This is the prerogative of the older generation. Usually, father-in-law is called an heir or heiress. If young parents independently give the child a name, then this is considered an expression of disrespect for their elders, which is unacceptable in Kazakh families. Children are named after saints, celebrities, depending on the time of birth.

Grandfather bends to his right ear and says: "Your name (pronouns the name of a baby)!". The same is done with the left ear. Sometimes this role is assigned to the mullah. Then all those present are announced the name of the newborn and recite a joint prayer asking for his well-being and health.
After that, kalja is prepared for the mother of a newborn - a dish of boiled lamb. Parents treat guests with a hearty dinner.

When the baby is one year old, the Tusau Kesu ritual will be done. This tradition’s meaning is to help a baby to walk.  This ritual is organized by the kindik sheshe.
These traditions in modern Kazakh society are a reason to gather loved ones. Although the rites have lost their original meaning, such kinds of celebration demonstrate that people still respect the traditions.

(All image were taken from open source)