One of the traditional German holidays is Oktoberfest. On this day, the Kazakhstani Germans will celebrate the end of the sowing campaign and organize a holiday for farmers. This day is called a beer holiday in the world. And it is traditionally celebrated in Munich every year, the capital of Bavaria. On this day, tourists from all over the world flock to Munich in order to celebrate Beer Day. However, the beer festival was not held on a large scale this year, with the announcement of quarantine due to the coronavirus pandemic. The history of the origin of Oktoberfest is also interesting. It began with the marriage of Crown Prince Ludwig I and Princess Theresa Saxons to the Bavarian throne. On the 12th of October of 1810, the wedding of the khan's dynasty had become a national holiday. All the townspeople were invited to the wedding. They went to the square outside the city. In honor of the princess, this lawn was named Theresa Square later. A free bear is distributed for Munich residents and a horse racing is organized during the wedding.

This holiday has been so out of the imagination of the royal family that Ludwig issued in order to celebrate Oktoberfest every year. An ancient tradition has remained the same over the years, and various innovations have been introduced only in different years.

In 1811, the farmers joined the holiday. They turned this day into a celebration of their achievements on the farm. And since the beginning of 1818, various entertainment devices, such as swings and carousels, had been installed on the square as well. The first beer kiosks will be set up this year.

There are some reasons for the inclusion of the agricultural fair at the beer festival. This step was taken not only to improve Bavaria's agriculture, but also its economy. A horse racing, organized in the first years of the holiday, is not held today. It was held in 1960 last time. On the other hand, agricultural fairs are organized on a regular basis. There was no celebration in 1813, due to Napoleon's war. Since 1819, the celebration and holding of the holiday has been given to the Munich City Council. In 1850, Bavaria monument was erected at Theresa Square. The monument was created by Johann the Baptist Stiglmeier and his nephew Ferdinand von Miller. 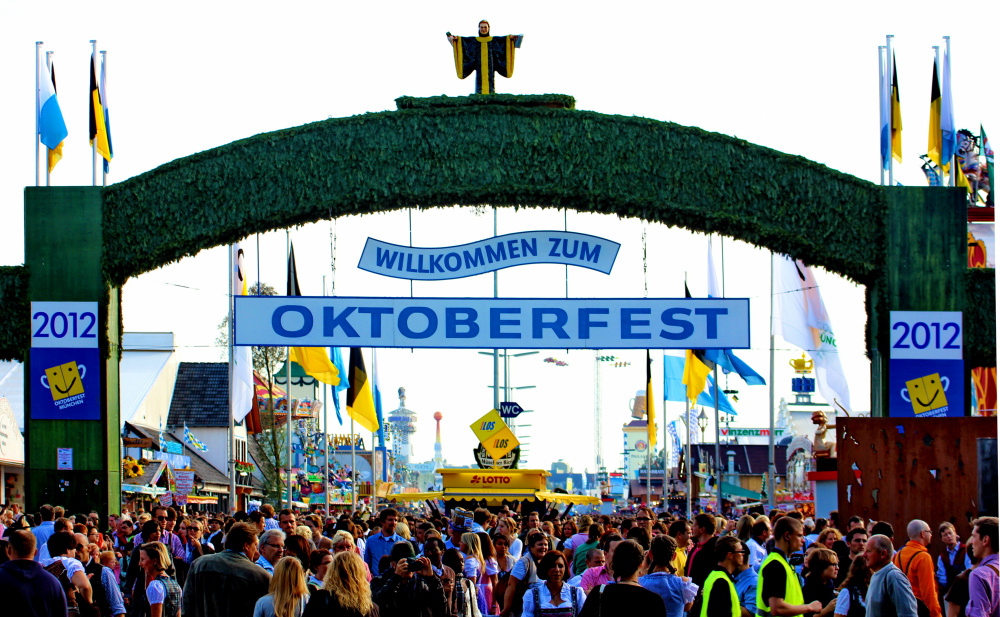 An architect of the project is Leo von Klenze, the sculptor is Ludwig Schwantaler. In 1854, due to the spread of the cholera epidemic, Oktoberfest was not held again.

In 1866, Bavaria's alliance with Austria against Prussia and its participation in hostilities led to the postponement of the festival. In 1873, cholera returned to the country and postponed the festival once again.

In 1887, the opening ceremony of the festival included a parade of owners of the beer kiosks. Since the beginning of 1892, the beer has begun to be bottled.

In 1910, Oktoberfest celebrated its first centenary. The participants of the centenary have "sucked" 120,000 liters of beer. It was a big record for that time. In 1913, the largest “Braurosl” kiosk for 1,200 seats was opened at the square.

The first World War of 1914-1918 hindered the celebration once again.

In 2010, Oktoberfest celebrated its 200th anniversary. The Germans, reviving their ancient traditions, reorganized the horse race again. The holiday, that has a history of more than two centuries, still lives not only among the Germans, but also among the peoples of the world. The representatives of the local German population are celebrating “Beer day”, and some of them are celebrating “Agriculture day”.

It has become a national holiday among the people, even the most famous people of Germany come to celebrate the festival together on this day. Not only ordinary citizens of the city, but also the government officials and even high-ranking ministers and their families take part in the parade.

The festival starts on the third Saturday of September and lasts for 16 days. That is considered as the first Sunday in October. Therefore, its exact calendar date has not been set.

The first day of Oktoberfest starts with a parade of brewers. They are the main hosts of this holiday. The owners of beer tents and various cafes gather during the holiday. A parade is started by the mayor of Munich. The marchers carry barrels of beer. It begins in the center of the city and heads towards Teresa Square.

On the first Sunday after the opening of the festival there will be a celebration of national costumes. About 10,000 Bavarians, dressed in national costumes and accompanied by musicians, go from the Bavarian parliament building through the city's central streets to Theresa Square.

Every Tuesday is considered as a family day. There are discounts for the food and family attractions on these days. There are special rooms for children, and parking for the children in wheelchairs for parents. There are also microwave ovens to heat children's food.

During the holiday, there are competitions among waiters. The waiters carry and distribute beers in 10-12 liter mugs at the same time. An empty mug weighs 1.3 kg. This means that waiters carry 27-28 kilograms at the same time. In this regard, the competitions are organized among the waiters for ordering. Since 2017, a waiter Oliver Strumpfeld has not competed in a waiter competition. He carries 29 filled mugs in one lift and weighs 70 kilograms.

The second week of the festival is called "Italian Week" by the Bavarians themselves. Because it seems that Italians are flocking to Bavaria these days.

Traditionally, at the opening of the festival, the mayor of the city opens the barrel of beer with his own hands at exactly 12 o'clock. This is the start of the beer marathon. Then the festive process will begin on the streets of the city. A symbol of the city "Munchner Kindi" begins the parade. "Munchner Kindi" is a young girl on a colorful horse, holding a big bell in her hands, dressed as a yellow-black nun.

There is a ceremonial carriage of the mayor of Munich and the Bavarian administration next to him. At the end of them, there are carts loaded with barrels of beer imported from all over Germany.

In addition, snipers, artists and members of the orchestra wear their national costumes there. They are followed by agricultural workers. The participants of the parade will have a variety of ancient musical instruments. Various traditional music and performances will take place during the parade too.

This traditional parade dressed in national costumes is called the most beautiful and historically important in terms of organization around the world. The procession runs on one route a year, that is up to 6 kilometers long.

At Oktoberfest, they drink beer in a liter mug. These circles are called "Mass". The "Mass" had appeared for the first time in 1892. About 70,000 of these mugs are sold during the festival, and visitors will take them away as a souvenir.

More than 7 million tourists visit Munich during the festival. It is broadcasted live on all the national TV channels. That is why, Oktoberfest is included in the Guinness Book of Records as the largest holiday in the world.