FROM NOVEMBER 1, KAZAKHSTAN INTRODUCED AN UPDATED VERSION OF THE STATE EMBLEM

From the first of November, the amendments to the law ‘On state symbols of the Republic of Kazakhstan’ come into force. 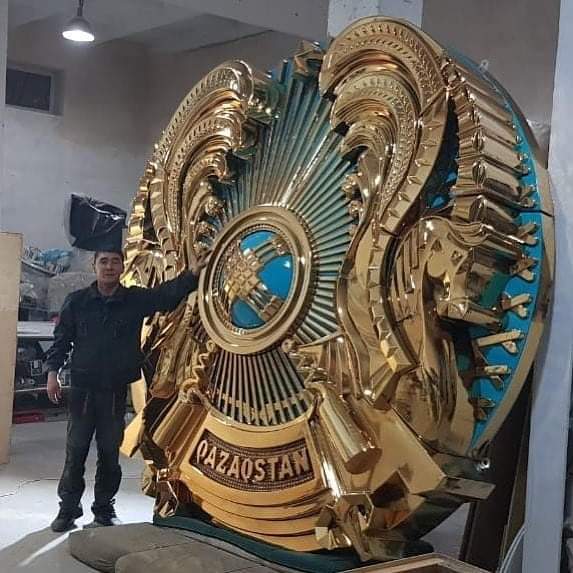 It should be reminded, September 12, 2018 Reference centre hosted the meeting of the Scientific and Technical Commission under the chairmanship of the head of Technical Regulation and Metrology Committee Arman Shakkaliyev with the participation of the author of the State Emblem Zhandarbek Malibekov and management of ‘KazInSt’ RSI. Protocol resolution approved the change of the State Emblem with the date of introduction on November 1, 2018.

Thus, a change has been made in the spelling of the word ‘Kazakhstan’ in the Latin script ‘Qazaqstan’ throughout the text of the standard in the national standard of Kazakhstan ST RK 989-2014 ‘State Emblem of the Republic of Kazakhstan. Technical conditions’. The novelty is connected with the switching of Kazakh language to Latin alphabet. This is the first noticeable change since its creation.

To develop the changes, a number of working sessions were held with the participation of developers and the author of the State Emblem of the Republic of Kazakhstan.

Last time technical adjustments to the State Emblem were made in 2017. Pantone was used previously, the international color system Lab describes all the colors and takes into account the texture and shine, colors are brighter and wider than it was. Also all the names of the constituent elements and terminology are presented in the technical standard.

The State Emblem of sovereign Kazakhstan was officially adopted in 1992. Its authors are well-known architects Zhandarbek Malibekov and Shot-Aman Ualikhanov.

On 24 January 1996, Constitutional law ‘On state symbols of the Republic of Kazakhstan’ was adopted.

In May 2014, Technical regulation and Metrology Committee adopted a new standard of the State Emblem of the Republic of Kazakhstan, which establishes basic technical conditions.