‘Turkiya’ Association of Turks’ Republican Public Organization was established in 1991 in Almaty. 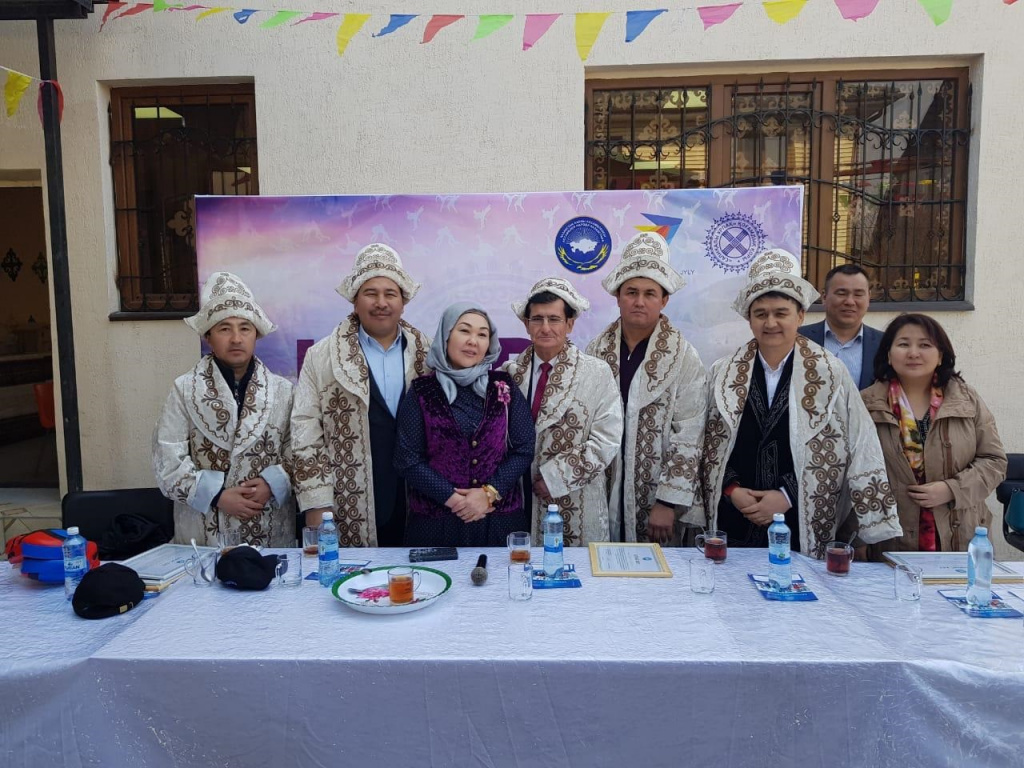 It was formed in order to strengthen inter-ethnic harmony in the country, comprehensive mutual enrichment of the national cultures of the people of Kazakhstan, and preservation and development of Turks’ traditions, customs and culture. After five years, the Association was called Ahyska and elected its Chairman.

During these years, branches of the association were established in the regions, districts and places where Ahyska Turks lived compactly, classes and Sunday schools for studying their native language were opened, and national dancing and singing groups were formed. In May 1999, at the Republican Conference of Ahyska Turks held in Almaty at the House of Scientists, Ziyatdin Kasanov was elected the new chairman of the Ahyska Association.

Ahyska Turks were deported by Stalin's regime to the territory of Central Asia and Kazakhstan in November 1944 as other nations as well. Historical homeland is the south-western regions of modern Georgia, which previously were part of the Ottoman Empire. After the Russian-Turkish war in 1829, on the basis of the concluded peace treaty, these lands passed to the Russian Empire and were named Akhaltsikhe Сounty. Before this period, the history of the Turks who inhabited these areas is inextricably linked to that of Turkey. More than 200 thousand Turks live in the Republic of Kazakhstan.

As Shakhismail Asiyev, deputy chairman of Ahyska ethnocultural center in Almaty, says, the establishment of such an organization as the Assembly of People of Kazakhstan has become the basis for peaceful coexistence of people of different nationalities.

At present, the centre's main goal is to support and promote learning Kazakh, Shakhismail Asiyev said. All his grandchildren studied Kazakh, and he himself fully supported the policy of trilingual education.

In each populated area, representatives of ethnic group councils have been elected. Representative offices of the association operate in such cities as Nur-Sultan, Karaganda, Aktau and Ust-Kamenogorsk.

Executive committee and 10 committees on various directions of work were elected at the Association Council. Main directions of activity include assistance to all-round mutual enrichment of national cultures of the peoples of Kazakhstan, including Kazakh and Turkish, including development of versatile cultural relations between Kazakhstan and Turkey; participation in cultural and educational activities among persons of Turkish nationality studying the history, preservation and development of the language, culture, customs and traditions of the Turkish people: studying the problems of the Turkish people and representing them in State and other public associations of the Republic and other States; introducing representatives of other nationalities and ethnic groups to the history, culture and art of the Turkish people.

During the period of the society's activity, its leaders and members have participated in more than 15 different international conferences, congresses, seminars and meetings held both in our Republic and abroad.

The Association branches take active part in national holidays of the people of Kazakhstan, state holidays of the Republic. ‘Ahyska’ newspaper is issued in three languages: Turkish, Kazakh and Russian since October 2004. Three Sunday schools have been opened and operate. The Turkish language is taught at more than 30 general education schools and in places where Turks live close together.

A part of cultural and sport events are held jointly with the national and cultural centers of other people of Kazakhstan. Children who learn their native language are provided with textbooks and teachers with methodological aids with the assistance of the Embassy of Turkey in Kazakhstan. Teachers, pupils who won contests, and actively involved in activities are constantly encouraged by valuable gifts. From time to time, Turkish language teachers travel to the Republic of Turkey for internships at the expense of the host country.

Every year, about twenty young citizens go to study at educational institutions of Turkey. Comprehensive financial support is provided for the printing and circulation of books by Turkish writers and poets from Ahyska Association.

The Republican Association holds a weekly meeting of the Executive Committee, where current plans and upcoming events are discussed. Regularly, the activists in the field work among the population to explain the importance of strengthening friendship and harmony between people, the policy of the First President of Kazakhstan Nursultan Nazarbayev to build a democratic, socially-oriented state, the preservation of public stability in it.