‘ASAR’ IS A SINCERE AND GRATUITOUS AID

Within the framework of the calendar of the Assembly of People of Kazakhstan "Caravan of Mercy", the charitable month "Asar" was launched.

A special feature of Asar campaign in April is to provide assistance to those in need of employment and to assist in the implementation of some hard work.

The charity has a huge potential for uniting the principle of all citizens of our country, and one of the key areas of the Assembly is to promote the development of charity.

"Asar" is an ancient custom of the Kazakh people, according to which people, gathered together, sincerely and perform work completely free of charge that is impossible for one person or one family.

"Ken bolsan kem bolmassyn" is the folk wisdom of the Great Steppe. In it the wide soul of the Kazakh people and inherent in "Uly dala" gave value to mutual help, participation and not indifferent attitude to the neighbor. It is the stratum of traditions originating in the customs of generosity, hospitality and mercy of the Kazakh land that formed the basis of APK’s charity calendar for 2019, taking into account the traditions of the Great Steppe: "Shashu", "Asar", "Sybaga", "Zhylu".

The first month of the calendar was dedicated to the ancient tradition of "Sarkyt" - treats from the festive table. The tradition has a spiritual, moral and educational character - to suppress sacrilegious attitude to food and calls to share it with those in need. 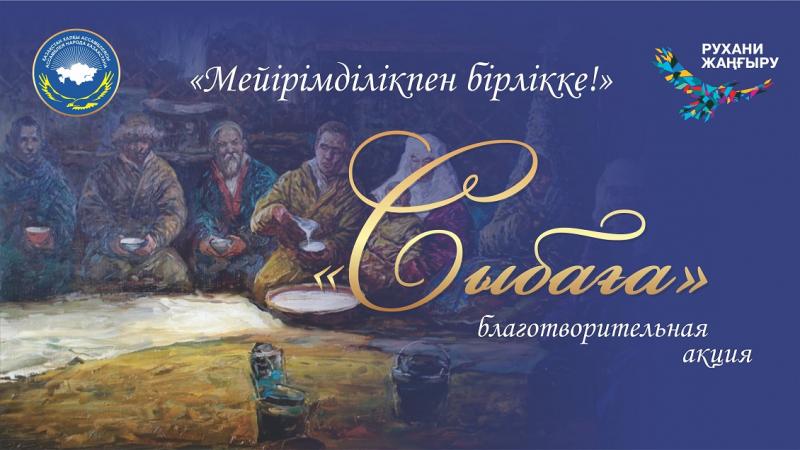 The second action in February was called "Sybaga", which means a kind of share intended for relatives, matchmakers, respected families and aksakals. It was aimed at providing support and assistance to the elderly, orphans and the sick. The third charitable month under the aegis of Assembly of people of Kazakhstan "Shashu" started on March 1 – Day of the Assembly of people of Kazakhstan’s establishment and Day of gratitude. "Shashu" is a ritual of sprinkling sweets (sometimes even coins) of the hero of the celebration during a joyful event. Kazakhs believe that coins and candy picked up from the ground or floor will bring good luck to the guests.

All actions of the project "Caravan of Mercy" this year will be held under a single slogan "Meyirimdilikpen birlikke!

At the same time, as the organizers are sure, it will bring every citizen of Kazakhstan closer to the culture of the Kazakh people.