Ekibastuz is an industrial city

Ekibastuz is an industrial city. And only giant enterprises can surprise guests here. One of these is the mine “Bogatyr”. In 1985, it was included in the Guinness Book of world records, reaching a maximum annual capacity of almost 57 million tons of coal. Today it is one of the largest coal-producing sections in the world. 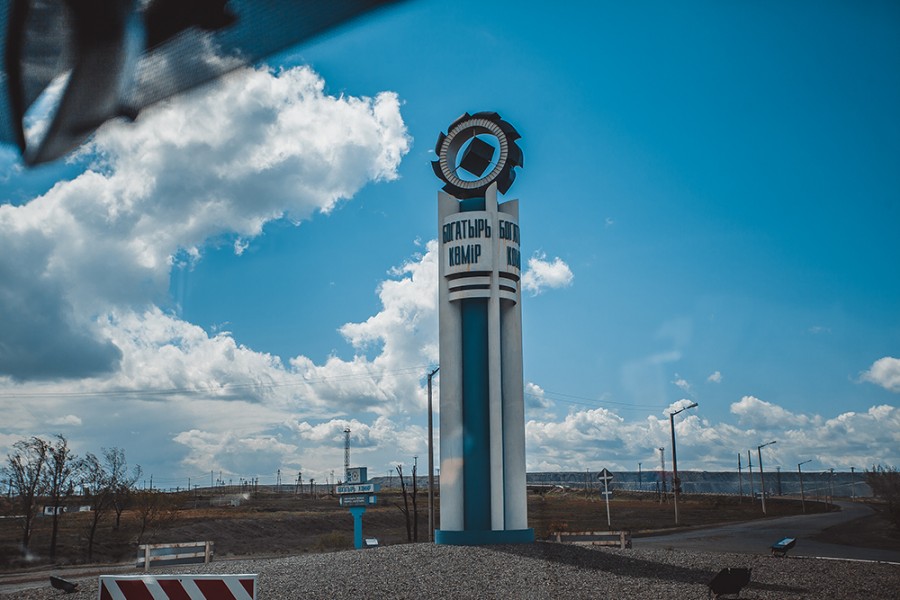 But it is not so simple to get there. In Ekibastuz there are a few mines. They are of course in the countryside. And on the road leading to the enterprises there several checkpoints, which only employees of the section or people with granted permissions are allowed to go.

Theater begins with a hanger, and mine with an observation deck 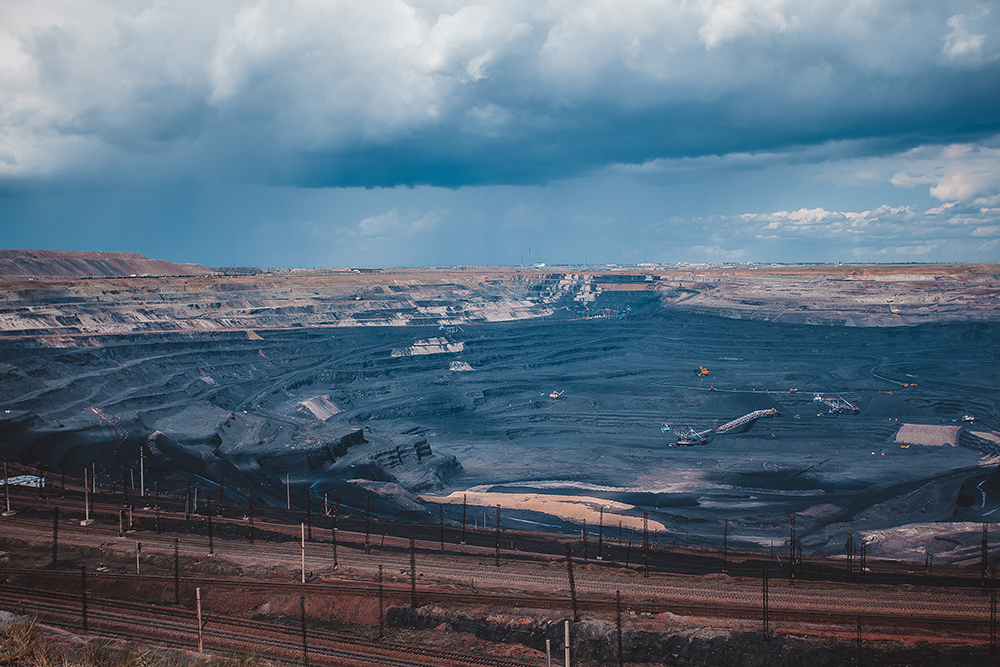 The observation deck of Bogatyr makes the first indelible impressions. It offers a view of almost the entire mine. On the black background bright yellow dump trucks, excavators and other quarry equipment are clearly visible. Here is a layout section, where you can see all the details at the observation tower.

In the building of the ABK there are heads’ offices, laundry, canteen, auditorium and other facilities. Here guests are read the safety instructions. And no matter which time you are coming to the mine. The object is not safe, and being there, you have to know exactly what to do and what not, recognize the signals and not to go anywhere without an escort.

The danger is primarily the high voltage and the giant machines. And it is impossible to approach the cliffs, climb the embankment up and even just walk on the road. There are scurry trucks, whose drivers cannot see pedestrians from the cockpit. 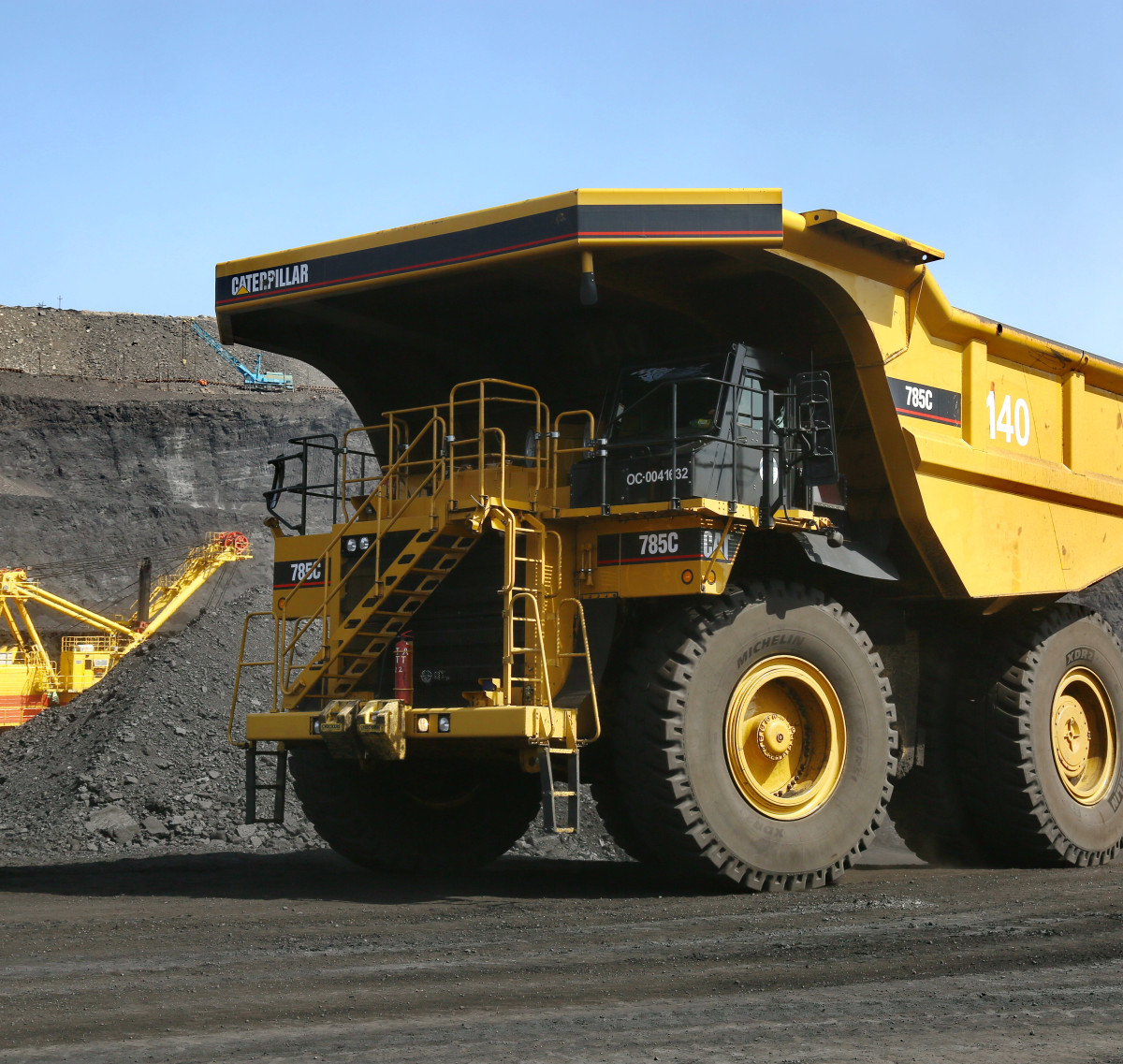 In order to make people in the section visible from afar, they are given special clothes. Guests also have to wear them. White and orange helmets to protect the head from impact, transparent glasses to prevent dust in eyes, puttees, boots, gloves, a jacket with pants and a bright vest with reflective elements.

During the descent into the mine beginners’ ears often pop and they want to yawn. The lowest point is at the depth of about 530 meters. The section seems to compose several enterprises. It is divided into several units, stations and sites. They each have their own tasks and their own special atmosphere. 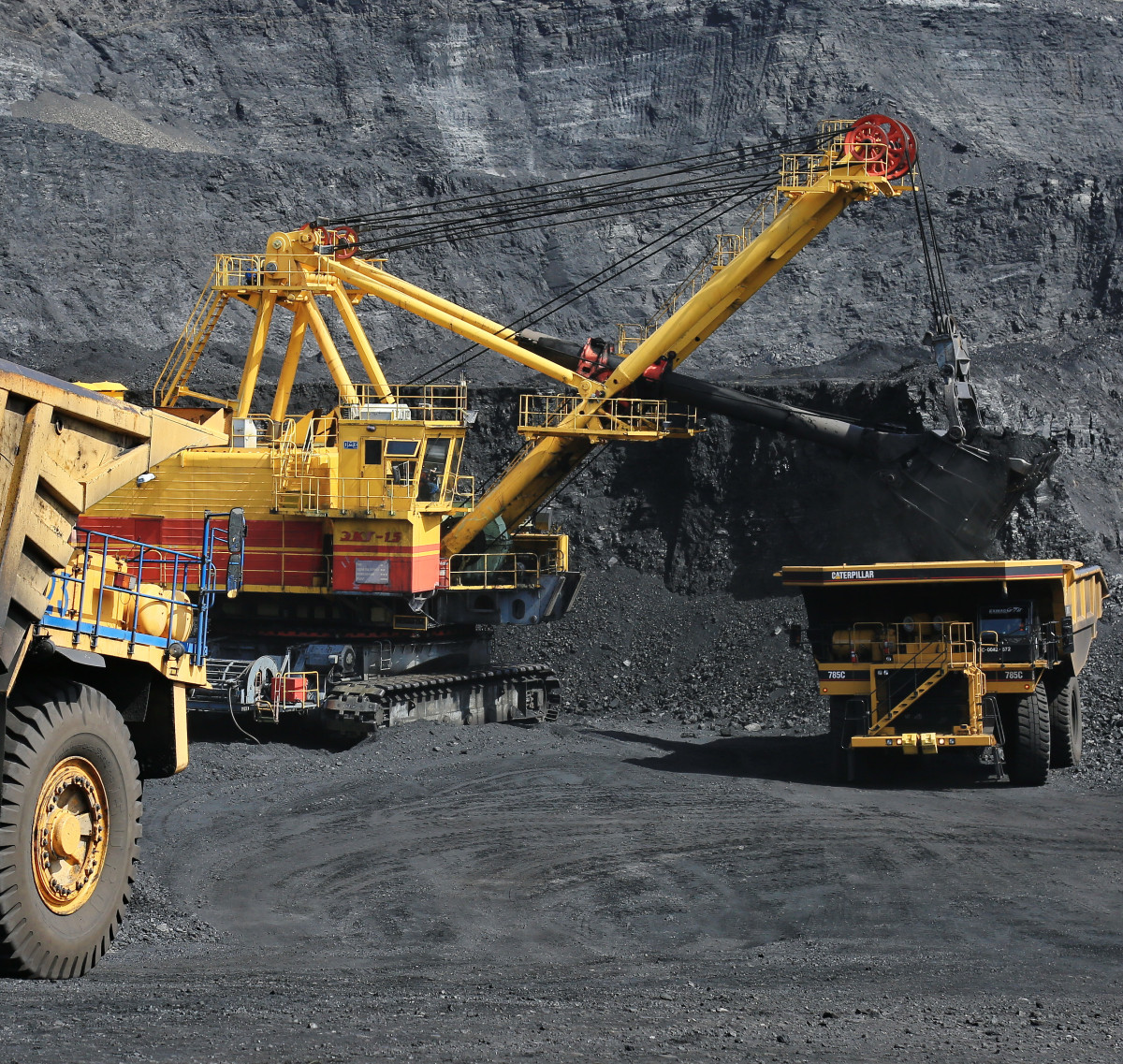 Miners even have peculiar funny jokes, which the common man may not understand. Going down to the mine workers tell each other stories, jokes on a professional theme and not only. But jokes end after having arrived at the place of work. Each of the miners has a big responsibility. They must not only be able to manage their equipment, but also know how it works. This helps to identify faults and take actions.

Jewelers of their business

One of incentives of improvement of professionalism for employees of the Bogatyr is the contest “Best in profession”. Every year more and more miners participate in this event. They have to show how well they know safety regulations and how to feel their car. As a rule, the questions about safety workers of the Bogatyr answer quickly and correctly. It seems that they know safety regulations better than the multiplication table.

Machinists of the Bogatyr manage multi-ton equipment with millimeter precision.

And the majority of workers cope well with a practical task, which puts the jury faced with a difficult choice. In such situations, the speed of the task takes into account. And the tasks are different. For example, drivers of walking and crawler-mounted excavators close with the bucket a match box, put a loop on the invisible tooth, and transfer a bucket full of water trying not to spill it. 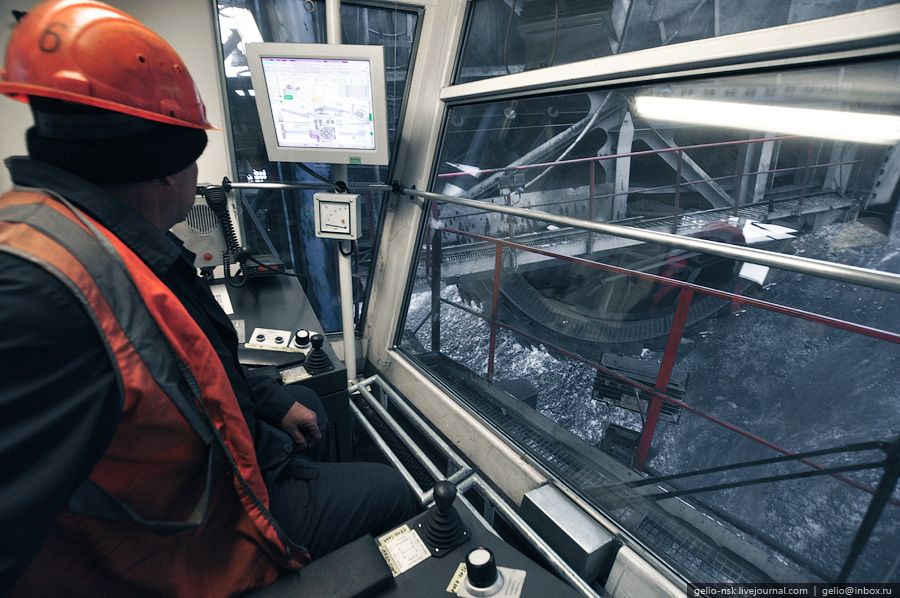 Machinists of locomotives produce the coupling of dumpcarts. Thus in place of the hitch a full glass of water is put, which cannot be spilt during performing the task. Brigades of bucket wheel excavators compete with entire teams of three people. This competition is traditionally held every year on the eve of one of the most important and largest festivals in Ekibastuz - the Miner’s Day. Rewarding of winners takes place in a festive atmosphere. And lost participants are given prizes too.

One of the incentives of good work is a good rest. The Bogatyr provides its employees with a vacation in the pearl of Pavlodar region – the area Zhasybai. Among the mountains by the lake there is resting area of miners “Berezka”, where in summer and winter, workers travel with their families. The camp “Karlygash”, located near the “Berezka” is organized for miners’ children.

The coal of the Bogatyr will last another 70 years

The technological scheme of coal production: coal mining at the Bogatyr mine is conducted by bucket excavators, shipping by rotary. The coal is brought to a rotary excavator in a stack of different layers, thus averaging the ash content of coal – up to 42 percent and increasing its calorific value, followed by shipment of the goods in the wagons. 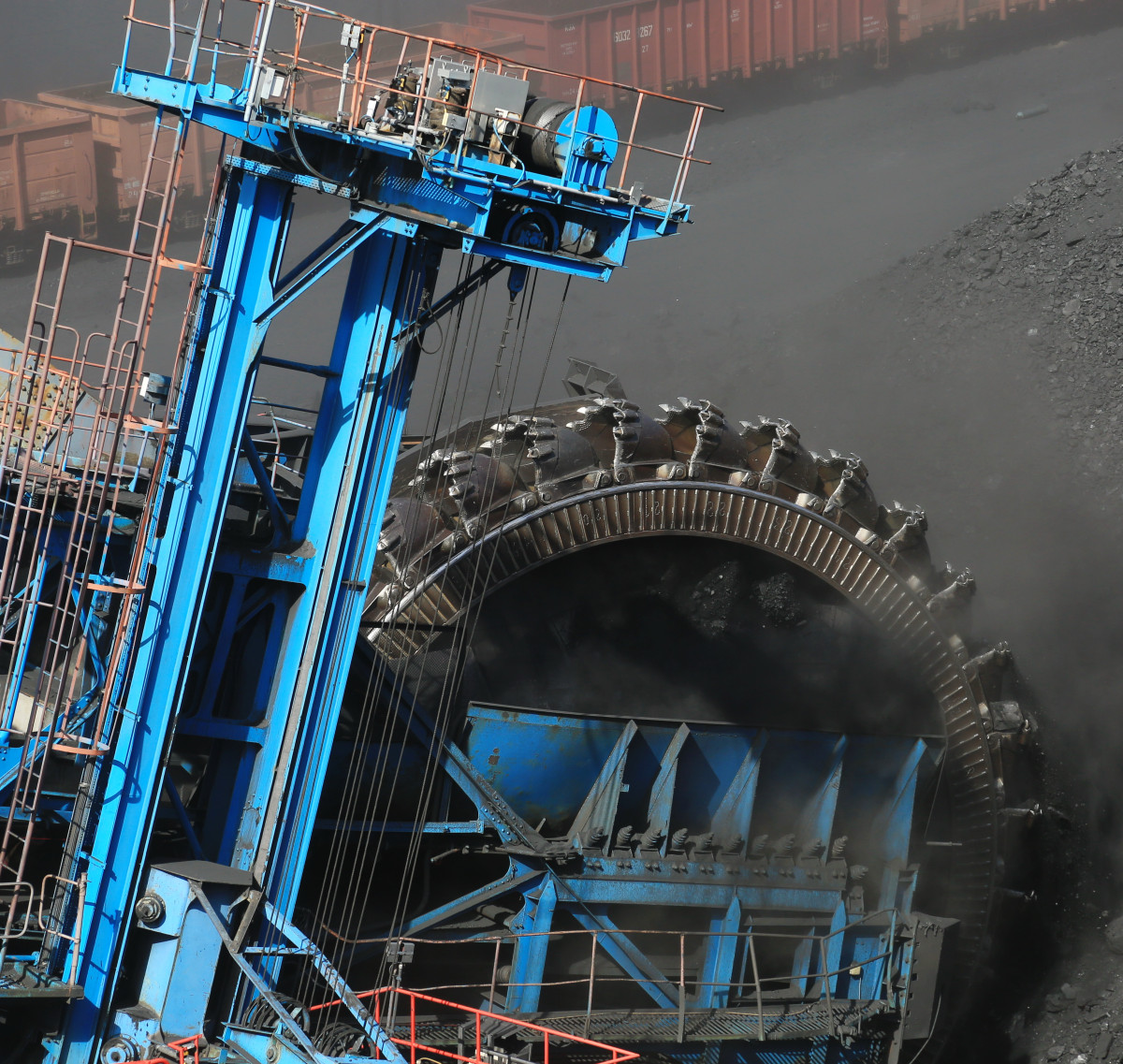 “Bogatyr Komir”, which includes the Bogatyr mine produces coal of the brand KSN with an average calorific value of 4,000 kilocalories per kilogram, its ash content is about 42 percent, and the content of moisture is less than 5 percent.

The company’s strategy is to ensure the smooth production of coal in the long term. At the current capacity of the company, the coal reserves will last for more than 70 years.

The area of coal-bearing strata of the Ekibastuz basin is 77 square miles. It is stretched from north-west to south-east for 12 miles, reaching six miles in width. The maximum depth of coal is in the range of 530 meters, and the overburden of the reservoir is from three to 670 meters. Total reserves of coal in the Ekibastuz basin equal to 10 billion tons. 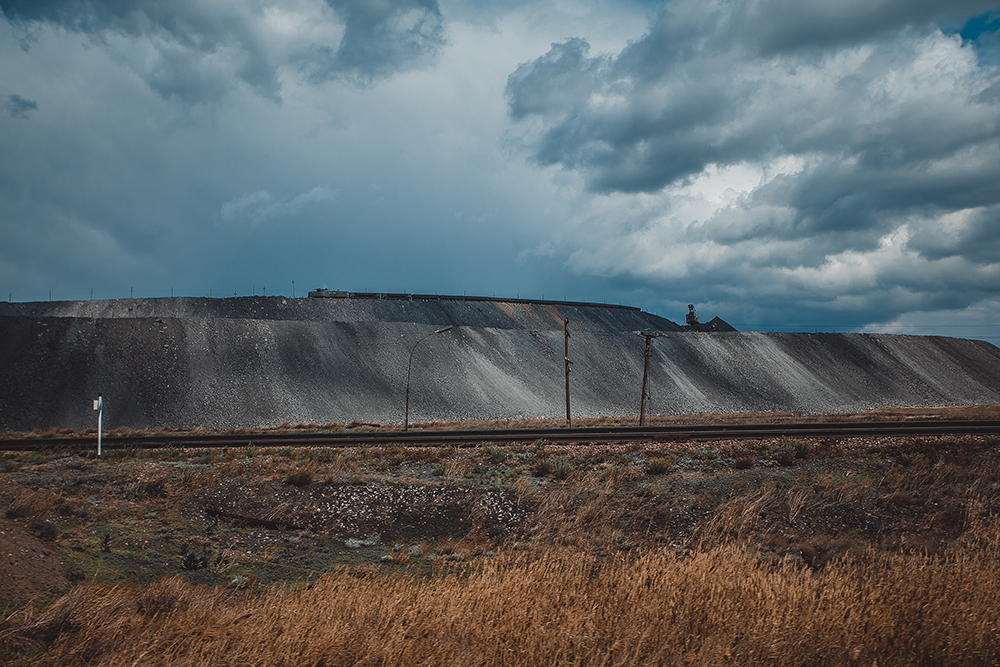 Favorable geological occurrence of coal seams in the edges of the mines of “Bogatyr” and “Severniy” allows to mine coal at the lowest operating cost. The average stripping ratio does not exceed seven-tenths cubic meters per ton of coal. 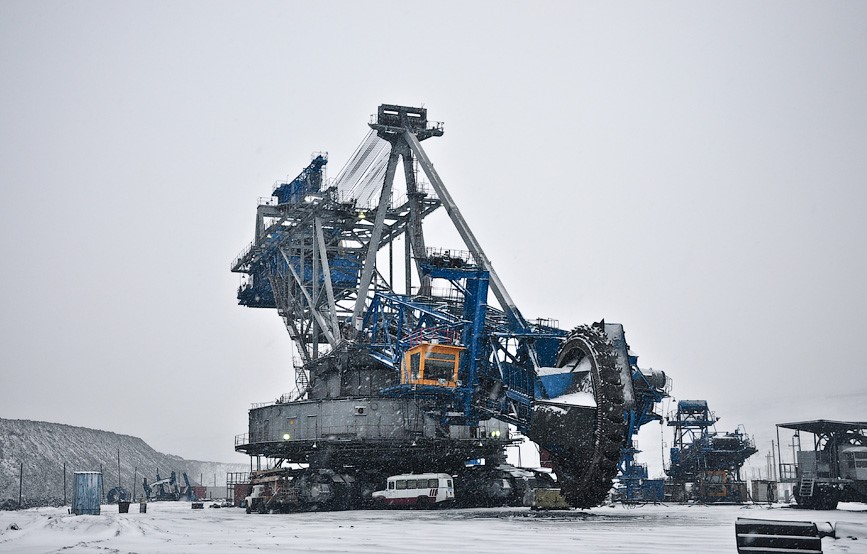 “Bogatyr coal” LLP is one of the largest enterprises in the world for the extraction of coal by open method, its balance reserves is 2.75 billion tons. Production capacity is 42 million tons of coal per year, including the section “Bogatyr” - 32 million tons, the mine “Severniy” - 10 million tons. The total number of the company’s staff currently stands at more than six thousand people.

The results of the work of the Company “Bogatyr Komir” in 2016 suggests that, despite the crisis phenomena in world economy and adverse market conditions, the company has achieved its objectives. It managed to maintain sustainable levels of production and sales, realizing 35.1 million tons of coal, which is higher than the level of 2015 of 3.4%. The company has managed to maintain its position as the most reliable and trusted provider of products for the power systems of Kazakhstan and the Russian Federation. All of this is the result of coordinated work of six thousand staffs of the Company. 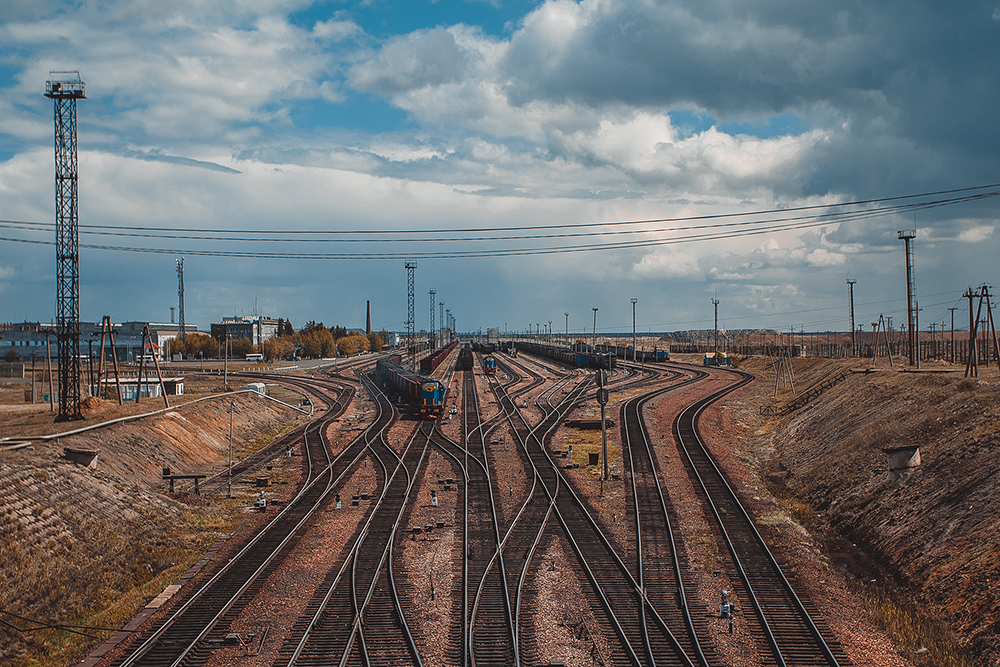 Future plans of “Bogatyr Komir” are associated primarily with large projects in the energy sector of Kazakhstan for the reconstruction and commissioning of new generating capacity at Ekibastuz HEPP-1, HEPP-2, Karagandinskaya CHP-3, the energy system of Astana, and also with the construction of the Balkhash thermal power plant and CHP plant in Taldykorgan.

Since the date of entry of the section into operation in November 2015 the Bogatyr has produced and shipped to customers half billion tons of coal. Such events involve the incision important guests, and are always accompanied large-scale events.