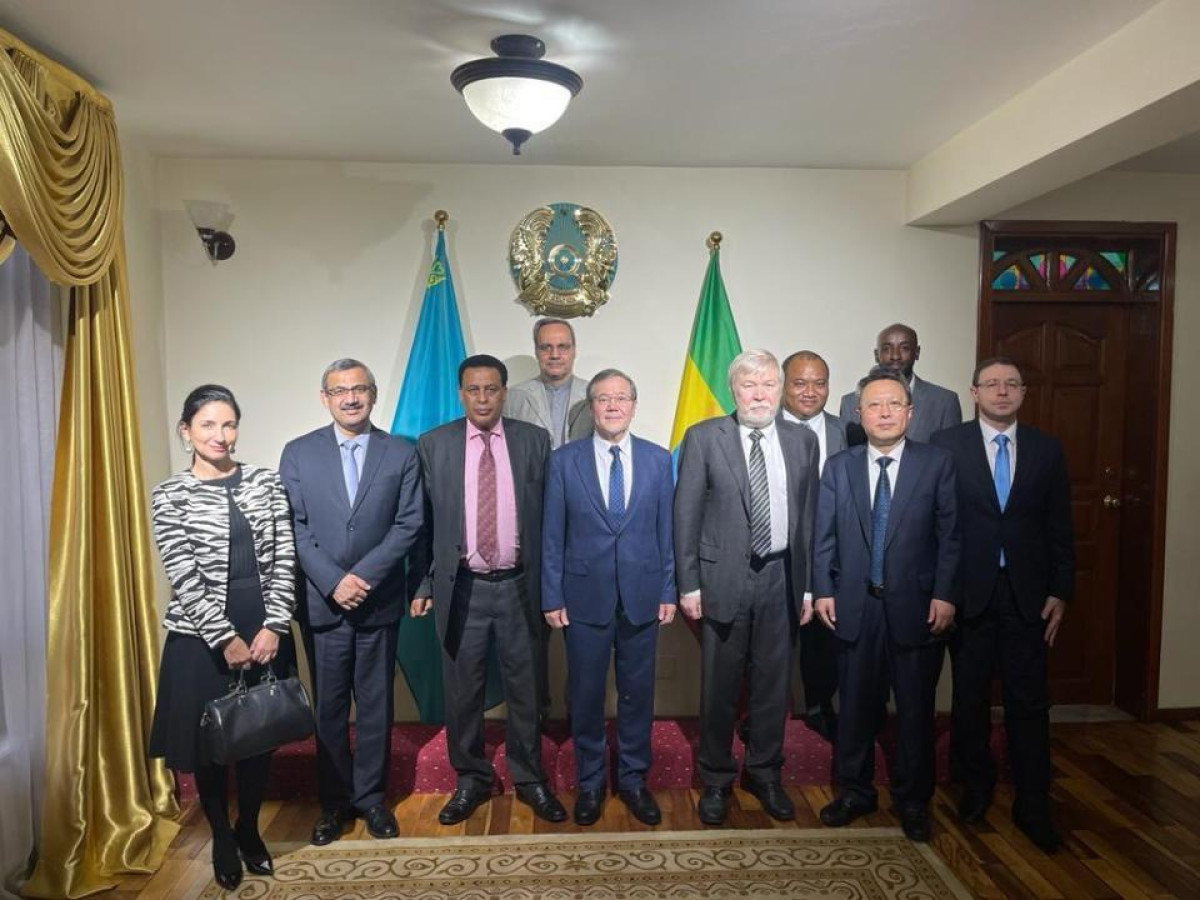 A Roundtable on Foreign Policy and Domestic Reforms in Kazakhstan was held at the Embassy of Kazakhstan in Ethiopia, El.kz cites MFA.

The event was attended by representatives of the Ethiopian Foreign Ministry, ambassadors of the SCO member countries, and experts from Ethiopian analytical centers, as well as media representatives.

Ambassador of Kazakhstan, Permanent Representative of Kazakhstan to the African Union Barlybay Sadykov acquainted the participants of the Round Table in detail with the main provisions of the Address of President Kassym-Jomart Tokayev dated September 1, 2022, including the construction of the New Kazakhstan spoke about the priorities in the foreign policy of our country.

In addition, the Ambassador dwelled in detail on the results of the 7th Congress of Leaders of World and Traditional Religions, held in Astana on September 14-15 this year, on the assessments of the participants of the Congress regarding Kazakhstan’s policy of interfaith harmony, on the contribution of our country to the construction of trusting relations, global dialogue, peace and security, as well as on Kazakhstan’s participation in the 77th session of the UN General Assembly in New York.

During the Round Table, the Official Representative of the Ministry of Foreign Affairs of Ethiopia, Ambassador Dina Mufti, noted the scale of the changes carried out by President Tokayev aimed at democratizing the political system of Kazakhstan, building a fair new state. He wished success in the implementation of all reforms, as well as in holding early presidential and parliamentary elections in Kazakhstan.

The editor-in-chief of the republican newspaper Ethiopian Herald, Worku Asfaw, stressed that Kazakhstan’s initiative to bring human civilizations closer together through interfaith dialogue is of great importance, since the division along cultural and religious lines poses a serious threat to stability around the world. In this regard, he especially appreciated the results of the VII Congress of Leaders of World and Traditional Religions in Astana, expressed in the Declaration of the Congress.

In addition, according to Asfaw, the deepening of parliamentarism and political pluralism, social and economic freedoms, noted in the Address of President Tokayev, open up good prospects for the younger generation of Kazakhstanis for an even happier future in their country.

The editor-in-chief of the newspaper Capital, Groum Abat drew attention to the fact that the political and economic reforms of President Tokayev are significant not only for Kazakhstan, but also for all countries of the Central Asian region. The most daring reforms, in his opinion, are the constitutional limitation of the presidential term to one seven-year term, as well as a number of economic initiatives to implement the new economic policy, in particular, aimed at reducing the excessive administrative burden on business and creating more comfortable conditions for entrepreneurial activity.

Abat also found parallels between Kazakhstan and Ethiopia in terms of the multi-ethnicity and multi-confessional nature of their societies. «In Ethiopia, more than 80 ethnic groups live in harmony. The same is true for Kazakhstan. The Congress of Leaders, held in Kazakhstan for almost two decades, has now acquired a global scale», - he said.

During the event, the participants also discussed important international events in Kazakhstan, such as the state visit of the President of the People's Republic of China Xi Jinping, the historic visit and Holy Mass of Pope Francis, as well as the participation of President Tokayev in the 22nd Summit of the heads of the SCO member states in Samarkand. In their opinion, the position of Kazakhstan, voiced at these events, testifies to the invariability of the principles of multi-vector foreign policy of the country.

In general, the participants of the round table highly appreciated the political and economic reforms carried out by President Tokayev, and showed great interest in further studying Kazakhstan's experience in modernizing the state system, as well as the policy of multi-vector in the current geopolitical realities.

Subscribe to our Telegram channel and be the first to know the news!
Next news
Kazakhstanis to take part in IV World Nomad Games
Photo day
Kazakhstan, Greece mark 30th anniversary of establishment of diplomatic relations