Third in the ring

The fact that the Kazakh land is rich in talented boxers in the same way as Brazilian soccer players is known to all.

The fact that the Kazakh land is rich in talented boxers in the same way as Brazilian soccer players is known to all. Meanwhile, the Kazakh judges of Boxing are also known in the world for such professional qualities as objectivity and impartial judging.

The judge of the international category AIBA with one star Yerbolat Ashimov told El.kz how to become judges of boxing matches in Kazakhstan, as well as about those who can claim this right. 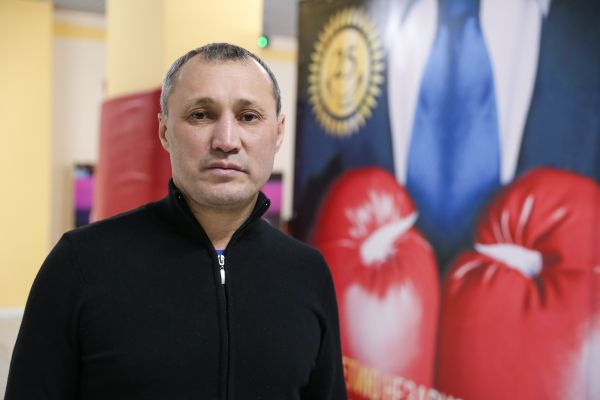 - Yerbolat, how did you come to such a specific class?

- I had done boxing for 5 years, and I am a candidate master of sports of the USSR in boxing, at the time I won tournaments and became the winner of the championship of Kazakhstan. When I gave up boxing, I was helping my second, now deceased coach, Alexander Anatolyevich Kochergin. That is when I started to judge my first competitions, including city level. Then I walked away from boxing for quite a long time, and came back only when my eldest son started doing boxing.

I always went with him to competitions and was in his corner, and my friends started to ask me to judge some battles, because they knew that I used to be very fond of this sport. First, I started as a side judge, and then I was a referee in the ring. Furthermore, I was offered to work as a judge in the youth championship of Kazakhstan on behalf of Astana, which at that time was held in Karaganda. After that I finally got involved in this business. Even then I was a judge of the 1 category, and collected documents on the national category.

By the way, I passed on it only when I had taken relevant seminars for judges of boxing, they are organized by the Kazakhstan Boxing Federation. In addition, to move to the next category, you need to take a special exam. The exam consists of the questions, and knowledge of specific terminology in English and physical standards. The next step was the participation as a judge at the Tournament of the people of Kazakhstan among adult boxers.

- Is there a school of judges in Kazakhstan?

- In Kazakhstan there is not complete specialized training for judges and referees of boxing. Therefore, anyone can become a judge under certain conditions. The main thing is not to be a color-blind, except you have to pass certain stages of preparation, and know provisions on judges. A judge does not necessarily have to be a former boxer, though, as a rule, all judges at the time were engaged in boxing. I personally know a female judge who has three stars of AIBA, however, she came to this not from boxing, but judo.

- How many judges, according to the rules of AIBA have to judge the match? Three?

- This happens only in the competition of small level. According to the rules of AIBA five judges outside the ring and one referee in the ring should be appointed to a fight. In particular, five judges are appointed to the fights of the championship of Kazakhstan. But often, there are not enough judges; therefore, it happens that they are limited to three. For a fight, judges should be appointed from other regions than the boxers’ regions. Regarding the judges levels, it should be noted that much depends on their human qualities. In fact, it so happens that the judge is pressured or asked by friends, in all situations it is important to remain impartial no matter what.

- Have you ever approached with such a request?

- Of course, more than once. However, you do not have to give in; otherwise you do not belong to this place. I always tell my very good friends that I will watch the fight very carefully. But, if your ward loses, you should not get offended. This is the main essence of the work of the referee.

- Tell us about the sensational or memorable match you have ever judged?

- The sensational? I do not know... I judged a lot of fights in the Championships of Kazakhstan, ranging from young men and women, and ending with the men, among who were Olympic Champions and prize-winners of competitions. There have been fights to judge involving Serik Sapiyev, Zhanibek Alimkhanuly, Birzhan Zhakipov and other famous boxers of Kazakhstan.

- How many fights, in total, did you have to judge?

- It is a difficult question. I participated as a judge in about 50 Championships of Kazakhstan, not to mention other tournaments. But only one championship on the national scale may have 50, and even 70 fights... Let me say that I judged only 20 fights, the figure, I think, will be very impressive.

- Do the judges of boxing have age limit? Up to what age can a judge carry out his work?

- It used to be. You could take up until the age of 50 in the international category, if I am not mistaken. Now it is not probably like this. As far as I know, it is not qualified even that time from what age you can start this work. For example, we have colleagues of 95 year of birth. While their peers are doing boxing in full in the ring, they have become judges. My opinion on the matter is a bit subjective, but I think that at such a young age it is simply impossible to trust in major tournaments such as national and zonal competitions. The man is banal may not have enough life experience. This is especially true for the referee in the ring.

If the referee is not qualified, the fight can end with a real tragedy. I witnessed a situation when one of the boxers became ill, and he lowered his hands. The referee in the ring apparently did not expect such a turn and could not orient in time. During this time, the second boxer sent the opponent in a difficult knockout, after which the loser got in a coma...

- Let us return to your persona. Do you plan in the future to move ahead on the path of a sports referee, or you have other plans? Tell us about your plans.

- As they say “a poor soldier who never wants to become a general”. We all set ourselves certain goals, and I am not an exception in this regard. Of course, my dream is to judge the Asian Championships, world Championships and certainly Olympic games. Dreaming about it, I realize that I need to do a great job. One of its components is proficiency in English at a good level. In fact, at major international tournaments all judges speak English.

Much also depends on the federations of Boxing. Those regions in which the Federation stands firmly on their feet financially, can afford to send their judges to international competitions abroad. One of these is the Federation of Boxing in Aktau. By the way, I will say that Kazakhstani judges considered to be one of the most professional and objective judges in the world. This is confirmed by the fact that in Kazakhstan there are 8 judges with three stars of AIBA, it is more than in Russia and in many other countries.

- Is being a judge of international category with three stars of AIBA the highest achievement?

- It used to be. Now it is not; before the Olympic Games in Rio new rules had been introduced, and judges with five stars of AIBA are appeared, of which there were only 7 people. Generally, being a judge can be very difficult because in this field the rules are constantly changing, although they are very much. For example, to stop the beating of one of the boxers, we had to say RSC (Referee stop contact), then these words had been changed to TKO (technical knockout), after a while the RSC was returned. Therefore, we usually take some seminars, studying and passing exams.

- We have touched on a very relevant and interesting topic of objectivity of refereeing in boxing. Perhaps the reason for this is the human factor, but in boxing a lot of judicial errors happen. What do you think it is necessary here to introduce a specialized instrument, similar to the video replay system that came to the aid of judges in football?

- In football, everything is clear, it is a goal or not. In boxing it is a little bit complicated, it is a subjective sport. Meanwhile, we carry out strict control for errors we can be quitted from judging for a certain period or a lifetime suspension. Let us take an example of the fight of Levit against Tishchenko in the final of the Olympics-2016, our Federation would suspend from work for life, and furthermore the entire referee team.

- In our work, there is such an official, as the supervisor of the competition, who according to the results gives the mark to each judge. In addition, the Kazakh judges are good enough and have the opportunity of career advancement. Why to put it all on the line? Personally, I do not see the point.

- Thank you for the interview!