A national dress of any people fulfills not only a practical function, but also reflects the way of life and culture. A Kazakh national outfit is multifaceted and consists of many elements. Both male`s and female`s wardrobes are distinguished by their practicality, functionality and environmental friendliness. The Kazakh national dress has absorbed all the best things that the art and talent of folk craftsmen have been able to create over the centuries.

In the ancient times, it was possible to determine the status of a person by the clothes and manner of wearing, belonging to the particular estate and class. Many types of ancient national clothes have been preserved in the modern wardrobe of Kazakhs. Some things have changed and became more practical. The ancient traditions associated with ethno-historical and social characteristics have been maintained in Kazakh national dress. It is subdivided into headdress – hats, dress up – clothes worn on the shoulders, belt clothing – clothes worn on the hips, and even shoes as well. Also, the clothes are subdivided by intended use (for the celebrations, horseback riding and everyday wear) and by season too.

There is a Kazakh proverb, saying “A friend looks at the face, an enemy at the feet”. And it is definitely true that the Kazakhs have given a special place to the national headdress at all times. The male`s national headdresses include tyubeteyka (embroidered skullcap worn in Central Asia, an easy headdress), fur cap (a winter warm hat made of genuine leather from fur animals), fountain (an elegant headdress for the celebrations).

The national female`s outfits are distinguished by brightness of color and more feminine cut. A women's outerwear is lavishly adorned with precious stones, fur and decorative elements. A distinctive feature of the Kazakh women's dress is flared by the sleeves, the edges are complemented with recesses from handmade lace.

Kazakh National Academy of Arts named after Temirbek Zhurgenov, a place where they not only train highly qualified creative staff, but also conduct in-depth the studies of the history of a national culture. Apart from the perspective of researching the music, national song traditions, oral folk art, and an academy explores the traditions of Kazakh national costumes as well.

In order to investigate the national Kazakh costumes and determine their significance for the Nauryz holiday, we have decided to interview an art critic, culturologist, the Senior Lecturer of Kazakh National Academy of Arts named after Temirbek Zhurgenov, Leila Abdiganikyzy Kenzhebayeva. 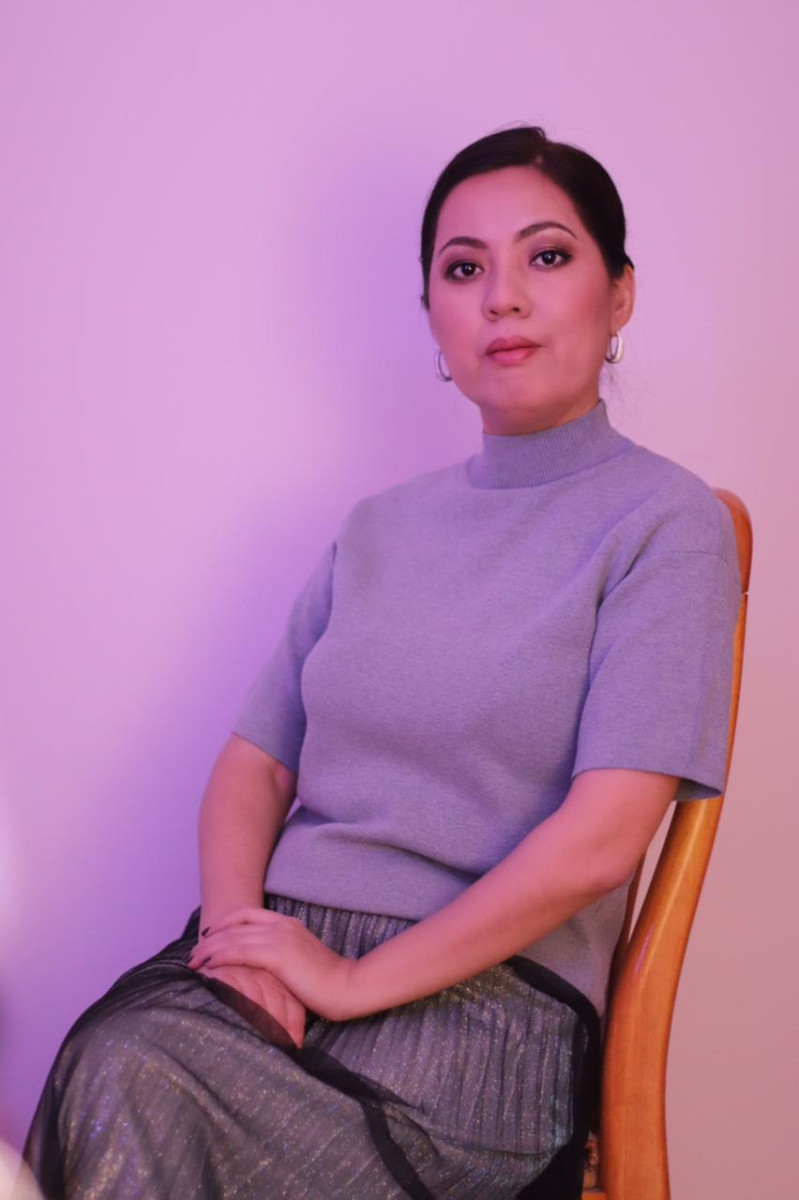 – As you know, the Kazakh national costumes are diverse and consist of many elements. In general, how do you think, how does the national costume reflect the life and culture of our people?

– Kazakh national costumes are the treasure of our history, that has been developing and evolving for many centuries. From an immemorial time until the present day, we have not only the best examples of handicrafts, but we also have the clothes that are still in use due to their beauty and comfort. In the ancient times, the national costumes were made depending on the origin, place in society and age of the owner. There is no doubt that the climatic conditions are also taken into account. Kazakhs have inner, outer, wet, one-piece, decorative and some ceremonial clothes. Their ornaments are a unique manifestation of the philosophical knowledge and thinking of our people. The classical works of art, model of culture that reflect the national identity. This is evidenced by the samples of clothes stored in museum`s collections of the country.

– Each nation has its own culture and spiritual values. Since the ancient times, a tradition of celebrating Nauryz has existed in the way of life of many peoples of the world. Nauryz is not a religious holiday. It is a holiday to get out of the winter, to be in the sun and to celebrate the New Year. It was actually considered to be the equinox.

According to the official data, the celebration of Nauryz has been banned under the influence of the totalitarian system since 1926. A holiday, that has been forgotten for many years, has been revived since 1988, and the tradition of celebrating Nauryz has continued as well.

When it comes to the national costumes, many people say, “The most beautiful clothes are the clothes of your nation”. The artistic patterns of Kazakh clothes, both in style and quality, amaze the country. Nowadays, it is important for the nation and generation to explore and restore the types of our national costumes simultaneously. However, I would not refuse to wear the modern national costumes, that are fashionable and comfortable! 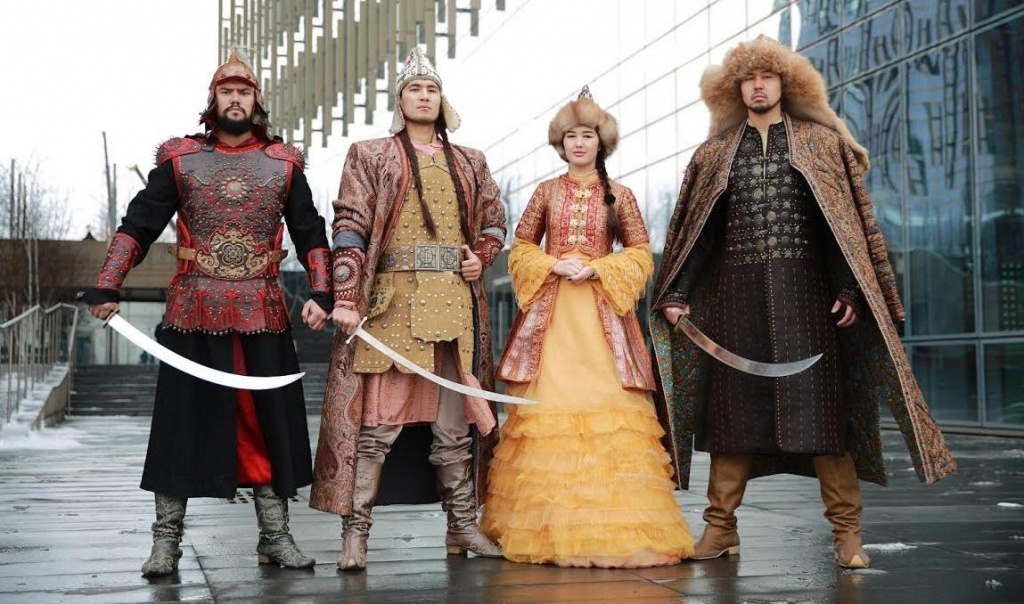 – According to the age, there are many special types of national costumes. The main thing is to be suitable for your age, appearance, style and comfort. It is also important to pay attention for the quality. There are some special models of clothes, provided for the girls and women's clothes. Its educational value is also deep.

It should be noted that the Kazakh people paid a lot of attention to the decoration of national costumes. They have selected the right thing for each pattern. For example, the ornaments found on the hats are not worn on the outerwear or boots. There are some reasons for this. The so-called “Dog tail” pattern has never been used on hats. Underlying this is the myth that the enemy should never rise to the top. This pattern is placed on the slit side of men's pants.

– What kind of traditions, customs and distinguishing features do you know, relating to the national costumes?

– Our people have a lot of customs, features and rituals related to clothing. In particular, the rituals such as not throwing the hats on the ground, “Wearing a chapan” (Kazakh quilted dressing gown) at weddings, and “Teberik” from one's clothes at the time of death are still used as well. There is also a revived Kazakh tradition of “Shargy salu”. A bride presents the scarf to her younger sister with the intention and desire, “So, now it's your turn, find your happiness”.

– In general, what do you think about the difference between male`s and female`s national costumes?

– Clothing is not just a sheet of fabric. It is a wonderful world that reflects the face of a certain nation and culture. It has an aesthetic, ethno-cultural and social significance. A female`s clothing differs from male`s clothing in shape and design. The gemstones and semi-precious stones are widely used in female`s national costumes. The male`s clothes are cut and sewn, so that they fit snugly. The ornaments on them also had a special meaning. The most common men's clothing is a long-sleeved сhapan with long and wide sleeves. The outer pants are made from the cotton or wool. These leather trousers are decorated with silk and embroidery. An integral part of national costumes is complemented by silver jewelry. 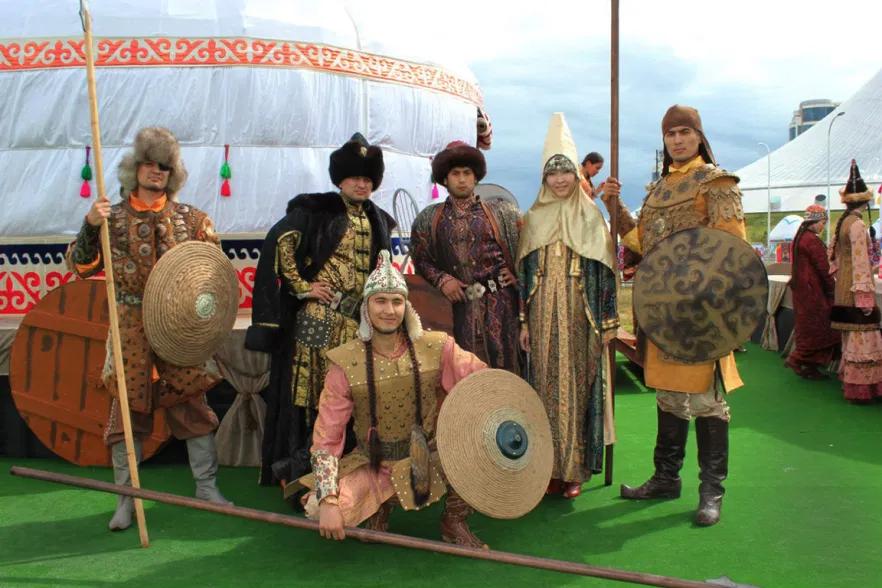 – What difficulties do art critics and scientists face when collecting information about the national costumes?

– A valuable information on Kazakh national costumes is published in a foreign language. Their translation requires the help of specialists. There are ancient Chinese inscriptions that also contain rare information. A fund of the Hermitage in Russia contains the valuable specimens of our national identity, including the rarest species of saukele. At the same time, many documents of research expeditions of the Russian scientists to Kazakhstan remain secret. A well-known ethnographer, scientist Alkey Margulan spoke about these studies in his work. There is still a long history of our national costumes. In order to do this, it is necessary to undertake the funded research projects specially.

– I am still exploring the history of our national costumes. My research topic is related to the types of ornaments on female`s clothing.

The national ornaments are not just for art. Underneath, it is the life and beliefs of an entire nation. This art is born with the essence of our people. For example, the girls often wear floral or winged swallows on their hats and dresses. It is a wish to flourish and grow like a bird. The boy's clothing was often decorated with spearheads, eagles, and ram's horns. So far, I publish my research works on national costumes in my scientific articles. I plan to publish a textbook in the future.

– What work has already been done by the National Academy of Arts named after Temirbek Zhurgenov in the investigation of national costumes?

– Today we know Zhumagaliyev Muslim Sadykuly, as the founder of the theater of national traditions “Arlan Zhete”, an honored worker of arts of the Republic of Kazakhstan, the Senior Lecturer of KazNAA named after Temirbek Zhurgenov.

A famous fashion designer is one of the founders of the “Ethno” style of Kazakh national costumes. Her fashion collections have performed along with the collections of world fashion masters such as Pierre Cardin, Ted Lapidus, Vyacheslav Zaitsev. In addition, the students of the National Academy of Arts named after Temirbek Zhurgenov, majoring in “Clothing Design” are pleased with their achievements as well.

– In general, at what level should the study of national costumes be conducted in modern society?

– We must not lose the values of traditional art, so that the nation is not disabled spiritually. It is an obvious fact that all branches of art have been given the freedom to flourish since independence. There is also an increase in the number of modern Kazakh clothes. Art critics also began to pay attention to the study of the history of our national costume art in the new period. This is actually a good thing! It is necessary to conduct scientific expeditions in order to study a modern history of the regions of Kazakhstan. It should be provided with the necessary financial support too.

– According to some experts, the national clothes can be turned into everyday`s necessities. Do you agree with this opinion?

– A taste of Kazakh women in clothing has changed dramatically in recent years. Brides have chosen the national costumes, especially for their weddings. Due to the tiredness of Western fashion, the demand for unique handmade clothes has increased over the years. Even the world-famous brands of clothes can be seen in the oriental style. I hope that there will be a lot of consumers, if we produce the affordable types of national clothes that are suitable for everyday`s life. I think, it is necessary to create a modern Kazakh brand that can reveal the essence of the nation!

– Thank you so much for your time and interview! We wish you a continuous success and prosperity in your job!

(Pictures were taken from the personal archive of culturologist)