The origins of beauty

Our country has rich national musical heritage. The great composers’ kuis (instrumental musical compositions) of Kazakh steppes have been preserved century after century, which people were carefully keeping, passing from mouth to mouth, from generation to generation. To this day, we honor that cultural wealth, given us by the great kuishis (Kazakh composers) of different times.

Each work of art created by akyns (poets), has its own history. We are offering to your attention the history of the creation of the legendary songs of famous Kazakh composers of different centuries.

There are several versions of the history of kui “Adai”. The official one is considered to be described in the book “Strings of centuries” by an academician Ahmet Zhubanov.

Once the aged of the clan Adai met a wandering traveler at their tent and by the laws of hospitality they invited him in to have a rest and to have some fresh meat and cool kumys. The traveler entered the tent. His eyes immediately caught the dombra. The owner of the tool, judging by the decoration of owl feathers, was a girl. 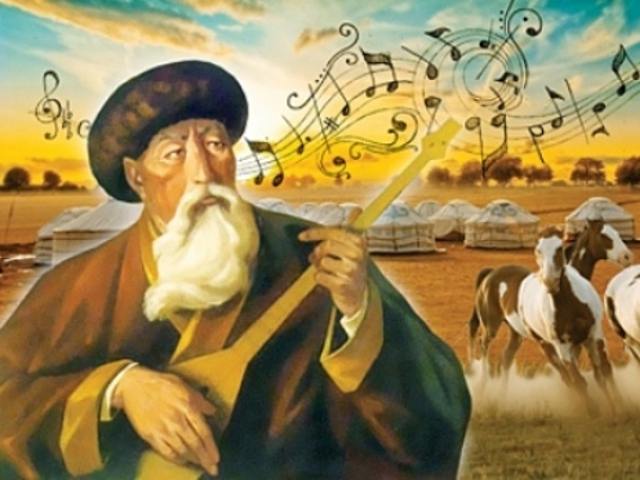 While the hostess was preparing the meal, the stranger inconspicuously took the dombra and began to tune it in his own way. Having heard that someone entered the tent, the man hurried to put the instrument back. A girl 17 years old in appearance came into the tent, picked up her dombra and began to deftly touch the strings, producing a pleasant melody. After finishing her playing music, Akmandai (that was her name) noticed with indignation that someone had taken her instrument and told others. It became clear that the guest, sitting in the place of honor, had touched the dombra. Then she tuned the instrument in her own way and played one of her favorite compositions.

When Akmandai finished, the traveler said: “My dear, what you have played is not worth a row of pins!” Then he took the dombra and in the air beautiful music immediately spread in a virtuoso performance of the master. The hosts looked at each other and realized that they had an unusual wanderer in their tent. No one could play the dombra like him in their district and far beyond it. When the stranger finished his kui, the owner immediately asked if he was Kurmangazy from Kyzylkurt clan. The man replied in the affirmative form. Kurmangazy’s ability struck all the present people, and especially Akmandai. Flattered at the attention, Kurmangazy devoted her the kui, popularly called “Adai”. It is worth noting that on that day in the hospitable yurt the composer played one of his best works – “Serper”. 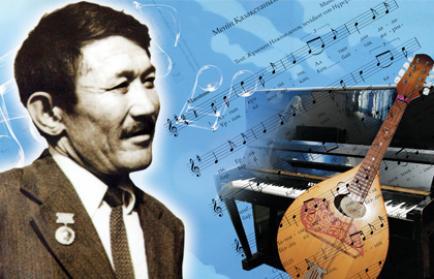 This truly national song by a composer Shamshi Kaldayakov is well-known in our country. After all, in 2011 it was elevated to the rank of the anthem of Kazakhstan. The history of the composition originated in 1956. Then a little-known composer Shamshi Kaldayakov decided to create a Patriotic tune. He asked a friend of him, a student Zhumeken Nazhimedenov to write lyrics to his music and a singer Zhamal Omarova to sing in her vigorous style.

Then people heard the song “Menin Kazakhstanym” on the radio for the first time. It was heard and loved from the first to the last note. In that period it was played everywhere. But once workers of the party noticed that this song, having already become popular, had not a word about “native Communist party” and “the seven-year plan”. In order not to take out the song from a rotation, it was immediately added another verse:

The seven-year plan will overcome the seven summits,

The initiated celebration of Kazakh youth.

Now no one remembers this verse.

Then the young Kaldayakov could not think that this composition, popularly called “the march of the virgin lands”, after more than half a century, would not only fade, but would become the anthem of Kazakhstan. 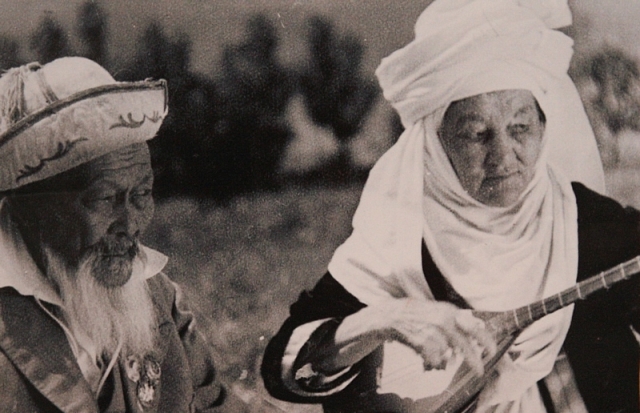 The kui “16th year”, which was composed by a composer and a pupil of Kurmangazy, Dina Nurpeisova, has its own sad prehistory.

In 1916 on rear of work by the Tsarist government decided to mobilize men aged from 18 to 43 years living in the Kazakh land. Kazakh people were not satisfied with this decree itself and riots broke out. People spurred dissatisfaction with the fact that men of noble birth, the sons of the rich, biys and chairmen, avoided the decree.

In order to protect their children, the rich sent the poor, covering them with their names. Moreover, these recruits were not fitted for such work either by age or by marital status. This decree did not spare Dina Nurpeisova’s family. Her son Zhurunbai was also mobilized. This prompted the composer to write her famous kui, which she called translated into Russian “Nabor” (Set). But people call another name – “16th year”. 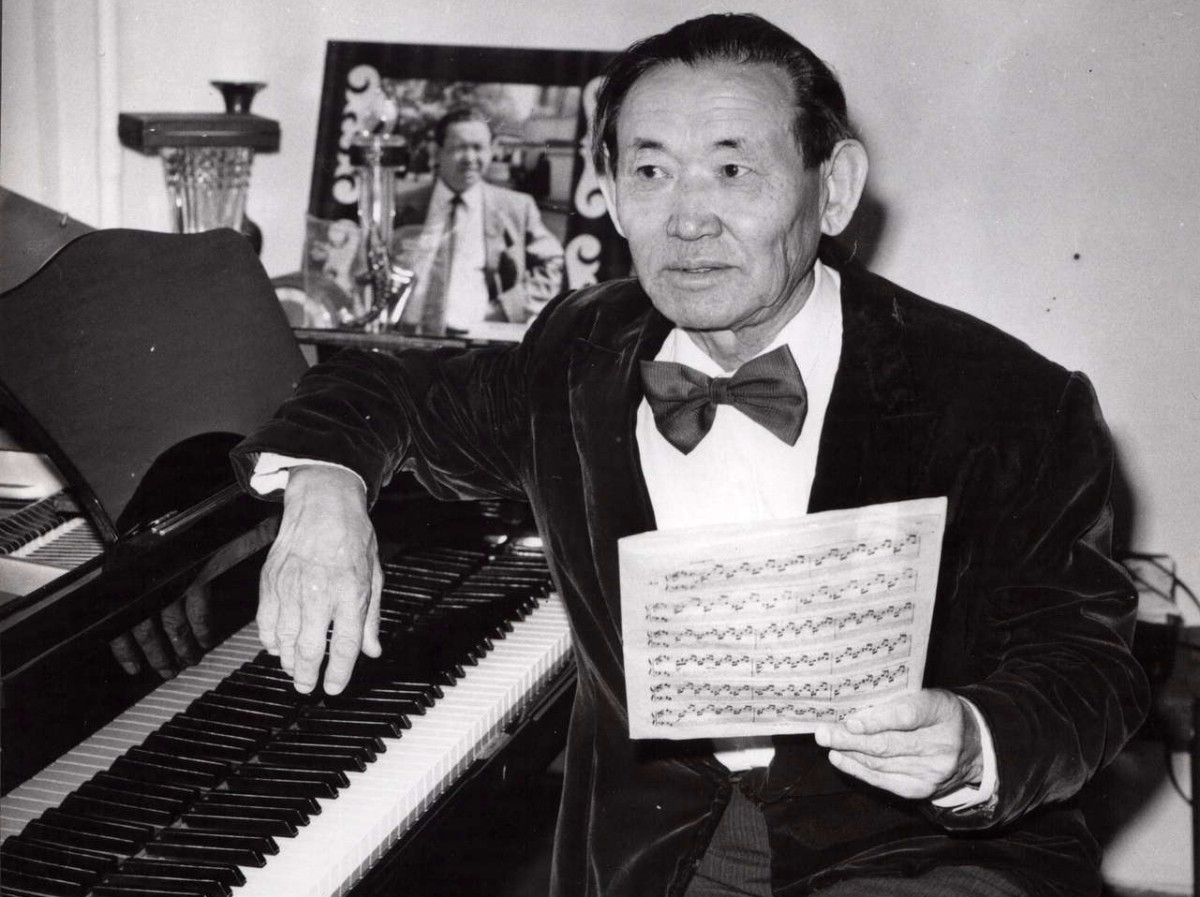 This Kazakh folk composer, teacher, conductor was very fruitful. In his life he wrote more than five hundred works. None of them was a failure and reflected in the hearts of grateful listeners. If a melody was born in his mind, then he gave up everything, until he put it in notes. For example, inspiration to write one of his most famous orchestral compositions – “Alkissa”, came during the night.

Having finished, he woke his wife up to share the joy that he composed a masterpiece. Outraged, Dariga decided to listen to what her husband wrote during the night. But when Nurgisa finished playing his kui, Dariga was inspired and her eyes were in tears.

Another melody to the famous song “Kustar ani” (The song of birds) Nurgisa Tlendiev wrote after a walk in the park. There he saw a picture of a flock of crows attacked a small sparrow. The sparrow was trying to escape from the flock. But those did not stop pecking at it. Having arrived home, the composer, with tears in his eyes told about what he had seen and added that sometimes people behave like those birds. After that he wrote the music which later became the masterpiece of Kazakh music.