The huge inhabitants of a small town

Ekibastuz cannot boast some beautiful old architectural buildings, modern spaces for a family holiday. And the nature here is not rich enough to attract tourists. No rivers, no forests, no mountains. This is a young industrial city in the steppe. The main attractions are the giant coal-extracting and energy enterprises.

But a few years ago in the streets of Ekibastuz the inhabitants of hot Savannah and the wild jungle, which are not absolutely appropriate for this region, began to appear. Animals of the concrete decorated the territory of small and medium businesses, vacation spots of townspeople. But the people had no idea who the author of these works was. Today, Gamal Sagidenov is well-known. 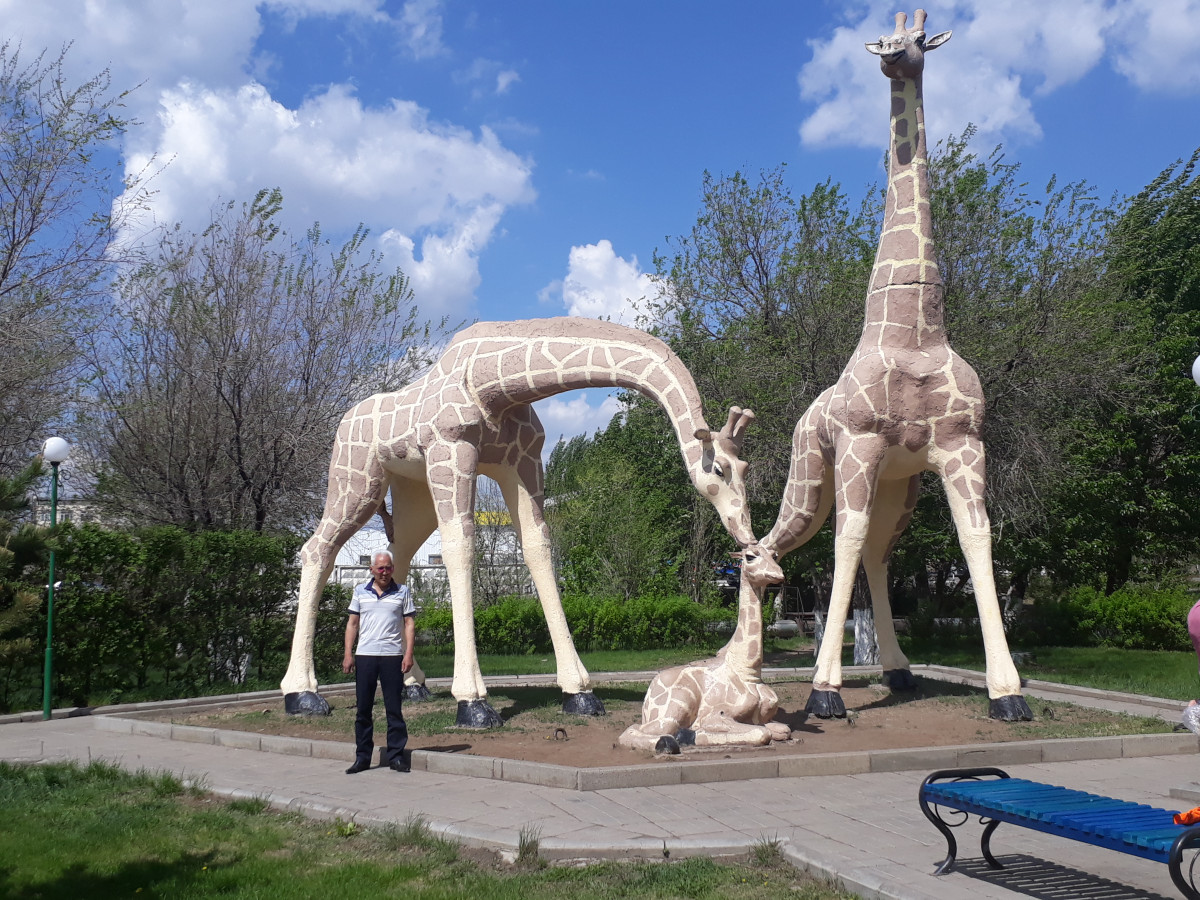 The inhabitant of the paradise garden

The first resonance among the local population was made by the sculpture of Eve near the cafe “Edem”. In place with the Paradise title should be its occupants, decided cafe owner and sculptor. And so they did.

- What a shame! - exclaimed the passers-by grandmothers. – Are not you ashamed?! The kids are watching!

And men turned their neck, passing by a slim girl with a rounded, curvaceous figure and frankly admired, provoking the jealousy of their companions. After a while the indignation of the older generation did not cease. The decision to remake Eve more modest was made. 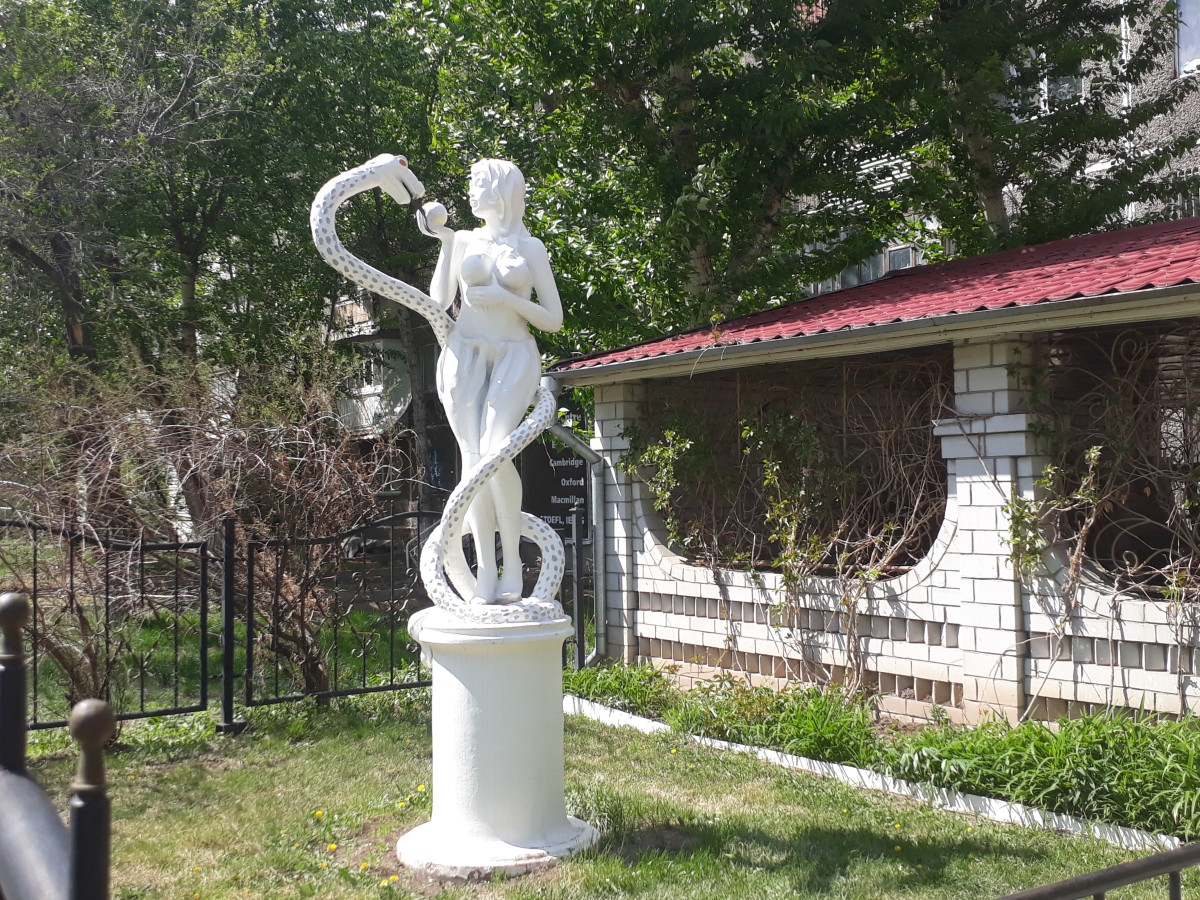 The curvaceous figure is now encircled by the serpent, offering the “sinner” the forbidden fruit. Reptile just covers that caused a storm of indignation of the older generation and delight of the strong half of the population of Ekibastuz.

Guests from the jungle

A huge tiger guards one of the items on the maintenance vehicles in the nineteenth district of the city. The representative of cat family is depicted on the company logo. That is why the owner decided to put this animal in the territory of his object. The sculpture is stained annually. Neither rain, nor wind, nor heat terrifies it. A few years later, the monument remains intact and engages the photo shoots of residents of the city where it is a big rarity to see a real tiger. 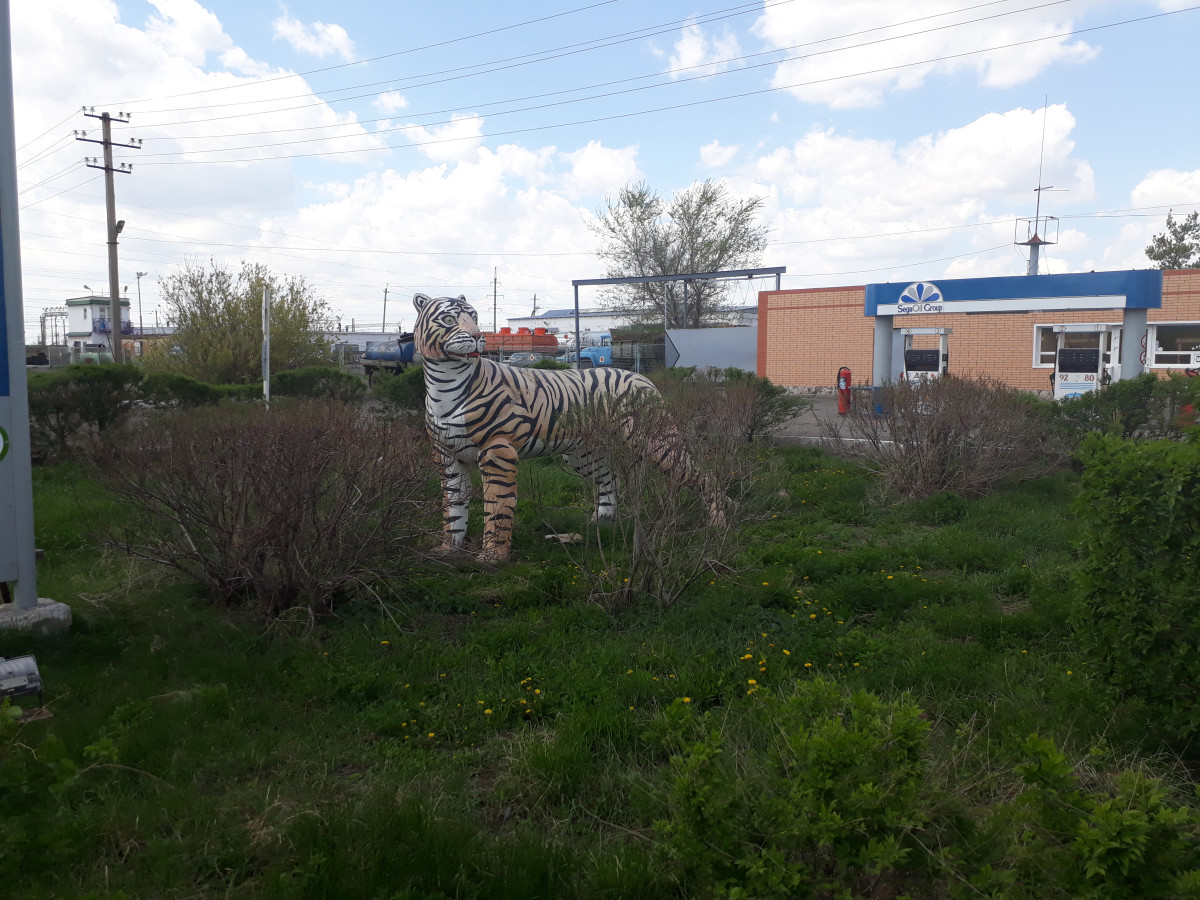 In Ekibastuz there is no zoo. And touring zoos rarely bring such large animals. Therefore, the concrete striped beast is a good alternative for visual aids. Some even manage to be photographed riding on it.

Close to the tiger in the twentieth district on-site of the leisure complex, there are a few sculptures by Gamal Sagidenov. The grey wolf, the playing dolphin, the huge scorpion, the kalibri, the seal on the ball, the pigeon and the cobra are not only decorative elements, but also perform the function of the lights. 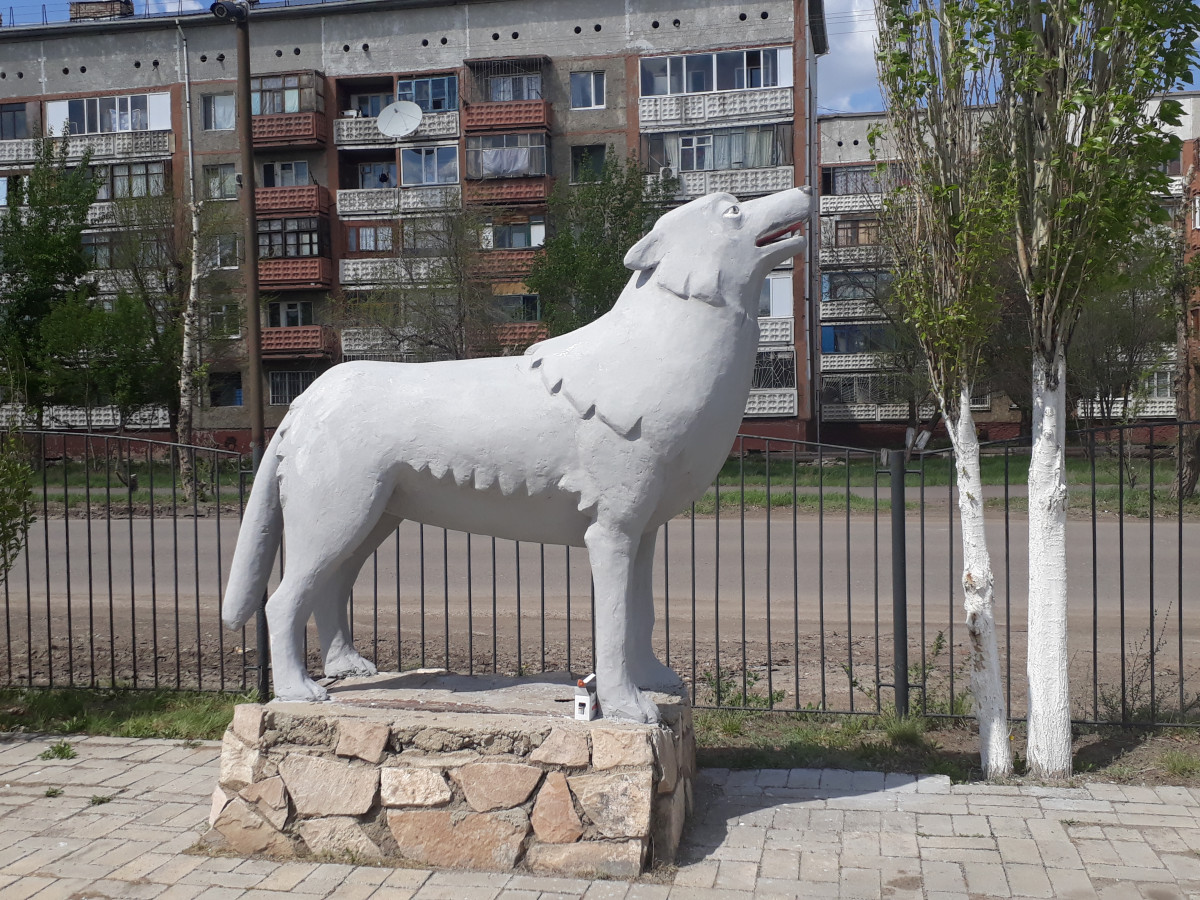 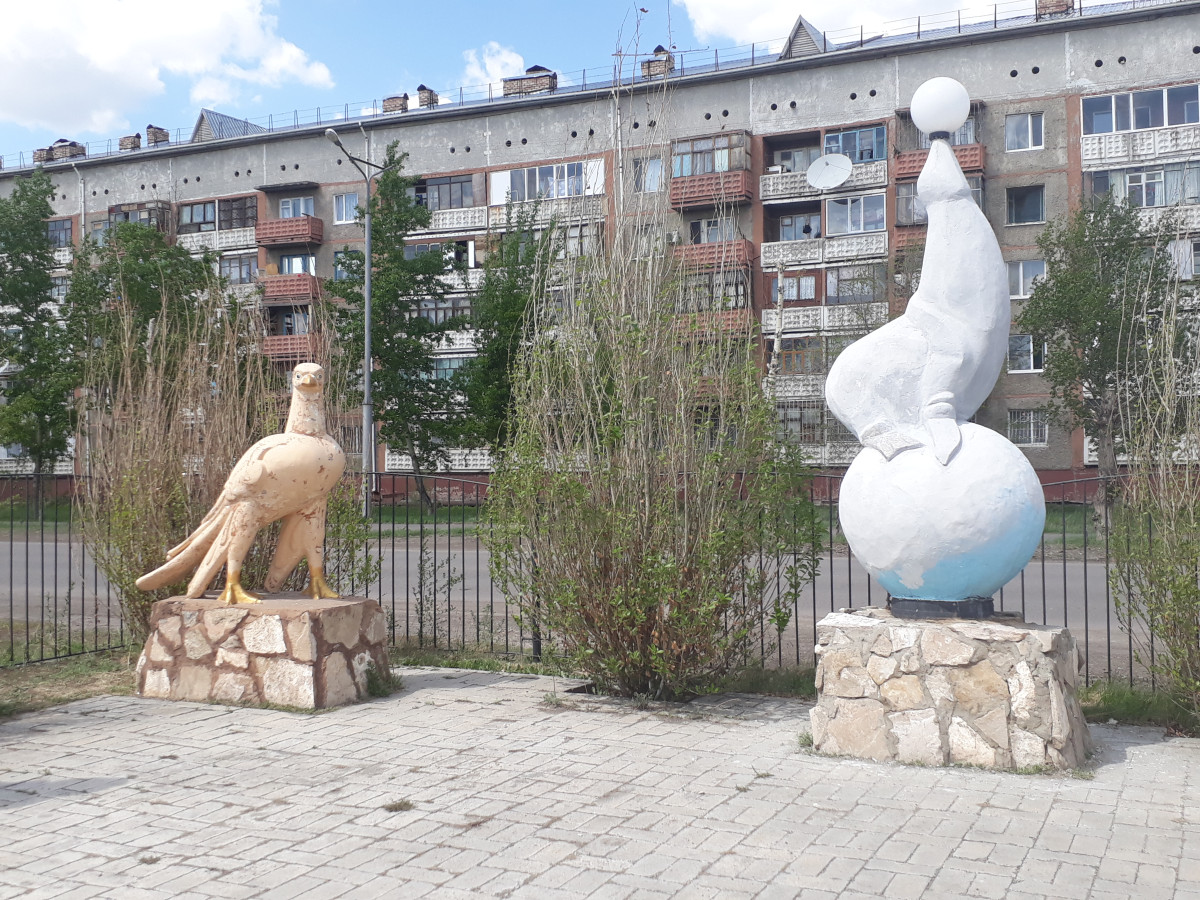 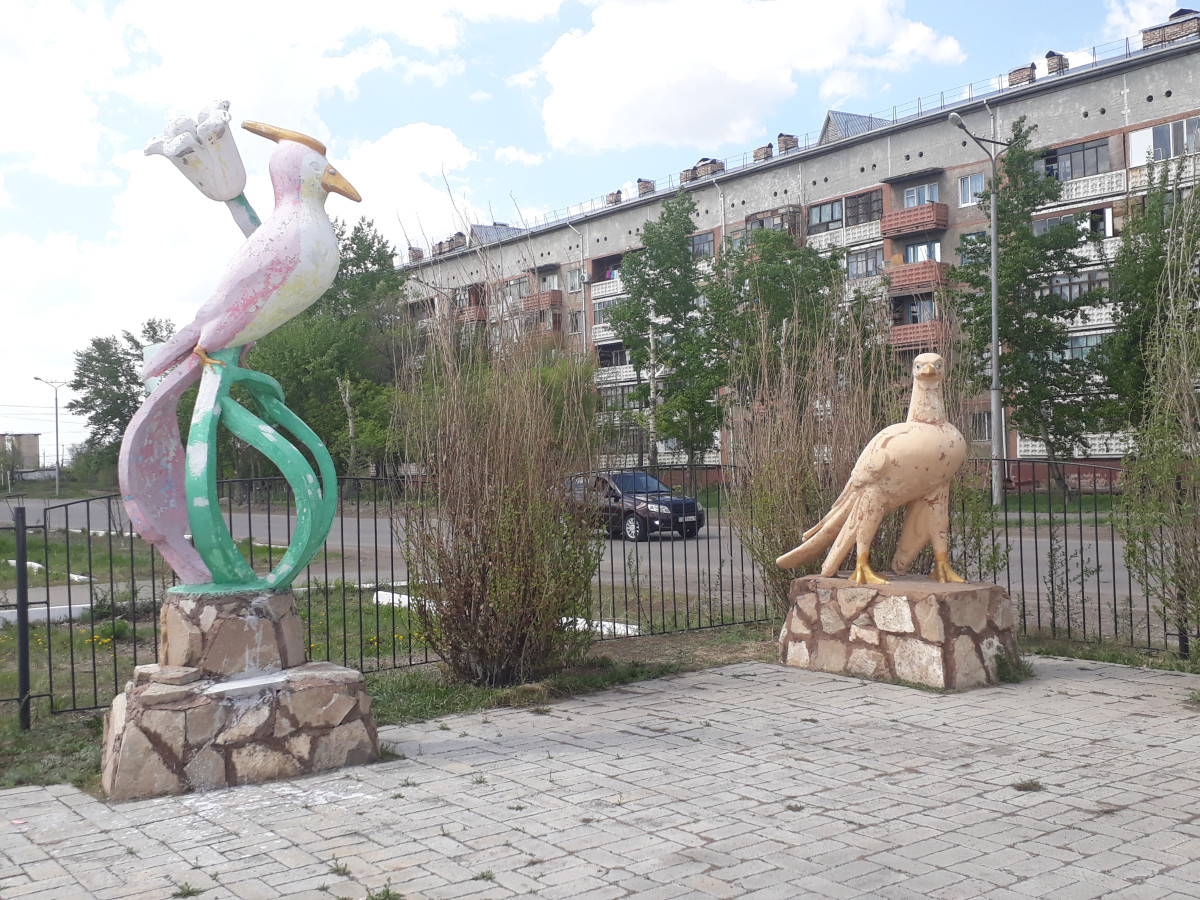 The electricity was installed into the concrete sculptures of fauna and they light up the courtyard of the complex in the dark. There is a yurt too, which is guarded by two mighty warriors. It is also the work by Sagidenov. 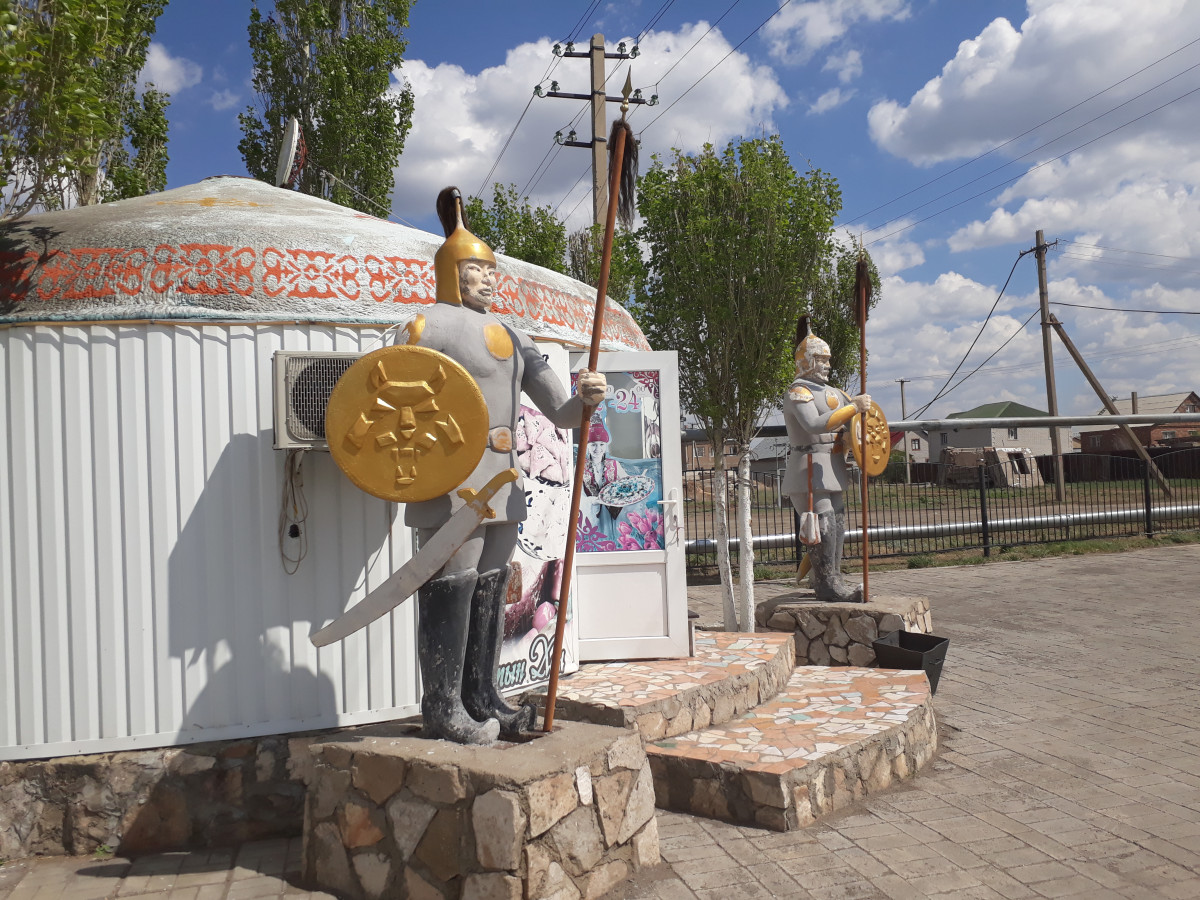 - They have just come back from the battle. You see, all have wounds, - jokes the owner of the complex. In fact, the sculptures are needed to touch up each year, because they are under the sun and the paint is fading.

There is also another work of the master in the room. Two-meter mermaid with a dagger welcomes visitors to the sauna at the entrance. Half woman-half fish gives the impression of immersion into the underwater world and gives the interior its originality. 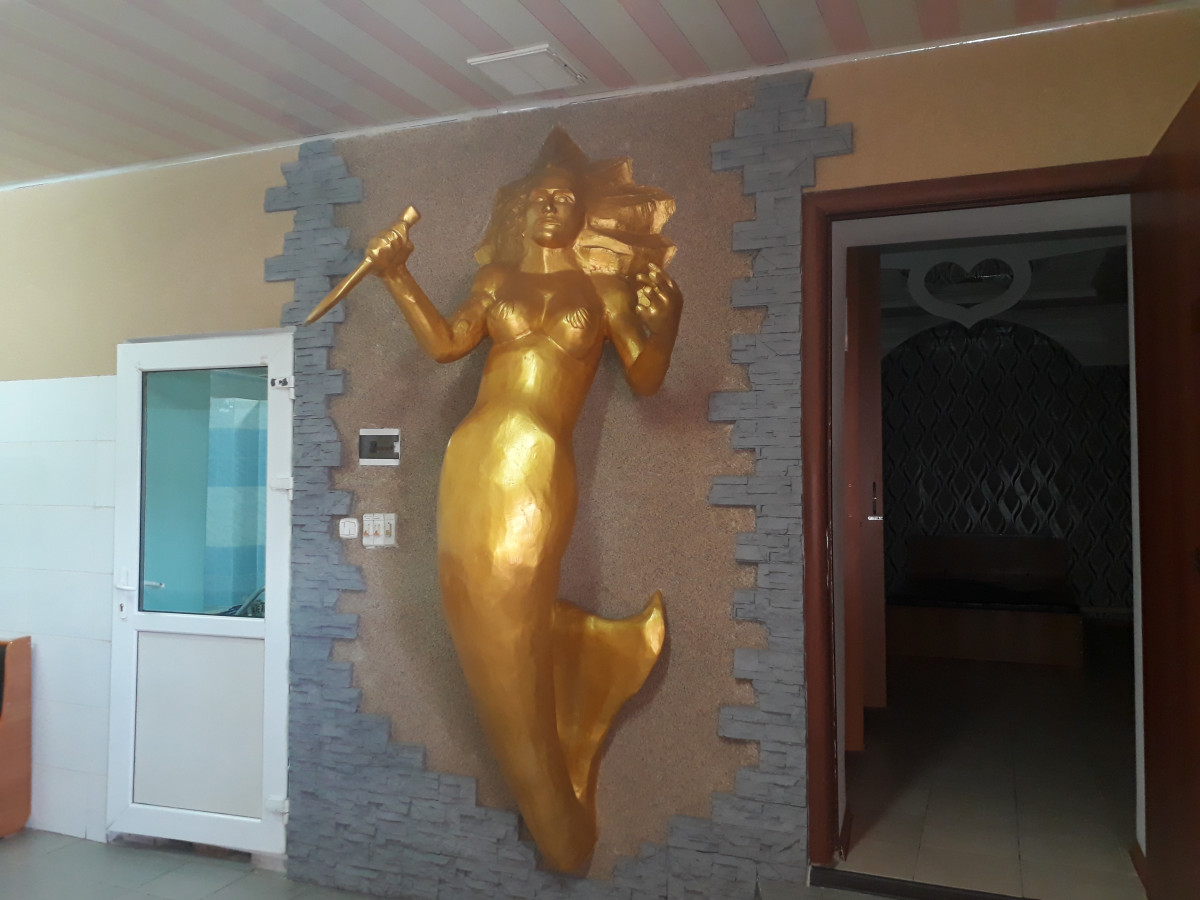 Eight-meter giraffes are towering closer to the city center in a vacant lot near the bus stop “Parkovaya zona”. Three inhabitants of Savannah are depicted in the form of “mom”, “dad” and “baby”. Resting animals are located near the artificial waterfall. There are not tall trees around the sculpture, so giraffes can be clearly seen from afar.

The special giraffes cause admiration of children. The local kids often try to ride the tall concrete representative of the family. But all attempts were in vain. Therefore, parents have nothing to worry about. Children cannot climb on them and fall from a height. But it is quite possible to ride the smallest giraffe, and moreover, safely. 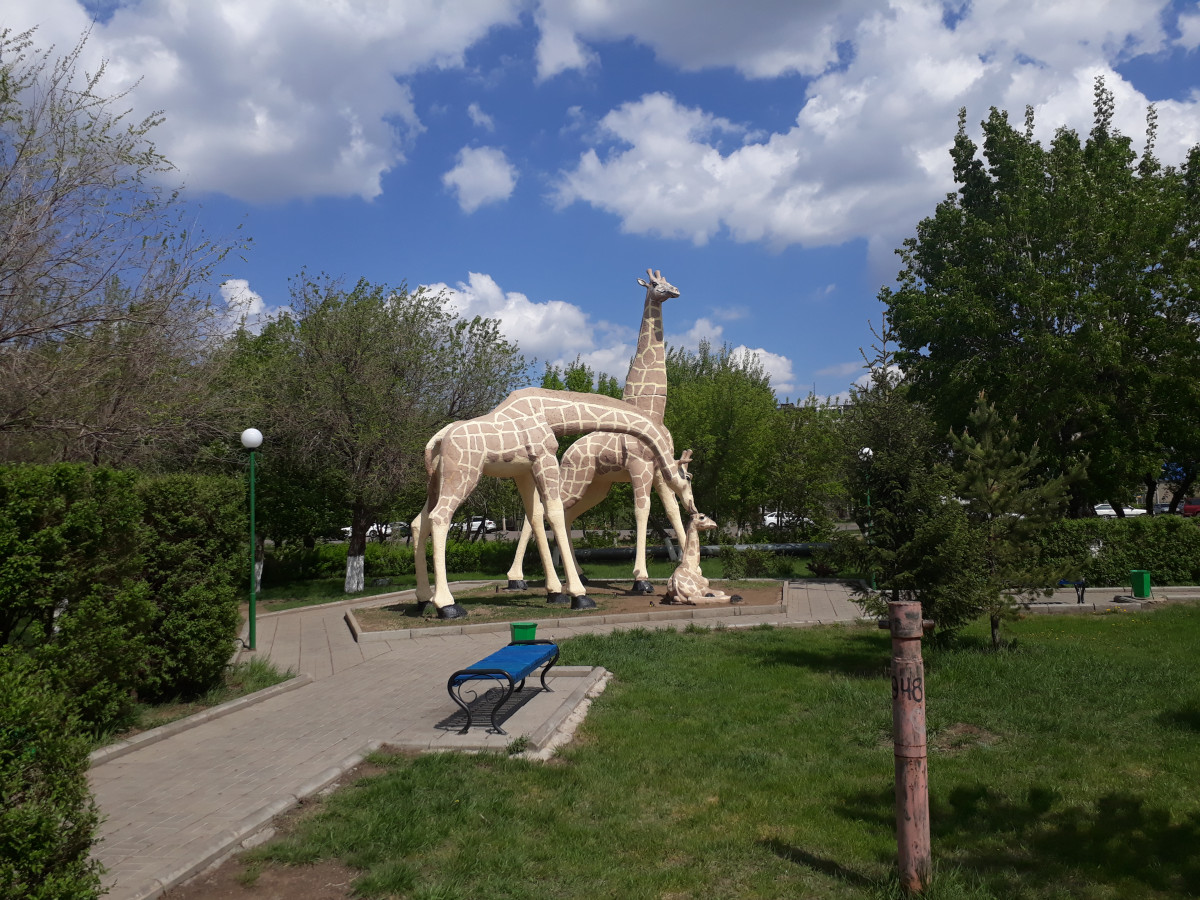 Another sculpture of an animal made by Ekibastuz master is in the village of Aleksandrovka. Here is a farm for breeding cattle. Therefore it was decided to make a statue of a bull in full size. More serious time consuming work of Gamal can be called sculptures of people. They are not a few too.

The gentleman of fortune

The Ekibastuz sculptor Gamal Sagidenov became really famous not only in the hometown but also outside of Kazakhstan, when he first carved a sculpture of Yevgeniy Leonov in the form of associate Professor from the movie “Gentlemen of fortune”. It was in 2011. 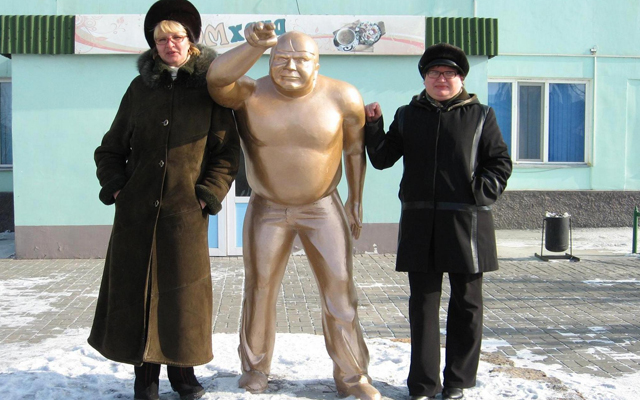 The monument was ordered by one of the local entrepreneurs to the fortieth anniversary of the publication of the famous Soviet Comedy. The monument of the Professor in the legendary pose with his fingers folded in “goat” caught the interest of the journalists of Republican editions. And the fame of the sculptor spread throughout the country. Then he was invited to the interview to Russian TV channels and Newspapers.

Gamal Sagidenov told about his creative plans, ideas and creative inspirations on the program “Talk and show”, gave an interview to NTV and “Komsomolskaya Pravda”. The “Bronze” Professor is on the outskirts of Ekibastuz now, decorating an area of the business entity. Visitors and passers-by do not miss the moments to be photographed with a legend of the Soviet cinema.

Accidents are not accidental

In an interview to the journalist of the Russian edition to the question about his plans for the near future Gamal Sagidenov said he was going to carve Jeanna Friske. In fact, he did not have such plans.

- I do not remember exactly, but, whether she was showed on TV at that moment, whether her song was played. And I said the first thing that came to my mind. I have never been Jeanna’s fan. Yes, she was a very beautiful woman and her songs and her voice are good. But reporters took my joke seriously and spread the news in many publications. But I am a man of my word! If I said (even if I said without thinking), then I must definitely do it. 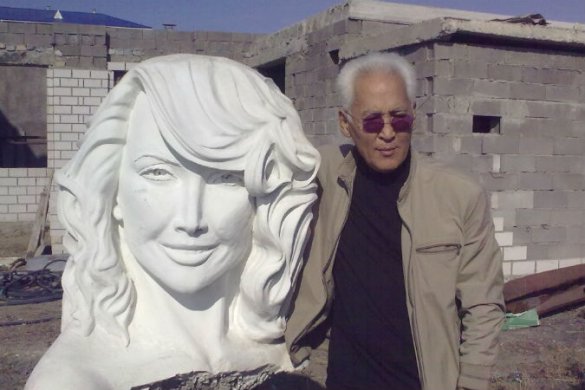 At that time, the Russian pop star was healthy, and nothing foretold troubles. Sagidenov asked Jeanna Friske herself the permission to use her image. A Moscow journalist has arranged a telephone conversation in which the sculptor told the singer about his plans and asked her to come to Ekibastuz with her concert after the installation of the monument in Ekibastuz. Friske gave his consent to use her image and promised to give a concert to the local population. But she suddenly fell ill.

During the singer’s life, the sculptor managed to make only her bust. At full height he made the sculpture after her death. Now six-meter Friske is in the yard of Gamal Sagidenov’s shop. Plans with transporting it home never came to life. After the sudden death of the singer, the sculpture had to decorate the courtyard of the school, where Jeanne studied.

The author decided that the next day after the incident, when he was attacked by journalists with questions about what he planned to do with the monument. But there were not any actions except words. The receiving party did not show the special interest, and the master could not afford to carry the sculptor on his own. Therefore, the author decided to leave the statue at home.

Local people repeatedly condemned the master for this choice.

- Why not someone from Kazakhstan? – distressed some countrymen. – You should have made Roza Rymbaeva - the authorities put forward their ideas. 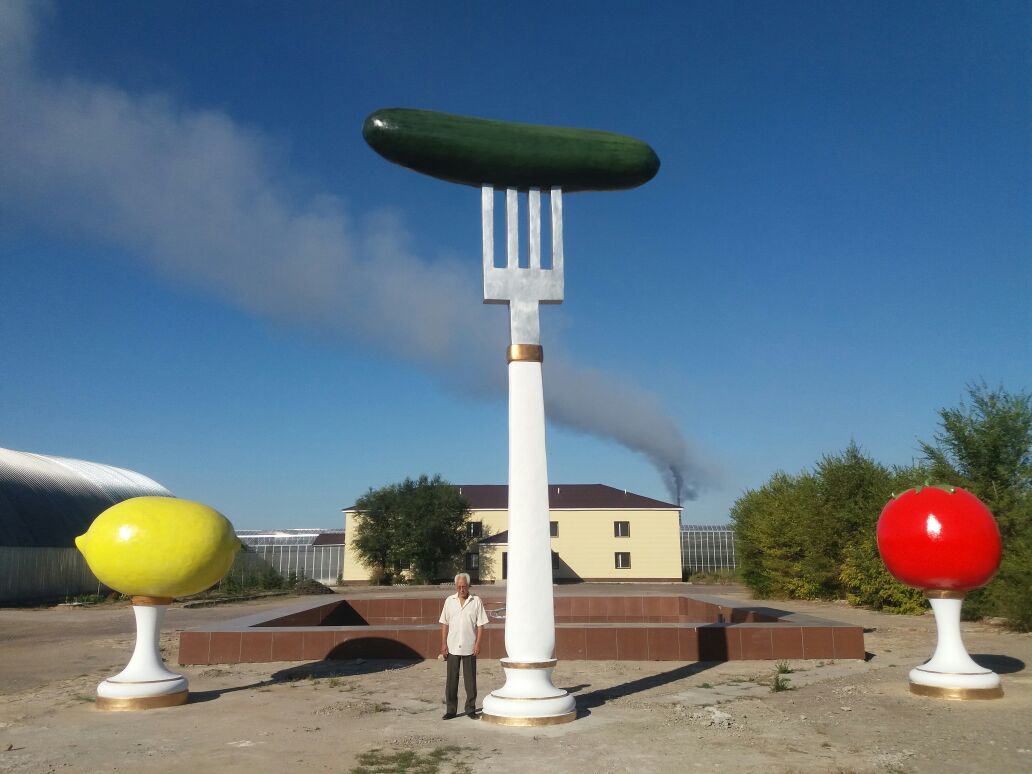 In 2016, the sculptor went to the village Topar, Karaganda oblast at the invitation of the local greenhouse complex. The owners of greenhouses wished that the master carved for them symbolic sculptures. Gamal immediately came up with the idea to make a lemon, a cucumber and a tomato. The cucumber was huge. In order to make it clearly seen from afar, it was installed on the fork.

The entire sculpture turned eight meters in height. And on the sides of the cucumber the giant tomato and the lemon were installed. Most of Sagidenov’s sculptures are impressive with their huge sizes. Locals often come here to take photographs with concrete sculptures of unrealistic sizes. 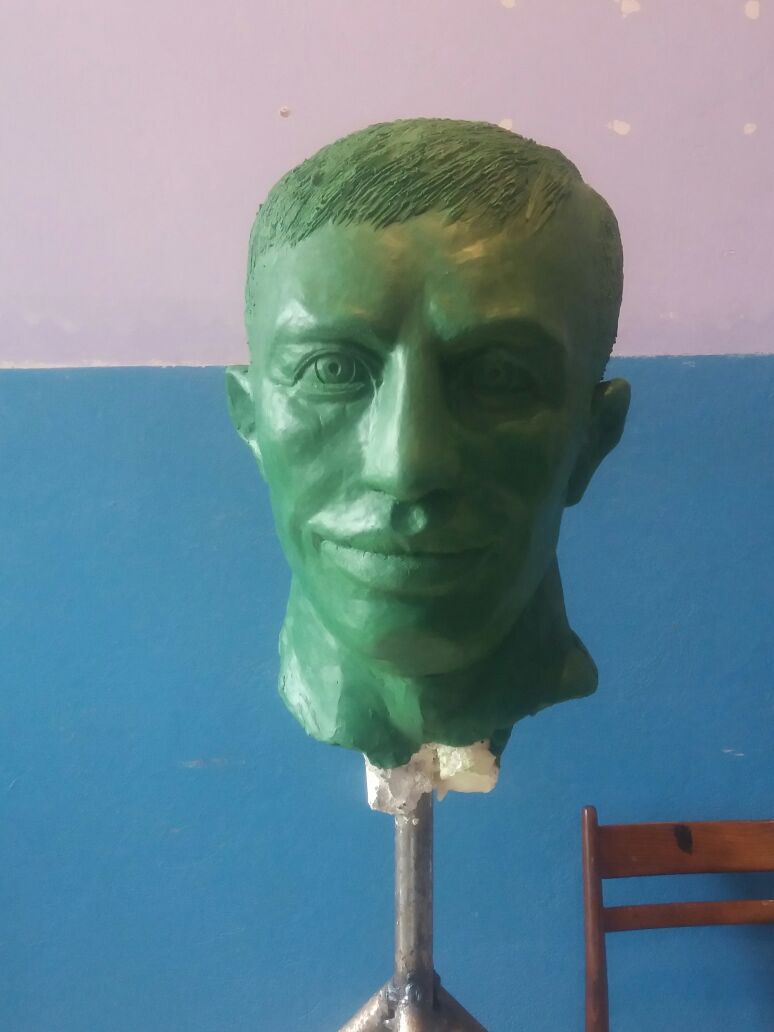 Another wave of popularity has covered Sagidenov, when he said that he would make Gennady Golovkin’s sculpture. This idea came to him during his visit to Karaganda oblast. Here he met with fellow countrymen and fans of the legendary Kazakh boxer and the world champion Gennady Golovkin.

Today, the sculptor has made a mock of clay. The world boxing star’s brother, according to Sagidenov’s words, said that the bust is very similar to Gennady’s. Inhabitants of Maikuduk, where Golovkin is from, also have seen the resemblance. The sculpture of the boxer will be made in natural size, when the master has received written permission to do that. 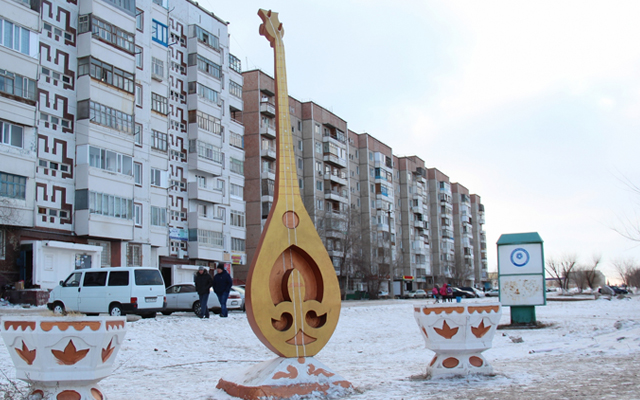 Just in Ekibastuz today there are more than forty Saidenov’s sculptures. In addition to above, they are the dombra on the road in the ninth district, the globe with doves near Kazaktelecom so similar to the one in Kiev, the pink flamingos in the eighth district, and many others.

Sculpture is not the only Gamal Sagidenov’s passion. Now the lonely cowboy, as he calls himself, is writing essays. Gamal joked that someone can be offended to the question about its name. And he is also an aircraft designer. He invited me to fly on a plane made by hands together with like-minded friends. But about this will be next time, if I survive.