Nikolay Gorbunov: Assembly of people of Kazakhstan has become a part of our lives

Ethnocultural association "Aleph" was established in 1993 on the initiative of the Jews living here, mainly it was the intelligentsia, teachers, elderly people.

Deputy chairman of the Jewish cultural-educational and political association "Aleph" in Astana Nikolay Gorbunov told about work of the cultural center, and also about interesting traditions which Jews adhere to.

—Could you tell us about your ethno-cultural association? Why is it called "Aleph"?

—Our Jewish ethnocultural association "Aleph" was created by the initiative group in May 1993. The name "Aleph" means the first letter of the Jewish alphabet and symbolizes leadership, always be ahead. Feature of our center is that we live our traditions. We do not propagandize it as much as we offer that, so all who have Jewish roots and citizens of Astana could get acquainted with culture and traditions of the Jewish people. We represent the city Assembly of people of Kazakhstan in Astana. We do not only work narrowly in our direction, we visit each other, get acquainted closer with other associations, the favorable atmosphere is created. We share our culture, and the Jewish is one of the oldest. We can freely study the language, culture, traditions and everything that is dear to us.

—How many members are there in your cultural center?

—Today, we have about fifty people in our center. However, the numbers can change because new people come, someone goes to study, retires, someone leaves the center. The Rules of the center provides that any person can be a member regardless of their nationality. Therefore, the doors of our cultural center are open to all those who are interested in Jewish culture. —Is there a Sunday school at the cultural center?

—We don't have a Sunday school, but we do have classes for children to understand the traditions and pass on the values of the Jewish people to their children. We hold holidays, organize children's matinees. I also teach ancient Hebrew, the language of ancient and modern terminology, Judaism philosophy. I also give individual lessons for those who wish

—Are there any dancing or vocal groups at the center?

—We have a creative team called Nigun-Atik, which means "ancient melody". There are concertmasters and musicians among the members of the group. We also sometimes perform dances. There is a variable and permanent line-up.

—What international cooperation do you have?

—We cooperate closely with the Embassy of Israel in the Republic of Kazakhstan. Sometimes artists, creative teams come from Israel, they invite us, we, in turn, invite them to our events. We promote association of friendship "Kazakhstan-Israel". We have a twin-city in Israel too and we organize tourist group trips to Israel as well. 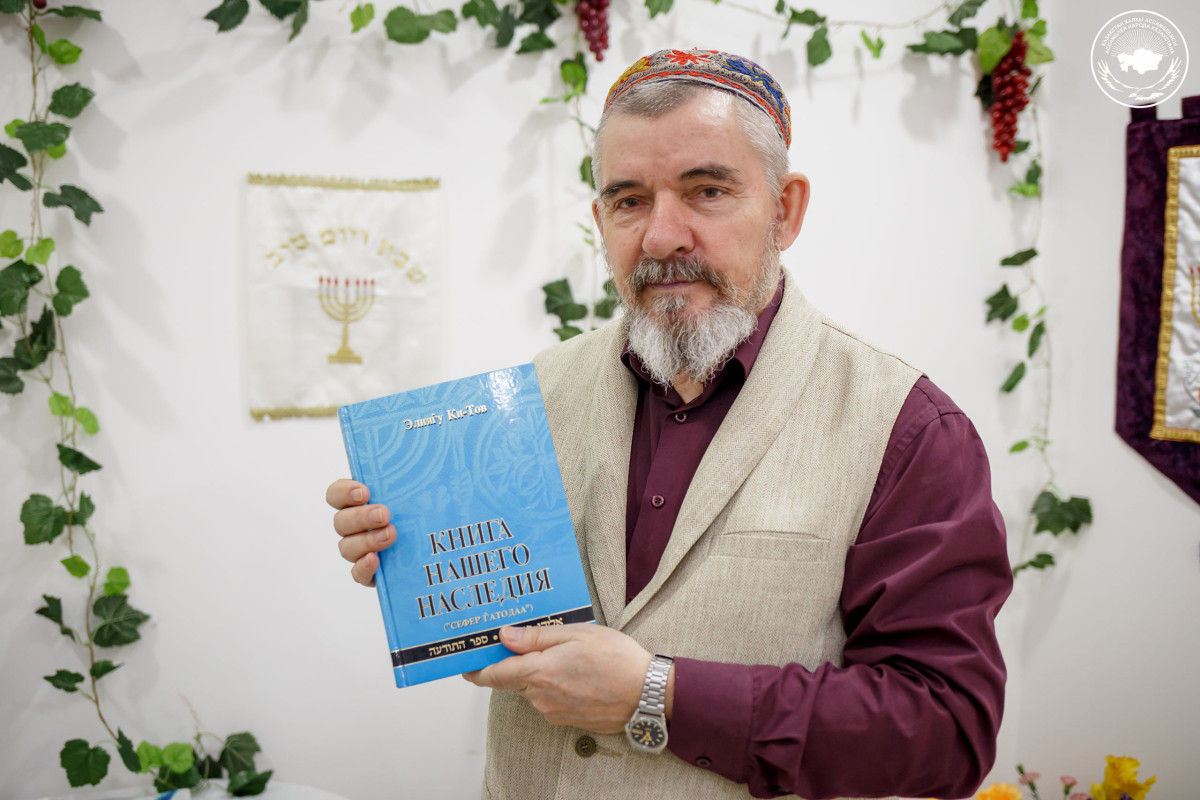 —Which holidays are celebrated in the center?

—Recently we celebrated the holiday Purim – a holiday in memory of the miraculous rescue of Jews in the Persian Empire more than 2400 years ago, during the reign of King Ahashverosh (Artaxerx), which received the name from the word "pur", which means "fate".

One of the king's close associates, Aman, conspired to act against the Jews, tried to organize the extermination of the Jews and prepared a tree for their leader to be publicly punished. The king's wife was also Jewish, and she said to her husband all the insidious intentions of his counsellor.

Since then, two days after this date have become days of celebration and feast, the Jewish communities hold theatrical performances, carnival processions, and send holiday treats to friends. It is necessary to wear a costume for this holiday - a person should wear the outfit not related to his occupation. For example, we have a band-master. I told him: "You can wear any suit except the band-master’s one.

The Jewish calendar is full of many holidays: we have a Jewish New Year. Every new day of the month is also a small holiday, we trumpet into jafar horn.

Approximate date of the Jewish new year is the middle of September. There are special treats on the festive table with sliced apples and honey. When we congratulate each other, we dip apples in honey, treat a neighbor and say: "Let your new year be as sweet as an apple with honey. We also put lamb or fish head on the table with the wish that you should not be in the tail, but to be ahead.

We also celebrate Hanukkah in December. It is a Jewish holiday of miracle and the victory of light over darkness. Hanukkah means "sanctification", "housewarming". On this holiday, a nine-monk is lit in the temple. Special doughnuts are baked, treats and postcards are given. It is customary for children to give money so that from childhood they understand the value of money and learn to treat it with care. There is a big stereotype that Jews are rich and they pursue the purpose to get rich. Jews are actively engaged in charity work. Jewish organizations take leading positions in this regardless of the countries where they live. Jews from childhood accustom children to money so that they spend it wisely and so that they still have money left for charity. 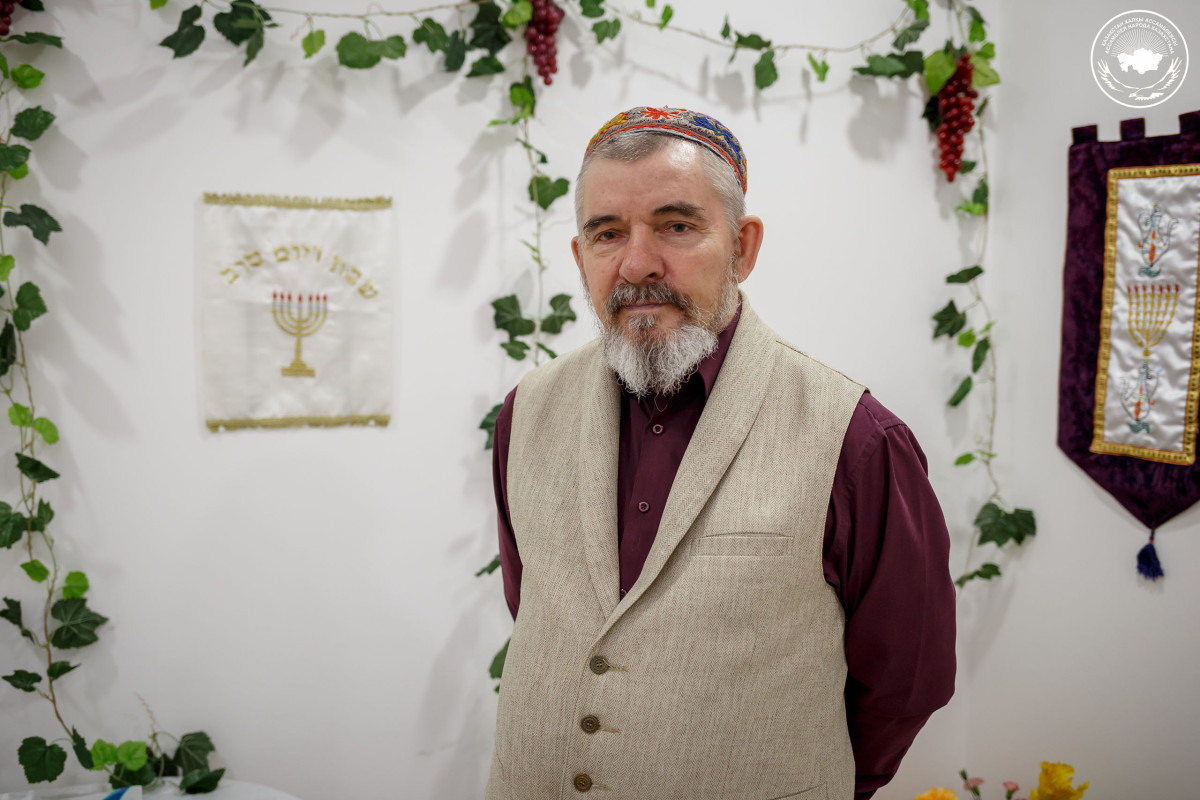 —Many people note that the Jewish people is one of the smartest. What is the secret?

There are things that many people do not pay attention to, ignore, or do not take into account. Today Jews are one of the oldest nations in the world. Some scientists, theologians, historians, linguists say that the oldest language was based on the language that Jews speak today. But the question is not the language, but the continuity of generations. There are modern laws of development of minorities, we see that new people in the historical periods. At first it was some regional association, then it became national, the inhabitants of the region became an independent ethnos. When they unite, they start their chronicles from the day of unification. Since ancient times Jews were independent nation which has remained till now. When there is a general development of culture, history, humanity, the current generation is more developed than the previous one. Something is updated, each generation brings its own new. This historical stratum plays a big role in saturation of knowledge of modern generations. The most important secret of the Jews is the historical layer, the continuity of generations.

—What does the Assembly of people of Kazakhstan mean to you?

—I am very fond of ethnography, linguistics, and I am very interested in the origin of people, their culture, traditions, common origins. In this respect, I am very interested, I can realize myself here. I am happy to promote Jewish culture, we participate in the social life of the city. It is very interesting for me to celebrate state holidays with the Assembly of people of Kazakhstan, to show our friendship and tolerance. We have become so close together that it has become a part of our lives, it is like air, oxygen for us. All people present here are real patriots of Kazakhstan, they found themselves here, develop, remember their roots. Together we are doing the common thing in a good cause.