Elmira Petrosyan is the Chairman of “Airenik” Pavlodar Armenian Cultural Centre. The community does a lot to revive Armenian culture, traditions and the language. Elmira Petrosyan told about the centre and activities held by community.

—Could you tell about the history of your cultural centre? Why did you give the name “Airenik”?

The first constituent meeting of the Armenian community was held two decades ago, on 24 February 1995, it was decided to establish the Armenian national cultural centre "Airenik" and its Board. The First Chairman of the centre was Serzhik Martirosyan, who headed it for more than 8 years. From 2004 to 2006, the centre was headed by Vyacheslav Iordanyan, veteran of labour. Then, Kamo Badoyan was the Chairman of the cultural centre and Elmira Petrosyan took over him later.

The purpose of creation was strengthening peace and consent in the region, the revival and preservation of Armenian culture, history, customs and traditions of its people.

The community has its Council of Elders and a youth association, a literary society and a dance group.

The Armenian community of Pavlodar region has always been proud of people who have left an indelible mark on the economy, culture and social sphere of the region.

We, Armenians of Pavlodar, took the idea of creating a centre with such enthusiasm, it seemed it is a small matter to write the regulations of the future centre and outline plans for the near future. But when the difficulties started, it turned out that it was not so simple, we were ready to abandon that idea. It is the time to remember Kanat Darzhuman, whose contribution in revival of national culture, traditions and customs of people, living in Pavlodar region cannot be overestimated. He became one of the first leaders of the small Assembly of people of Kazakhstan of Pavlodar region, he earned the love and respect of people of different nationalities. He gathered all of us and delivered such speech that we the inspired the idea of creating an Armenian center again for a long time and seriously. He was a broad-minded man! He knew about Armenia so much that we were amazed at the depth of his knowledge about Armenian history and culture. Kanat Bolatovich personifies the Kazakh people with its spiritual breadth and generosity, openness and ability to empathy for me. We put the monuments and busts of different people, and I want to suggest to put a bust of Kanat Darzhuman in the square of House of Friendship.

The Armenian people can be proud of ancient history and rich culture. The special pride of the Armenians is the fact that in 301 Armenia became the first country to adopt Christianity as a state religion. Another curious fact: out of 15 million Armenians, only three million live in Armenia itself. The largest number of Armenians live in Russia and America and many of them live in Iran. The tragic events in the history of the Armenian people scattered Armenians around the world. 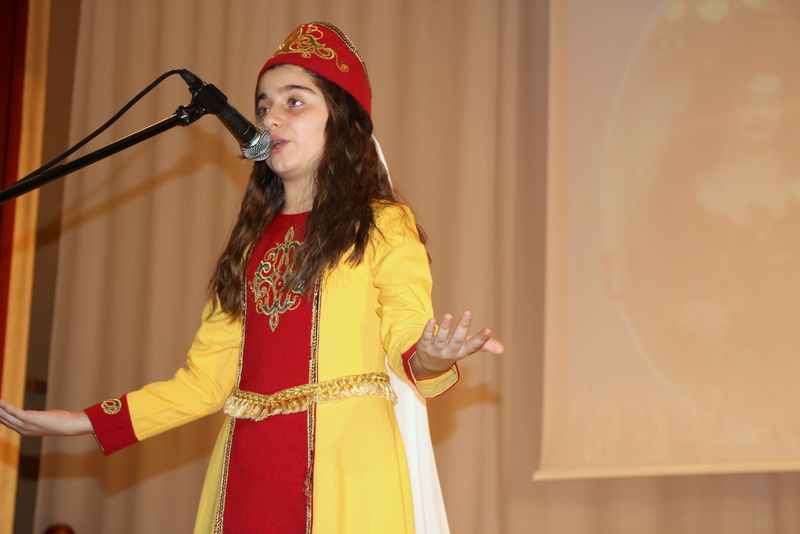 —What can you tell about the famous people of Armenian community?

—About thousand Armenians lived in Pavlodar region when the cultural centre "Airenik" was created and there are so many people that are known to all Pavlodar people. Grigory Osipyan, whose childhood was spent on Moscow Arbat, was the son of the royal officer. The war of 1914, the revolution, again the war, but already civil changed his fate radically. After graduating from the Institute of Railways in 1934, he arrived in Kazakhstan and became a Pavlodar citizen. More than half a century he devoted to the railway, he has done a lot of good deeds. Gregory Levanovich is an uncle of the writer with the world name – Sergey Dovlatov. Many good words were told about Vyacheslav Iordanyan and Kamo Badoyan. Vyacheslav Petrovich's wife was a Kazakh woman and they were able to honour both Armenian and Kazakh traditions and customs in the family, it is a worthy example to follow. Many Pavlodar locals heard the name of Michael Zakharyan, he headed adaptation for the screen in the region for many years. Almost all the cinemas in Pavlodar were built under his direct supervision. His last project was the cinema "Bayanaul" that was lost by the city.

Karlen Grigoryan is one of the famous persons in Pavlodar. Forty years ago, he arrived in Pavlodar on assignment after graduation from the Ivanovo branch of the Moscow Sports Institute. More than twenty years he has worked as Director of Pavlodar school of the Olympic reserve which gave many eminent trainers, prize-winners-weightlifters, skaters, "wrestlers" to the country. During the years of leadership, eight masters of sports of international class, 492 masters of sports and 918 candidates for this title and 1,200 athletes with the first sports category were trained. Many Pavlodar residents know him as Director of Pavlodar sports and health complex "Shymyr". In 1989, when a terrible earthquake occurred in his native Leninakan, he did not hesitate to leave Pavlodar and went to Armenia. He helped to restore the ruins of his native city, and three years later he returned to his second homeland, Kazakhstan. This strong act completely characterizes the person. As the Ambassador Extraordinary and Plenipotentiary of Armenia to Kazakhstan Eduard Hurshudyan wrote "We have developed a gene against failures and difficulties". Maybe this gene is like a drop of the ocean, which is inherent in every Armenian? The gene that helped to endure genocide wandering around the world and survive natural disasters that hit Armenia in the 20th century?

Karlen Artavazdovich said that they took strong roots in Kazakhstan. We connect the future of our children and grandchildren with it, rejoicing with all our heart for the success of Armenia. The main task of our centre was and remains the revival of national culture, language, history, customs and traditions of the Armenian people and mutual enrichment of cultures of different nationalities living side by side on Pavlodar land. A great contribution was made in this case by activists of "Airenik": G. Akopyan, M. Agekyan, A. Gyurjyan, A. Efremyan, S. Martirosyan, E. Petrosyan, S. Arakelyan, and many others Pavlodar Armenians.

"The historical homeland should help its community with literature in their native language, new methodological developments. After all, we have our own Sunday schools, there are teachers who do not allow children to forget traditions and language" – that Grigoryan's urgent request was heard in Armenia. And in 2004, Susanna Arakelyan, teacher of Armenian language, came from Armenia to Kazakhstan. She works at school of national revival in Pavlodar on her author's development and makes collections herself.

I was born and grew up in Azerbaijan, I studied in Ukraine, after marriage I came to Pavlodar, it became homeland for my children. They consider Kazakhstan their native land. Today we can do what we love and benefit the state. The Kazakh people are friendly and warm everyone with their hospitality.

Both Armenians and Kazakhs should know their ancestry to the seventh generation. Marriages between people who are in such relationship are prohibited. We recalled the meetings with Vice-Minister of Education of the Republic of Armenia Manuk Mkrtchyan, who liked "Airenik" very much. We also remember the Armenian, whom all Kazakhstan knows and honors – Levon Mirzoyan. He was called respectfully “Myrzazhan” by people. In the period from 1933 to 1937, he led the Kazakh Republic and left a good mark in the memory of the Kazakhs. Later he was accused of Kazakh nationalism and was shot in 1939 in Lefortovo prison. It is noteworthy that it was the Chairman of the Association of Armenian cultural centers of Kazakhstan Artush Karapetyan who wrote a book about him.

—What kind of activities are held by the cultural centre? What national holidays are celebrated?

— The community has recreated many Armenian national holidays and traditions. A lot of work is being done to educate young people to respect the older generation. "Airenik" takes an active part in all city events and festivals with great pleasure and organizes them for members of its community. The traditional holiday of the centre is Mother's Day, the Armenians treat it with great respect. Armenian women can be envied – the one who did not have time to congratulate his mother, wife or sister on March 8, can do it for a month – until April. It is this month, Mother’s day is officially celebrated in Armenia and abroad. One of the favorite holidays of Armenians is Navasard – New year. All families hurry on children's New year's party organized by the centre: from young children to grandparents. Favorite national holidays are "Jan Gulum" (feast of flowers), "Celebration of motherhood and beauty" (April 7), "Vartavar". Armenians are very sensitive to Armenian Genocide Remembrance Day (April 24) and Remembrance Day of Earthquakes Victims. The activists of "Airenik" can remember many things with pride for the work done, because they have come a long way in 20 years.

The spiritual symbol of Armenia – Khachkar-was consecrated on the territory of the Annunciation Cathedral of Pavlodar in 2004. The initiators of this great event for local Armenians were brothers Mikael Agekyan and Zhora Vardanyan, Gnel and Artavaz Akopyan, other members of the Armenian community, who dreamed to have a place to worship far from their historical homeland. "Khachkar" became the spiritual centre of Pavlodar Armenians, they come here in the days of grief and on holidays, bring flowers, put candles.

Every year more and more Pavlodar citizens and guests of the region get acquainted with the Armenian culture and history. The most important thing is that new generations of Armenians in Pavlodar return to their historical roots, learn to speak the language of their ancestors. As the Armenian poet said "With what heart will your native language embrace you with the stems of Armenian roses". Each nation is unique, but there are eternal, common to all people spiritual values: faith, love and mercy.

Eid Holiday Was Marked In the Assembly’s Park in Pavlodar