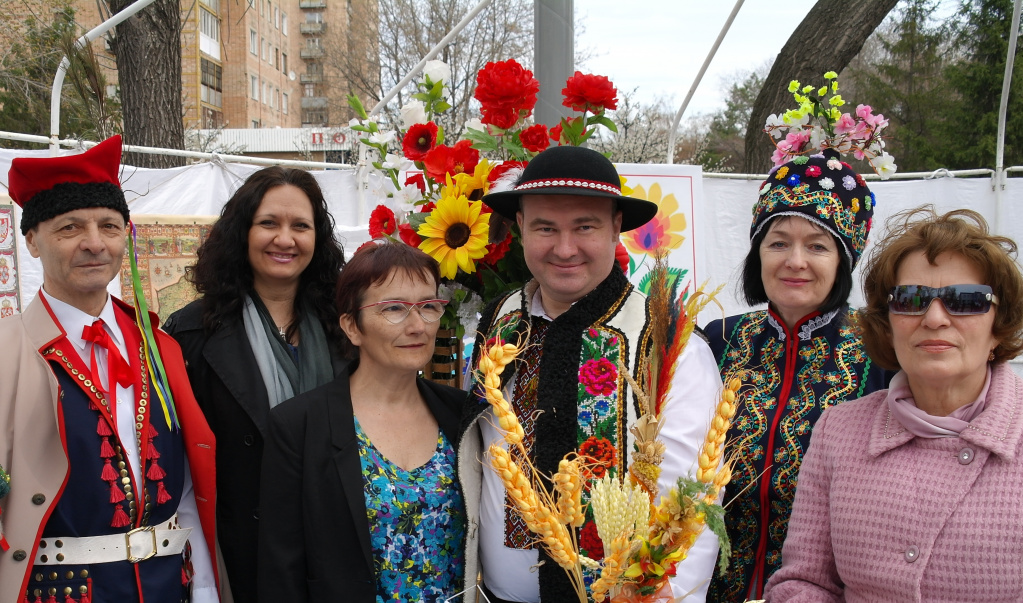 The Regional Polish Cultural Center Copernicus was registered on 29 November 1996. A.A. Krashevsky, G.S. Budko, A.M. Zainchkovsky, A.I. Zelizetsky, E.V. Khorolskaya, N.A. Volskaya and N.V. Pekarskaya stood at the origin of its establishment. The need to create a Polish association arose long ago, but the fear (left by Stalin's repressions) and inertia of the Polish ethnos for 3 years hampered the registration process. Nina Pekarskaia was elected as the first chairwoman of Copernicus Polish Cultural Center. The main activity of the center was cultural and educational work, revival and cultivation of Polish customs and traditions, holding contests, development of amateur art and study of the Polish language. According to the Constitution, any person who is interested in the Polish language, culture and history of Poland, regardless of nationality, can be a member of Copernicus center. In 1996, the folklore group "Jaskółeczki" (Swallows) was created, which actively participates in the events devoted to the State and National holidays of Kazakhstan and Poland. The participants of the group left with the concert program in Ishim - 2001, and on a festival in Kokchetav - 2005. The group is noted by gratitude of Mayor of North-Kazakhstan region in 2003.

The first teacher of Polish language Danuta Valyashek has arrived in 1997 and taught Polish language, traditions and culture for children and adults 3 years, till 2000. Graduates of schools and colleges with Polish roots had the opportunity to enter Polish universities on preferential terms, and students of domestic universities with good academic performance - to receive a scholarship from public organizations in Poland. The regional mayor office has provided and renovated an office in the city centre and periodically allocates funds for festivals.

Since January 2007 Anatoly Krashevskiy has been the chairman of "Copernicus". Now the work of the regional Polish cultural center "Copernicus" is directed not only on studying of the Polish language and preservation of the Polish customs and traditions, but also on education of the adequate model of behavior at the young generation of Poles, promoting maintenance of atmosphere of consent and mutual trust, high efficiency in joint activity. And therefore, to eliminate intolerance towards people who differ not only in the language of communication, cultural values and social experience, but also in their inherent anthropological differences. As exactly in youth environment that living type of personality which will develop, dominate and define the future of Kazakhstan is formed.

The members of Copernicus center conduct huge cultural and educational activities. The centre's work in this direction is very rich and interesting.The cooperation established and consolidated with Petropavlovsk Higher Military School; the regional library named after Sabit Mukanov; North-Kazakhstan Regional Museum of Fine Arts; North-Kazakhstan Regional History and Local Lore Museum; North-Kazakhstan Regional Russian Drama Theatre named after Nicholas Pogodin; chamber choir of the regional philharmonic society; vocal group "Mriya" from Bishkul village of Kyzylzharsky district; regional and city mass media and others. Eight exhibitions of painting, graphics and decorative and applied art were organized and held, three of which were international. It should be noted that these exhibitions were held in the Regional Museum of Arts of Petropavlovsk. It not only raised the status of exhibitions, but also emphasized the importance attached to youth creativity not only by the organizers of exhibitions, sponsors, but also the media, as well as representatives of the mayor offices of the region and the city.